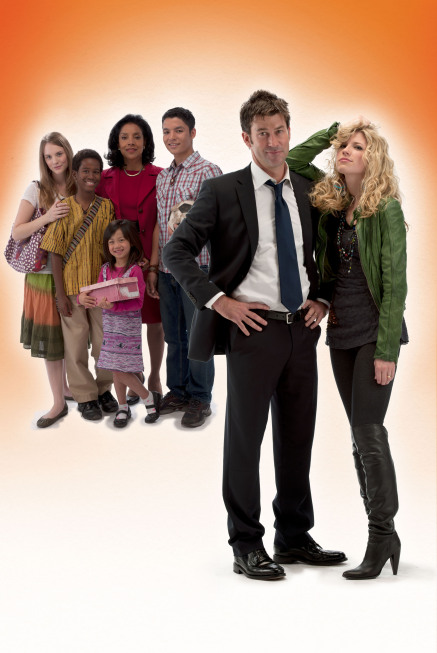 "American Idol" alumni are determined to take over the world of entertainment.

"It was definitely something that I wasn't anticipating," White says. "It kind of came out of left field. At first, I've got to be honest, I wasn't sure if acting was something I even wanted to do. I wasn't out auditioning or doing anything like that. My first day on set I hyperventilated a little bit, thinking I don't know if I'm cut out for this. Then we got to filming, and we got a week in, and I had been bitten by the acting bug and completely fell in love with the experience. It was better than anything I could have planned for myself."

In "Change of Plans," White plays Sally Danville, a "free-spirited musician" - she knows, it's not a big stretch - who roams through live with her husband (Jason; "Stargate: Atlantis" vet Joe Flanigan) free from anything that would tie her down. When her best friend unexpectedly dies while serving in the Peace Corps, Sally and Jason are left with custody of four children (three adopted from another country).

In keeping with the film's title, the couple is thrust into a completely new and unforeseen situation. Ultimately, the Danvilles discover a life that is more rewarding than any other they could've imagined.

"I think it's such an endearing, sweet film and it's all about these little moments between the characters, I think, that really define the story and just the whole theme of sometimes the change of plans are better than anything that you could have come up with yourself - like this acting gig," White says.

Though singing will remain her day job, White is interested in continuing to explore her theatrical side ... though she's not quite certain what her next role might be.

In the past two months, "American Idol" finalists have popped up in a variety of different projects. Carrie Underwood co-hosted the Country Music Awards; David Archuleta performed on "New Year's Eve Live on FOX"; Hudson performed on "Dick Clark's New Year's Rockin' Eve with Ryan Seacrest," and has appeared in TV commercials for Weight Watchers. Even former "AI" host Paula Abdul is getting in on the act, debuting reality competition series "Live to Dance" this past week on CBS.

"You know what, really, 'American Idol' gives us a massive advantage, and that is to be seen - not just heard, but to be seen," White says. "We're really presented to people, not just as singers, but as people. I think that gives us a connection. When you're in people's living rooms week after week you really do make that connection with people. So when you come off the show, it's amazing. When I see people on the street they ask me funny things, like, 'Are you still a nanny?' or 'Do you still play barefoot?' or 'Did your husband cut his hair?' - like really funny questions - or 'I'm sorry that you missed your sister's wedding.' People pick up on these little personal elements about who you are, and so I think, because of that, it lends more opportunities to us. TV and film and commercials, those things are opportunities that come, those are the doors that open from 'American Idol,' and we're very, very fortunate. The trick is just to keep them opening and to keep walking through them."

In addition to acting in "Change of Plans," White sings three songs - all of which are co-written and produced by "American Idol" judge Randy Jackson.