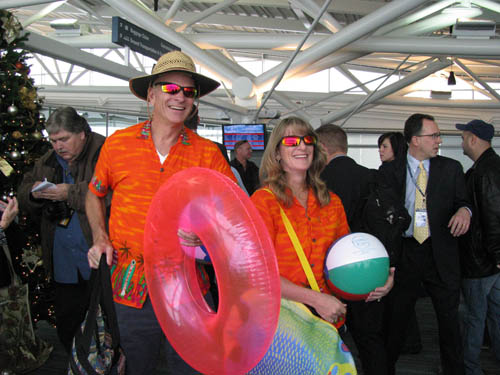 Lynn Dominique and Shelly Norman of the Greater Fort Walton Beach Chamber of Commerce in Florida (photo No. 1) attracted attention as they got off the first Vision Airlines flight (photo No. 2) to snowy Niagara Falls International Airport on Dec. 17.

"It's freezing!" said one passenger getting off Vision Airlines' first flight from Florida to Niagara Falls International Airport on Dec. 17. "Can I build a snowman?" asked another.

The low-cost airline, based in northwest Florida, celebrated its debut at the Niagara County airport by bringing up from Florida a delegation of elected officials, tourism representatives and members of the press.

Local officials greeting the passengers coming off the plane smiled at the antics of several passengers wearing shorts and carrying beach toys.

"We said, 'Yeah, why not, why don't we dress like we got on the wrong plane?' " said Ron Grissom of the Greater Fort Walton Beach Chamber of Commerce. Then, he confessed, they were just along for the ride and were going back to 70-degree weather on the immediately outgoing flight.

A check back this week with members of the delegation, who didn't return to Florida until Sunday, revealed an enthusiastic reception of all this area has to offer, despite the cold and snow during their visit. All said they planned to return for more leisurely visits. Crammed into their brief weekend stay were stops to see Niagara Falls area attractions, plus a quick Buffalo tour.

The falls themselves were an "of course" vote for best attraction, but the visitors applauded the variety of other attractions, the scenery and the restaurants they visited.

Wayne Harris, District I commissioner for the Okaloosa Board of County Commissioners and director of the Crestview Area Chamber of Commerce, said he grew up in St. Louis and has lived in other cold climates, so the weather wasn't a big issue for him, although his comment on an early morning visit to Old Fort Niagara was "Boy, it was cold out there!" Harris also mentioned learning about the area's connection to the Underground Railroad, losing at the Seneca Niagara Casino ("but that's not unusual for me") and enjoying a meal at the Red Coach Inn. He even brought back some homemade sausage from The Natural Link in Lewiston.

The people he met made the biggest impression.

"The reception we got was absolutely phenomenal. Every place we went people were so friendly, and I don't mean just the tourism and airport people. People were wonderfully open and warm," he said.

Returning for another visit is not an issue with airfares as low as $79 one way, he said.

"I think the future brings a great partnership between our community and your community," Harris concluded.

Alabama native Kathy Newby, public information officer for the Okaloosa Board of County Commissioners, also said she thoroughly enjoyed her visit and mentioned that there are many things she would love to go back to with time to see more. Newby was impressed by the historic architecture in Buffalo and amazed by well-known paintings housed by the Albright-Knox Art Gallery since 1832. She'd also like to visit Niagara County's wineries on a separate visit - "I didn't get to have my ice wine, so I have to go back for that."

Newby was also happy to learn about Western New York's top-rated ski resorts. The closest place for Floridians to ski is the mountains of North Carolina, where much of the snow is man-made.

"You can't drive to North Carolina for what you can fly to Buffalo," she said, calling the low-cost fares a great opportunity for skiers.

"We enjoyed every minute we stayed and had a good time," said born and bred Southerner Randall Wise, mayor of Niceville, Fla., for the past 39 years.

It was the first time his wife had ever seen a lot of snow, and she got a kick out of throwing snowballs at him, he said. They plan to return soon, "probably when it warms up a little bit."

Wise enjoyed meeting fellow hunter Niagara Falls Mayor Paul Dyster and figures since the two of them became friends on the short visit, he'd make Dyster a challenge. Wise didn't get a chance to try authentic Buffalo wings while here, so he's challenging Dyster to send him some. In return, he'll send Dyster some smoked mullet from Niceville, "Home of the Boggy Bayou Mullet Festival," a three-day arts, crafts, music and fish event in October.

By Tuesday, Wise had already told friends about the Niagara area and dropped off a packet of information for the president of his local bank who plans a trip to Niagara Falls with her daughter.