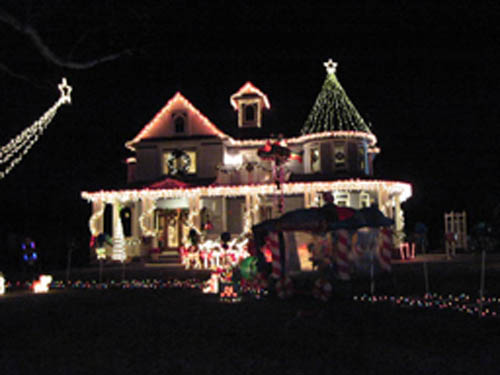 The Latko household in Youngstown.

One year ago, the quaint and quiet village of Youngstown burst out into a veritable winter wonderland. Three families were each given $5,000 and tasked with creating the most original, most elaborate, most over-the-top holiday display imaginable. We're talking tens of thousands of lights, an ice rink, a spinning ballerina, a giant blowup train and real-life soldiers, amongst other props.

As each family did its best to mimic Chevy Chase's Clark Griswold in "National Lampoon's Christmas Vacation" (figuratively speaking, of course), HGTV was on hand to film the friendly competition.

On Dec. 17, at 8 p.m., "Holiday Battle on the Block" will air highlights of the 48-hour race to hang a shining star from the highest bough. At the end of the one-hour episode, one winner will be crowned as champion.

Jodee Riordan, whose family competed against the neighboring Phelps and Latko clans, said the whole experience "was nutty."

"It all moved really fast," she said. "You realize that's there's not much ‘reality' in reality TV. We'd say something funny and then they'd say, ‘Could you do that again -- nine more times -- but could you be more spontaneous?' "

The Riordans opted to showcase Youngstown. They placed a village welcome sign and boats on their front lawn, and enlisted soldiers from Old Fort Niagara.

"It all turned out like we wanted it," Riordan said.

Her family enlisted the help of the Youngstown Yacht Club and volunteer firemen. They even went so far as to post messages online seeking extension chords to power 25,000 lights.

"I literally put on Facebook, ‘We need extension cords. Drive by the house and throw them on the lawn,' " Riordan said. "People did. I think we had 40-some extension cords at our house. It was nuts."

The Phelps family went with a "Nutcracker Suite" theme, which showcased their children as characters from the fairy tale. The Latkos, meanwhile, went with a "Candyland" theme that spotlighted Santa Claus on top of their house.

Osborne recalled, "It was really cold that night. (But) it was fun. We had some nice camaraderie between the judges. ... We had quite a time."

While each of the three homes scored high marks from the judges, Osborne said Youngstown and the River Region were the big winners.

"It's good for the area," he said of the national TV exposure.

The Youngstown episode of "Holiday Battle on the Block" is currently scheduled to air at 8 p.m. on Friday, Dec. 17, on HGTV. For more information, visit www.hgtv.com.

"You're going to be able to see your house from space," HGTV host Scott McGillivray