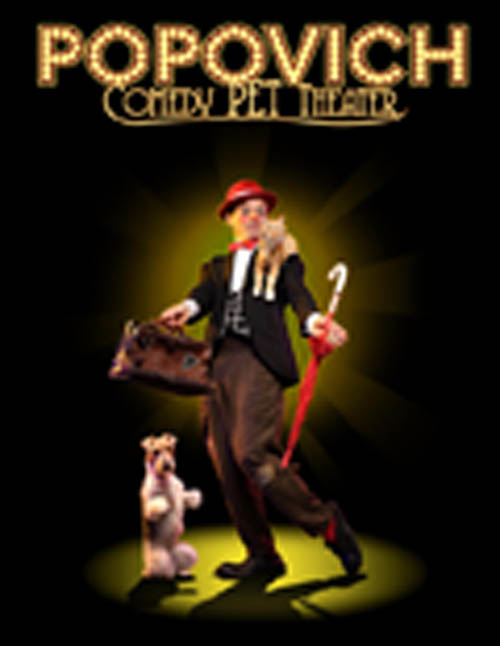 Ladies and gentlemen, children of all ages, step right up for the World Famous Popovich Comedy Pet Theater at Artpark. Award-winning Russian circus entertainer Gregory Popovich and his entourage of furry four-legged performers take over Artpark's Mainstage Theater on May 17, 2011. Two hilarious performances will be presented at 10 a.m. and 5 p.m. with tickets at just $6 ($5 before Feb. 1).

The Popovich Comedy Pet Theater is a family-oriented blend of unique physical comedy, juggling, and balancing skills of internationally acclaimed circus performers and the extraordinary talents of 26 performing pets. To date, the show features 16 cats and 10 dogs, all of which have been rescued from animal shelters across the country.

"I've actually nicknamed my show 'A Second Chance,' because that is what my kitty cats and dogs have been given, a second chance at life," says Popovich of his pet performers.

The entertaining Popovich and his Comedy Pet Theater was voted "Best Family Attraction in Las Vegas" and has appeared on "The Tonight Show with Jay Leno," "The Late Show with David Letterman," on Animal Planet and as a finalist on "America's Got Talent." For more information, photos, and videos visit www.artpark.net.

Tickets for both performances can be purchased by calling the Artpark Box Office at 754-4375.