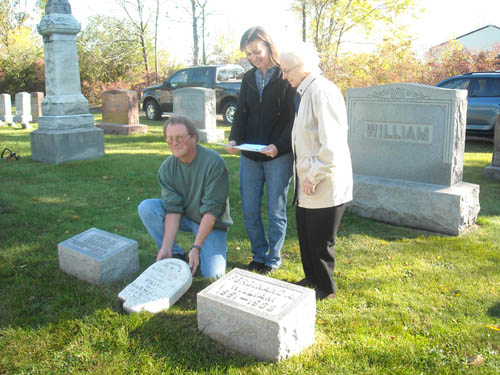 Williams family descendants place the gravestone of August Williams in the family plot at St. James Cemetery. From left are Bruce Genewich, great nephew from Lockport; Ann Clingersmith, a great-great niece from Niagara Falls and Imogene Genewich, a niece from Lockport.

The stone had been in the back lot of a house in Lockport, buried under brush for some years. The current owner of the former Williams residence did not want to keep it, and sought assistance in finding out where it belonged.

Ann Marie Linnabery of the Niagara County Historical Society, with the help of Lockport resident Richard Williams who did the Williams family tree and Elaine Timm of the local Historical Society of North German Settlements, was able to determine where little August was from and who the living relatives are. The relatives were then contacted and picked up the stone.

August was born July 29, 1876, and died Sept. 6, 1877, in Bergholz. He was the second child born to Ferdinand and Lydia (Walk) Williams. They were members of St. James, and are buried in the Niagara Road cemetery. According to Timm, little August's body may be in the old St. James cemetery on Rohr Street in Bergholz, since that was the cemetery being used in the 1870s.

Since it is not possible to determine exactly where August was buried, it was decided that his stone should be placed with his parents' in the family plot.

Why the stone was in Lockport is still a mystery, Timm said. The Lockport branch of the family may have purchased the stone, since the local family was probably a poor, farm family, and for some reason the stone never got here.

The original surname of the family was William, but Williams has been used for years, Timm said.