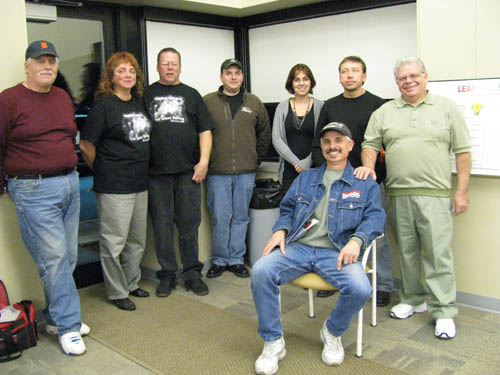 'Things that go bump in the night'

Town of Niagara Supervisor Steve Richards was working late one night in 1996 in his Town Hall office, when he heard footsteps. He came out and looked down the hall.

It sounded like the footsteps were going into the Water Department. It happened twice more that night, but still he was alone.

Is Town Hall haunted? Well, there was the cleaning lady, who left her mop and bucket in the middle of the floor one night and called the next day refusing to ever come back to the building and asking that her check be mailed. Or what about the police officer who wouldn't come inside Town Hall whenever he worked the midnight shift? He was working late one night when he heard noises in the adjoining court office. He opened the door. No one. A little later, he heard noises again, and once again opened the door. No one -- but file cabinets were hanging open.

What most people don't know about Richards is the incidents at Town Hall planted a seed of interest in the paranormal that has grown over the years to the point he is now a member of a group of local residents who call themselves the Dark Starr Paranormal Research Society.

Richards and members of his group spoke about their experiences and equipment used in ghost hunting during a program for Niagara-Wheatfield Adult Education held Oct. 21 at the high school. Many in the large crowd had unusual experiences of their own to relate.

Richards said that after the Town Hall incidents, he was part of a group, including a psychic, who spent the night in the building. The psychic said the spirit was a murdered woman looking for justice.

He recommends those looking for a paranormal experience visit the Iron Island Museum on Lovejoy Street in Buffalo, where both daytime and overnight visits are available and numerous visitors have reported strange experiences, noises and sightings of a "shadow man." The museum was declared haunted by TAPS on the "Ghost Hunters" show on the Sci Fi channel in 2008.

On one visit, Richards felt someone tug at his arm, said, "excuse me" and turned around to find no one (living) near him. Fellow Dark Starr member Christine Kramp of Town of Niagara remembers the feeling of somebody touching her hair there. "It makes you wonder what is out there," she said.

Another interesting spot for a first ghost hunt is Rolling Hills in East Bethany. A Grand Island man bought the old insane asylum for an art center. One day, he didn't come home to Grand Island. When his family went to search the apartment he kept at Rolling Hills, they found the door locked and the inside of the door had scratches on it, but nobody was there. Years later, a woman taking a tour there entered the room where the man's portrait is displayed and screamed that he had been behind her in line.

One of the rules of paranormal investigation is always hunt in pairs, Richards said. One member of Dark Starr learned to follow this rule the hard way.

New member Jim Szwedo, who owns the old Pharaoh's nightclub on Whirlpool Street, invited the group to explore. A young woman had been murdered there about four years ago and her body and the building set on fire. Police brought in a medium and found there were some areas of the building even she refused to enter.

On Dark Starr's tour, Town of Lewiston resident David Slusser went to the basement on his own and opened a walk-in cooler. He felt heaviness from the top of his head to his knees and it seemed like the energy was being pulled from him. "I asked it to stop; it kind of did."

Richards showed film of Slusser reaching the top of the stairs to rejoin the group and collapsing as he told his story. The film, checked later, also showed a glowing orb (believed to be a spirit) leaving his body.

Dark Starr members also toured the old Boys and Girls Club on Portage Road in Niagara Falls, which also is owned by Szwedo. It originally was a honeymoon house built for a member of a prominent family in 1901. There they found ghosts of children in the basement, who answered questions by turning their flashlights on and off. Their camera also captured a light that shone at the top and along the side of a staircase where a child had reportedly fallen.

Dark Starr members are looking for others interested in the paranormal to join their group. They'd especially like to find a member who can build websites.

Investigating the paranormal isn't for everyone, but "I find it fascinating," Richards said.