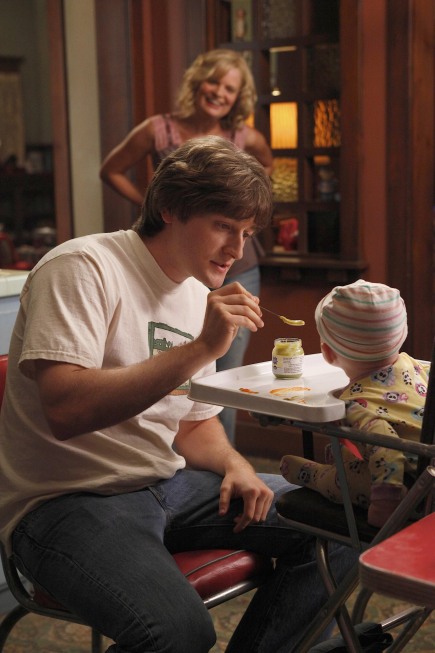 Let's face it. Sitcoms, for the most part are not funny.

Cute, perhaps, or charming; amusing; even romantic or heart-string-tugging at times. They're just not especially full of, you know, actual laughs.

Since 2005, about 40 primetime sitcoms have been pulled from network television. With today's increasingly splintered TV audience (roughly the same amount of people watch "Teen Mom" on MTV, WWE wrestling on USA, "Hell's Kitchen" on Fox and "The Event" on NBC, for example), sort-of-funny-but-not-really isn't going to cut it.

So, when Greg Garcia was penning "Raising Hope" for Fox, he decided his script had to go in a different direction. Instead of a dysfunctional home revolving around a schlubby husband or sarcastic underachiever, his show centers on the simply outrageous antics associated with Hope, a newborn baby raised by the mostly unqualified Chance family.

Week in and week out, Hope finds herself in comically inappropriate situations (crawling through a hoarder's garage paradise, for example, only to be sucked back by a vacuum cleaner). Her 23-year-old father, Jimmy (Lucas Neff), does the best he can to prevent such situations. But, grandparents Virginia (Martha Plimpton) and Burt (Garret Dillahunt) are prone to accidents, and great-grandmother Maw Maw (guest star Cloris Leachman) is completely kooky.

"When I read it, I just loved it. It was hilarious. It actually made me laugh and I thought, ‘Well, this never happens, ever, so I better get on this,' Plimpton says.

Garcia and the show's writers, he says, "are just trying to think of some absurd situations we can get the baby in. I guess those things stick out to people because I can't think of -- I know in the pilot we flipped the baby in the car seat, which came from an idea I had. I wanted to put that in the show a long time ago because I think one time -- more than one time, I think -- I've probably put the car seat in the car and then driven somewhere and realized that it wasn't strapped in and thought, ‘Well, this could have been awful,' or it could have been hilarious if it just flipped one time and the baby was fine. Then stuff like getting the baby stuck in the garage with the clutter and all that stuff that just came from an idea that Martha was a hoarder and then we just went from there. We've just been trying to find some fun situations for the baby."

"Raising Hope" is genuinely, unexpectedly funny. And in no small part, that's because of the cast, which is chalk full of lead actors not especially known for their comedic chops.

"I think everybody just feels real," Garcia says. "That's just a credit to them as actors. Nobody really has to push real hard. ... Everybody can just be natural and get the laughs off subtle, smaller things. I got lucky. I got really lucky. It's funny, too, because I hear Martha mention that we spoke on the phone and then she comes and she goes through the auditions process. To me, pretty much with everybody on this thing, the audition process was such just an exercise in keeping the studio and network involved, but I knew I wanted Martha to play this role. As soon as I saw Garret do it I knew he was the guy, and the same with Lucas. I just got incredibly lucky that I have all the people that would be best for these roles playing these roles. But I think for me it does come down to, that at the end of the day, that everybody just feels like these characters. You don't see anybody on screen trying; they're just doing it great."

Plimpton says, "The thing I'm enjoying the most is working with these really awesome actors on this really funny, smart material. That's the most exciting part for me that we have an opportunity to work together, people who obviously, clearly like each other. We have really good chemistry together as a company of actors. Then, we get this awesome material that's hilarious. When we get together every week to read through it we just crack up. It's not just that it's funny. It feels very well rooted in who these people are. They feel like people, actual people. That's really great."

The actress, perhaps best known for her role in "Goonies," is particularly fond of Dillahunt. She's rather pleased audiences are seeing a different side of the actor who played a terminator in "The Sarah Connor Chronicles" and a serial killer on "Burn Notice."

"Garret and I have known each other, or known about each other, for many years," Plimpton says. "I've wanted to work with him a lot of times before, but the opportunity just never presented itself. We have a lot of mutual friends and I've always admired him. He's one of the best there is, honestly. I think he's one of the best actors we've got. It's an entirely pleasurable experience working with him because, as Greg said, Garret is the -- he's the perfect example of the understated choice. Everything he does just kind of sneaks up on you.

"It's all about behavior with him, which I love, because it gives you something to work with. You're working with a character instead of just a situation. That's really great. When I'm working with Garret, I feel like I'm getting better at my job, so that's great. He's also just a hilarious person. You'd never know from the more visible things he's done that have been evil and horrible -- like murderers -- you'd never know that he is truly and honestly one of the funniest people around. He's hilarious."

"Raising Hope" airs Tuesdays at 9 p.m. on Fox.
Categories
Behind the Screens Entertainment