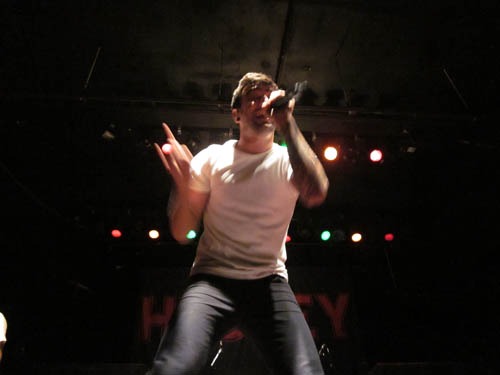 The audience clapped along to seven songs by the opening band, Colors in the Air, which is an indie/rock/alternative band from Buffalo. The audience strongly applauded and liked the music, but was very anxious to see what they really came for.

Hedley kicked off the show with "Cha-Ching," an upbeat song from their newest album "The Show Must Go," which made the audience come alive.

As soon as frontman Jacob Hoggard ran onto the stage, the high pitch of teenage girl's love-crazed voices echoed throughout the vicinity.

With his exaggerated facial expressions and sharp, intense gestures, Hoggard had the audience mesmerized the entire show.

When he'd clap, they'd clap louder. At times he would simply hold the mic out to the crowd and audience members recited the words loud and clear.

The other band members took a back seat while Hoggard ran and danced about the stage.

Guitarist Dave Rosin and base guitarist Tommy Mac were on either end of the stage, while drummer Chris Crippin played on the back part of the stage on an elevated platform.

Both Rosin and Mac occasionally ventured near the front of the stage, which was very appreciated by those in the audience who screamed at the very sight of them coming closer.

A big red and black display of the band's name was the backdrop for the performance.

Throughout the show, Hoggard interacted with the audience by saying phrases like, "Shake you booty for me!" and "You look so beautiful tonight Buffalo."

The song "Friends," from "The Show Must Go" CD was more relaxed and easy-going. The audience swayed along with the tune.

"Hands Up" made the audience members literally put their hands up and clap to emphasize the already strong drumbeat in the song.

Even those who lined the outer balcony were clapping.

The loud screams between songs made it obvious that Hedley was a favorite for many of those in the audience.

Toward the end of the show, Hoggard played piano for the song "Amazing." The stage was dark, accept for the spotlight that fell directly on him.

The song slowed the pace of the concert down, which was a total transition from the songs Hedley played earlier in the show.

Hedley finished with "Sweater Song," which was a softer, acoustic piece with a built-up ending. All the band members seemed to mesh together very well and the sound of their instruments collided to make a memorable finish.

There was no encore, but fans rushed out to the merchandise table to meet the band. The line filled the entire entrance way. It seemed like everyone wanted to get a piece of Hedley.

Teenage girls, mostly between the ages of 14 and 17, handed over anything they could, including posters, shirts and even shoes.

The meet-and-greet lasted a little more than an hour, yet there were still lingering fans who wanted more. Finally security stepped in and that was the end of it.

Overall, it was a very dynamic concert. The diverse range of music, hyperactive dancing and amusing one-liners made for an entertaining show to say the least.