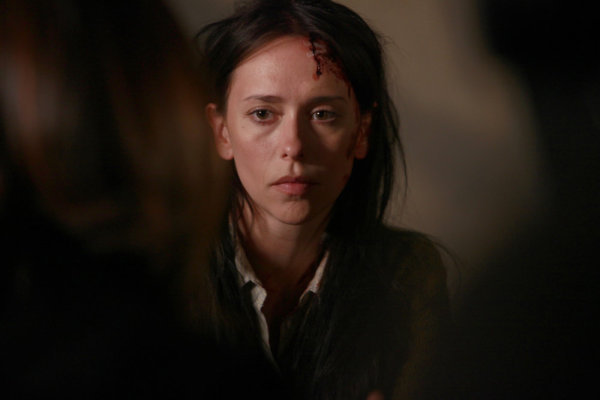 Pictured from the "Law & Order: SVU" episode "Behave" is Jennifer Love Hewitt as Vicki. (photo by Will Hart/NBC)

The 31-year-old actress and star of "Party of Five," "I Know What You Did Last Summer" and "Ghost Whisperer" recently realized she had outgrown the girl-next-door roles that dominated her early career. She was ready move on to more mature film work.

"I think I just kind of became a grownup -- I mean in life," she told BTS. "So I think that, because I've just sort of become a grownup, I kind of inside have just sort of gone, ‘OK, now I'm actually ready to do it.' You know, and really do things that not only nurture my craft, but nurture me as a human being."

To wit, Hewitt recently starred in "The Client List" for Lifetime. Based on a true story, she played beauty queen and physical therapist Samantha Horton, a Texas woman who joins a prostitution ring after her family falls on difficult economic times. Not thrilled with her newfound occupation - but struggling to provide for her family - Horton ultimately agrees to aid the police in apprehending big-time johns.

The actress goes one step further this week, taking on her most challenging role ever. Hewitt plays Vicki, a rape victim, on Wednesday's episode of "Law & Order: Special Victims Unit." The character, brutally traumatized, is afraid to leave her home -- let alone confront her attacker. This poses a significant challenge for NYPD detectives Benson (Mariska Hargitay) and Stabler (Christopher Meloni).

"I mean, really, the ultimate dream in life is to be able to do what you love and learn something from it," Hewitt said. "And to be able to do something that you love in the business and then have it actually affect human life. And that, you know, that's what I feel like I'm getting to do now, which is extraordinary."

In the past, Hewitt "relied on (hair and makeup) more than I would like to admit and more than I was comfortable with," she said. Her appearance on "SVU" is in sharp contrast to the pinup girl she's become over the years.

"And so being able to have the gift, you know, that (exec producer) Neal (Baer) and everyone gave me of being able to really, not just strip down emotionally, but strip completely down -- look-wise, wardrobe-wise, hair-wise, makeup-wise, all of that stuff -- take everything off and be something that I've never been before, really allowed me I think emotionally and physically and mentally to go to a different place.

"And so there was no preparation. I wouldn't have known how to do that. It just happened. We just got there the first day and I went, ‘OK, I have one job to do and that is to give everything I've got.' And out of that, hopefully, people will know how important the issue is. People will feel the depth of what I think this girl feels and goes through and hopefully it'll work. And I think ultimately it did."

In other words, if wrapping her brain around physical appearance was daunting for Hewitt, it paled in comparison to getting into the mindset of a rape victim.

"I couldn't imagine what it would take to play this character," she said. "I really -- there was no preparation. ... I think I was afraid to wrap my head around it, to be bluntly honest with you. It's a scary place to go. I'm not usually an actor that does that. I usually, you know, play characters who are nice, sweet, fun girls, you know whatever, women.

"I mean it was definitely scary. I was like -- and I think I saw before I got there that I was going to be able to have a lot more control over my emotions while doing it than I did ultimately when I got there.

"And the reason that I credit the cast and the crew and Mariska, specifically, and (director) Helen (Shaver) is because, you know, they really pushed me. I mean they really said, ‘Great, so everything the people know you for and everything that you usually give is awesome. But it's not going to work here. And you're going to have to go deeper.'

"And you know, I think I learned a really important lesson as an actress: that hair and makeup is great. But the lack of it is better."

Hewitt's "SVU" episode tackles the issue of rape kits. Vicki is asked to submit to one in order to produce physical evidence against her attacker. In the process, Detective Benson is horrified to find a massive backlog of rape kits.

A rape kit is a highly invasive test used to garner DNA samples. Currently, there are hundreds of thousands of untested rape kits sitting in crime labs across the country.

Hargitay's advocacy group, the Joyful Heart Foundation, is launching the website www.endthebacklog.org on Sept. 29 in an attempt to call more attention to this rape kit predicament.

Sarah Tofte, the director of advocacy and strategic partnerships for Joyful Heart, said, "It's really important that a survivor come forward and reports their rape to the police. It puts a record there of the perpetrator's actions and it gives the survivor a chance for justice.

"At the same time, this is what makes this rape kit backlog so difficult to comprehend, is that when a victim goes to a rape kit exam, it's a four-to-six-hour process. They do everything that the police are asking of them through this process. And it's the least we can do to test those kits in the hope that the information from those kits will help them find some justice in the situation."

Working on set with Hargitay and members of the Joyful Heart Foundation, Hewitt said she learned a great deal about rape kits.

"I think I will speak for a lot of people when I say that I think the assumption is that rape is the crime. And what I learned when doing the episode is that there's actually a bigger crime that takes place afterwards, which is when these women are put through these horrible rape kit examinations after having been raped and violated so, you know, horribly in their life," she said. "And then they're put through these tests, and then nothing ever becomes of them. And the rape kit test is then put on a shelf. And they live in fear for years of their lives afterwards, having no idea if this person has been caught; if he's out there; if he's watching them.

Hewitt was moved by this experience, and said she wouldn't hesitate to speak out for rape victims and against the rape kit backlog.

"Absolutely. Oh, I would do anything for this cause in the future - absolutely," she said. "I mean, I think it's a -- you know, as a woman it was -- it's very difficult. It's hard to know that there are -- I mean, I imagine how I felt. You know, quite honestly, when we shot the rape kit scene, that was a 15-hour day. And it was that scene all day.

"I mean, I really had to stand there, they really were taking pictures of me all day. There really was people on me and in my face. And I really was telling this horrible story.

"And I thought to myself, ‘Gosh, like I am in the glorified version of what these women have to go through, who are so incredibly violated and taken advantage of in these sheer, horrific moments of life that should not happen to anyone.' And I couldn't imagine having to feel it for real. Like it was unbearable. And so I think it, just as a person, it just taught me so much. So, this cause is beyond important."

Though her "SVU" role was physically and emotionally draining, Hewitt is pleased it's taken her craft to a new level.

"On an actress level, I learned that I have been having a lot of fun and doing really good things in my career. But I hope that the world and the universe will give me more of these moments to play with and to revel in. Because it's -- when you get to do something like this it's really -- it's where it all starts," she said. "I feel like I started acting my eight days on the show. Now I would like to continue so."