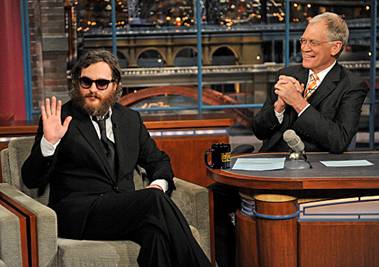 This will mark Phoenix's first television appearance and first visit back to the "Late Show" since his "memorable" appearance on Feb. 11, 2009, which subsequently garnered a whopping 8 million views online at the "Late Show" website on CBS.com and YouTube.

In anticipation of his visit to the show, the "Late Show" will rebroadcast his previous appearance on Thursday, Sept. 16, on CBS.

Phoenix is the subject of the documentary film, "I'm Still Here," directed by actor Casey Affleck. The film, which also marks Affleck's directorial debut, follows a tumultuous year in the life of Phoenix as he announces his retirement from his successful film career in fall 2008 and sets off to reinvent himself as a hip hop musician. "I'm Still Here," which was released by Magnolia Pictures, opened in theaters Friday, Sept. 10.

Also featured on the "Late Show" Sept. 22 is a performance by legendary singer Tom Jones.