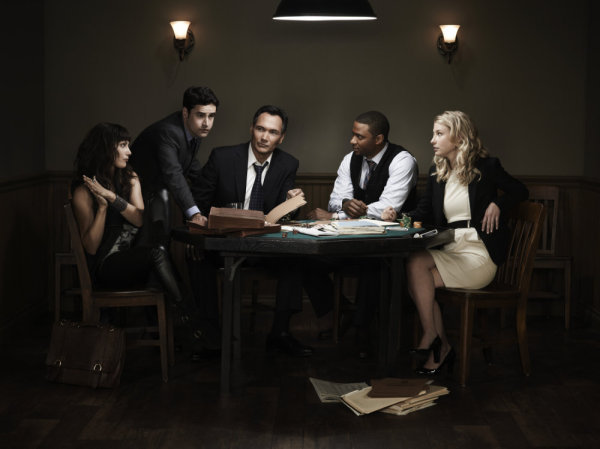 If you're a dedicated television viewer, two thoughts will likely come to mind upon first glance at "Outlaw," NBC's new Friday night drama: It's yet another court procedural ... and it's just like CBS' short-lived "Shark." In fact, it couldn't be more "Shark" if James Woods was the star, and not Jimmy Smits.

In "Outlaw," as in "Shark," a morally questionable legal eagle has a conflict of conscience and re-discovers a passion for justice. Paired with a rag-tag team of freedom fighters -- equal parts book smart and streetwise -- said lawyer fights to right the legal system.

It's not the most original idea -- but that's not necessarily a bad thing. For the past three seasons, NBC has sought to reinvent the wheel. In the process, the Peacock Network has gained little to no ground on first place CBS, which nowadays stands for "Crime Busting Series." When it comes to primetime drama, CBS is all about cops, crooks, courts and protecting the innocent.

That formula has proven successful because, as "Outlaw" creator and Executive Producer John Eisendrath says, TV viewers enjoy watching an idealized version of the legal system.

"I think most people, myself included, hate lawyers. And yet I think that what -- the reason that they are such great characters in drama is that people believe in the system that they operate in," he says. "They believe that the system is one that allows for them to represent, for instance, a triple murderer, because a triple murderer deserves justice, deserves a representation, so that your hero can represent good and bad people but still act in a heroic way."

So why shouldn't NBC give the CBS formula a go? Or, perhaps "roll the dice" would be more apt? After all, Supreme Court Justice Cyrus Garza (Smits) enjoys gambling. He enjoys women, too. But, in the pilot episode (Wednesday, Sept. 15, 10 p.m.), when a woman who idolized his activist father calls him out, Cyrus remembers his first true love is due process.

He steps down from the high court because he believes he can do more good as a fighter than he could as a referee. Cyrus makes it his mission to use the law for what it was designed for, and to rise above the legal semantics that would oppress the wrongfully accused.

"People don't particularly like lawyers, but God knows they want a good one if they ever get in trouble. And I think in this case, that's sort of what is at the core of the show: The best possible lawyer in the system trying to make the system more just, to try and -- that's why he left the court, because it didn't really -- the system didn't really serve justice. And so he left to try and bend it more toward that," Eisendrath says.

Ultimately, if you enjoy legal procedurals,  "Outlaw" is definitely for you.

"I think in the large scheme of things, people, in this case the audience members, really want to believe that the system can work and there are people that can be representative when something goes awry," Smits says. "And I think that that's why the characters have been through the, you know, well, we're talking about television right now, but throughout TV's history, there's always been these kind of lawyer shows and lawyer characters that will help people, put bad people away, you know, wherever, whether they be defendants or prosecutors.

"And I think it kind of, you know, it firms peoples' beliefs in the idealism of how the system could possibly work."

As for the similarities with "Shark," "Outlaw" has two points in its favor. First, Smits, traditionally, plays more noble and heroic characters (think "The West Wing," "NYPD Blue," "L.A. Law"). That makes Cyrus much more palatable than Woods' Sebastian Stark. So too, Cyrus isn't just any old attorney at law -- he's a former Supreme Court justice. That firmly sets him apart from every other lawyer on TV.

"This character, you know, it's not about being the sitting judge. It's more about him feeling that the system in a lot of ways is at loggerheads, is jammed, and he wants -- because of what's going on in his personal life as well, (he) takes a kind of -- he veers and wants to pursue justice in a different kind of a way," Smits says.

"In this show, I think a lot of times shows and characters who play lawyers on shows do rationalize their job (because) the system requires it," Eisendrath adds. "I think what is special about this show is that we have a character who's saying, ‘Well, the system doesn't really work like it should, and I am going to try and make it work better.' "

Eisendrath, incidentally, wrote and produced episodes of "Alias," far and away the most original and creative action drama on television over the past 10 years. He was also behind "My Own Worst Enemy," a ratings-challenged but highly stylish and intriguing spin on spies. His track record of inventiveness bodes well for "Outlaw" - and, hopefully, will result in the show distancing itself from its CBS counterpart.

"Outlaw" premieres Wednesday and then moves to its regular timeslot on Friday, Sept. 17, at 10 p.m. on NBC.