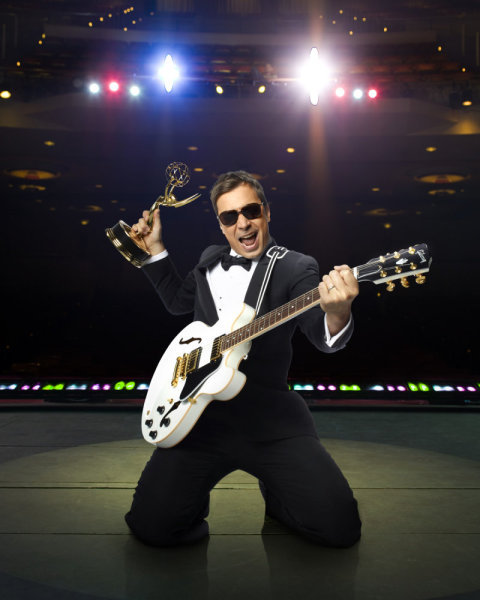 On a night dedicated to the best and brightest on television -- the creators and innovators that guide our channel surfing -- Jimmy Fallon has decided to bust out a rerun.

"We're going to do something different this year at this Emmy's that no one's ever done," the awards show host says. "We're going to do the exact same show that Neil Patrick Harris did last year -- word for word.

"And we come out and do his opening. We're going to give up the same awards, just acted by different actors."

In all seriousness, the emcee of Sunday's 62nd annual Emmy Awards ceremony says he has no shortage of new ideas for this year's program.

"As soon as they asked me to host, I was honored and I got, you know, immediately like probably 200 ideas of what I should do," he says. "And I wrote out, like, probably 100 of them. And then I gave (them) to the producer and he was like, ‘These are all great, but we do actually have to give out awards during the show. And so we have to whittle this down.'

"So we picked the best of what we had. And I think it's good."

Fallon admits a lot of the shows nominated this year for an Emmy are pretty good, too. He stops short of admitting who he's pulling for -- though he is rooting for "Saturday Night Live."

"I think that show's underrated. I think it's -- the fact they're doing a live show, you know, that they put together in a week and just do a live show every -- with all the costumes, changes and all that stuff during commercial breaks, it's just -- it's a fascinating show. I mean, gosh, I learned so much on that show, so I do love that."

Since leaving "SNL" in 2004, Fallon has successfully transitioned into a permanent host -- of NBC's "Late Night with Jimmy Fallon" program. The post-"Tonight Show" weeknight laugher has already won a pair of Emmys for digital excellence, and Fallon has earned commercial success for his blend of skits, songs, interviews and special projects (such as parodies of "Lost" and "Glee," and attempting to reunite the full cast of "Saved By the Bell").

"It's exciting," he says. "I mean we, you know, we went in, you know, when we went into the show it was like we were just following a guy who's been in your TV set for 16 years (Fallon replaced Conan O'Brien). It's not an easy thing to follow.

"I mean the fact that we won Emmys, it doesn't make any sense to me. It's like this is all happening so fast. And it's -- I mean, we worked so hard, so it is, you know, I feel like we deserve it. But we're just so -- we're really still babies.

"I mean I've only been on a year-and-a-half, so we're still like excited and laughing going, like, ‘This is amazing.'

"And then the Emmy opportunity came up, and I'm like, ‘This is off the charts.' What a crazy year this has been, or a year-and-a-half.

"But yes, I can't be happier with the way everything's turning out as far as our show. I really don't pay that much attention to the ratings, but I'm told by other people that our ratings are -- they've been pretty good. We've been doing well, especially in the past couple of months. So that's always good.

"And when you win an Emmy or any of that stuff, or get recognized, it's a good morale for the office.

"Like when you guys write something about our show or put a joke that we wrote in the monologue in your papers, it means the world to us because it gets back to us.

"And if something's on a blog or a website and people say, like, ‘Hey this was a funny bit on the show, I like it,' office morale goes through the roof.

"So it really affects our confidence level and affects our show and makes our show better the -- you know, when we get good reviews or accolades."

Though Sunday's telecast is an awards show, Fallon sees the Emmys as more of a big reunion than anything else. In fact, it's like friends with benefits.

"And I -- just the fact that they all came out of want to present and do a fun bit on the show just helps me out and makes my job a little bit easier."