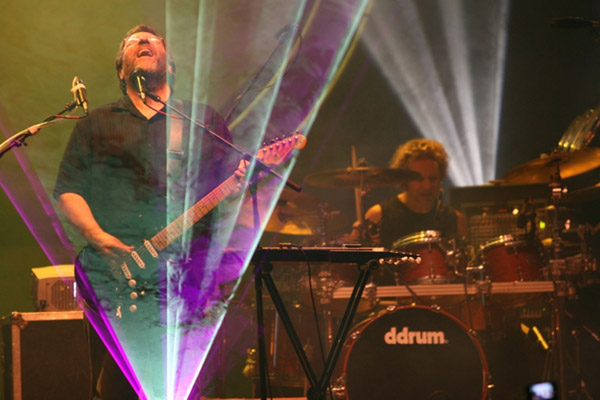 The Machine (photo by Lou Teazak)

'Hey You': Artpark ends summer season with The Machine

All in all, The Machine is not just another brick in the wall -- or just another cover act trying to put some different spin on the music of Pink Floyd. Rather, The Machine is a faithful representation (down to the spacey on-stage videos and sky-high laser lights), internationally known and critically acclaimed.

To wit, Rolling Stone once said, "The Machine duplicates the sound and hits of Pink Floyd with chilling accuracy."

Interestingly enough, though, that wasn't exactly what the Rockland County-based band had in mind when it formed 20 years ago.

"It wasn't a conscious decision to be a Pink Floyd band," lead singer and guitarist Joe Pascarell says. "That never happened. We didn't sit around one day going, ‘Hey, let's have a tribute band. And let's play all of some band's music.' That never happened.

"The band started because me and the drummer (Tahrah Cohen) wanted to have a band where the primary goal was to play music that we loved."

Songs varied and included cuts from a number of acts -- including some from Roger Waters, Rick Wright, Nick Mason, Dave Gilmour and Syd Barrett.

"We liked Floyd, so we played a lot of Floyd," Pascarell says. "We played other music, too, but we were playing a lot of Pink Floyd.

"People freaked out. Like, ‘Wow, you don't hear a band do that, and you guys do it so well. So, we learned some more. We learned a little more, and an agent saw our band and said, ‘You know, if you guys did more Floyd I could get you a gig like as a Pink Floyd band.' I'm like, ‘Wow, that'd be cool.' And three months later, we were quitting our jobs and had enough gigs to support ourselves. And that was 1989."

Pascarell says, "There wasn't a plethora of Pink Floyd bands" back then. And among the bands that did pay tribute to the "Dark Side of the Moon," few went so far as to match Pink Floyd's musicality with its theatricality.

"From the very, very beginning, it was really important for us," Pascarell says. "I remember, in the first handful of shows we ever did, the money we got paid we put it back into the production, because ... that was something Pink Floyd was known for. Part of the Pink Floyd thing was a high-quality live show -- that's really good sound, lights. You know, they were multimedia before even that word existed. They always presented that.

"So, we felt like we wanted to do that, too. And I think, as we become more successful, we just put more thought into presenting that, too. Not just standing there and playing the songs, but presenting that whole thing that encompasses what people think of when they think of Pink Floyd."

The Machine returns to Artpark to headline the final "Tuesday in the Park" concert of the 2010 season on Aug. 31 (7 p.m. start). The performance features the band's patented "Interstellar Multimedia & Light Show."

"What sticks out in that place was just the energy," he says of the band's 2009 show. "Because usually, you know, if you're outside, the energy dissipates a little bit, because people maybe aren't focused on the band or there's other things to do. I just remember being overwhelmed by the energy there. It was just fantastic. And the sheer amounts -- I mean, you can't fit 10,000 people in a place. Outside you can have a lot more people and have that energy.

"And the setting was beautiful. We love that show. I have to say that. (Over) 20 years, that was one of the Top 10 moments; that last year's show was great."

Pascarell says the mark of a successful performance is, "The show's over and I felt like no time went by," he said. "There's a certain timeless feeling when, if you're really, 100 percent inside of what you're doing, there's this timelessness. ... You sort of reach this little Zen moment where time doesn't seem to be going by. I feel like the band could play for 10 hours. We have limitless energy and it just flows.

"That's what happened to us there last year. And that's what I look for to have a memorable show."