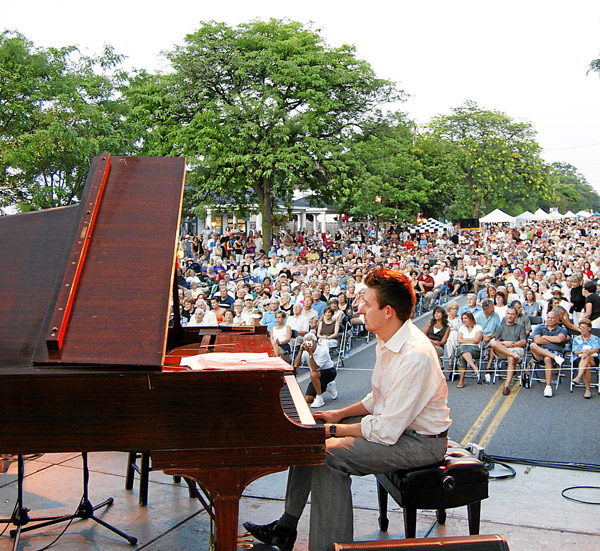 Crowds in the tens of thousands are again expected to fill Center Street for the Historic Lewiston Jazz Festival, Aug. 27 and 28 in the Village of Lewiston.

Historic Lewiston Jazz Festival back and swingin' for ninth year

The Village of Lewiston will once again appeal to all of the senses, with sounds of cool jazz, the sights of hot classic cars, and the aromas of culinary delights filling the streets, as the ninth annual Historic Lewiston Jazz Festival welcomes residents and visitors alike on Friday and Saturday, Aug. 27 and 28.

"The Historic Lewiston Jazz Festival has grown each and every year with a unique blend of national and local musicians to become an end-of-summer favorite for both residents and visitors from Western New York, Southern Ontario and other regions," says Carol Calato, president of Calato Manufacturing and chair of the Lewiston Jazz Festival Inc. board of directors. "This event has put the Village of Lewiston on the map for quality jazz entertainment."

It will feature more than 170 musicians and 40 performances throughout the weekend, all of which are free of charge to visitors. There will be entertainment in numerous restaurants and pubs throughout the Village of Lewiston, as well as a variety of indoor and outdoor sites along Center Street on Friday, from 5 to 10 p.m., and from noon to 10 p.m. Saturday.

On Sunday, select Lewiston restaurants will offer entertainment as part of a Jazz Crawl, and there also will be outdoor performances on Sunday at Academy Park in Lewiston.

The Friday evening headliner will be the West Point Band's Jazz Knights from West Point. Bringing more than three decades of musical excellence to their audiences, the West Point Band's Jazz Knights will present the best in Big Band favorites, popular music, original compositions and arrangements for jazz ensemble. Members of the group are graduates of some of America's most prestigious music schools and have been recruited and selected through a competitive audition process specifically for service in the United States Military Academy Band at West Point.

Saturday evening's headliner is Curtis Stigers, BBC Radio 2 Jazz Artist of the Year, and a 2009 Emmy Award nominee. He will take the Main Stage at 8 p.m.

Stigers, standing at the forefront of a new generation of jazz singers, has toured in concert with such renowned pop artists as Elton John, Eric Clapton, Bonnie Raitt and Prince. He has also shared the bill with such jazz greats as Nancy Wilson, Diana Krall, Randy Brecker and Toots Theilmans.

According to Jazz Times, "If voices, like wines, had noses, Curtis Stigers would be dusky oak with hints of Willie Nelson, Harry Nilsson, Ray Charles and Matt Dennis. It's a voice that's at once young and old, tender and tough, warm and inviting as a caress, yet sturdy as a firm handshake."

In addition to music, area chefs will leave their kitchens for Center Street, showcasing their culinary talents with great food offered for purchase to festival guests. Regional wines from the Niagara County Wine Trail will also be available. In addition, festival guests can shop under the big tent and purchase vintage and contemporary jewelry at the Jewelry and All That Jazz show.

The festival's classic car show, coordinated by Jag Buffalo, is an invitation-only event and will feature vintage British cars, European collector cars and vehicles of special interest for all to view.

A complete schedule of performances and activities can be found by visiting LewistonJazz.com.