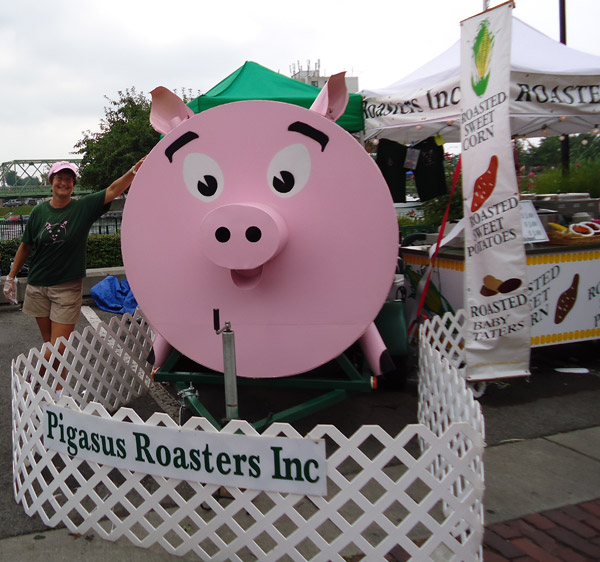 Diane Rothberg shows off "Piggy," the convection oven that Baldwin built from scratch.

A weekend of smokin' fun at Smokin' Eagles BBQ festival

The event included a barbecuing competition amongst the best-of-the-best locally and nationally. Barbecuers from as far as Illinois and Virginia joined the weekend of fun to participate in the competition. The winner of the open competition not only received recognition as the best local barbecuer, but also received an opportunity to compete nationally in Georgia for a chance to win $60,000 and the title of "Best of the Best."

The winner of Saturday's open competition is Pete Millspaugh of Blasdell from Big Belly's Barbecue in Hamburg. Millspaugh was also featured in "Taste of Hamburg" this year.

"He really made some delicious barbecue and worked hard," said Roy "Honcho" Gregory of Wheatfield, chairman of Smokin' Eagles. "I hope he does well when he competes nationally."

The vendors created a delicious variety for everyone to enjoy. A few specials included moioink balls that are made from cow and pig, atomic buffalo turd, and pulled pork.

Even though the weekend was a barbecue festival, vendors included other choices for guests. Specialty Pies by Shirlene, from Wheatfield, and Pigasus Roasters Inc., from Lewiston, were among them.

Shirlene Hicks-Mullen, owner of Specialty Pies by Shirlene, was excited to be a part of the fun-filled weekend. "I love being part of the festival. Everyone here is so complimentary of my pies," she said. Some of her one-of-a-kind sweet potato pies are original, coconut and cream, buffalo snowball and nuts over caramel, which has won a national award. For more information on Specialty Pies by Shirlene or to place orders, visit yourpielady.com.

Pigasus Roasters Inc. is a home business run by Diane Rothberg and Tom Baldwin. Their specialties are roasted corn, roasted sweet potatoes, and roasted baby potatoes. The vegetables are picked fresh from local farms and the sweet potatoes are dipped in butter and brown sugar. Rothberg was proud to show off "Piggy," which is the massive, well-decorated convection oven that Baldwin built by hand. They have been retired for six years, but enjoy bringing their creativity to festivals.

Aside from the open competition Saturday, another highlight was the grilling demonstration. Rocky Danner, an international griller from Ireland, put on a great show, reports Gregory. "I was honored when Danner invited me to grill with him in Switzerland. I'm looking forward to it." He also stated the demonstration taught how to cook with charcoal. "The charcoal is made of oak and hickory; it's the best you can buy," said Gregory.

Gregory and his co-chairman, Robert Giordano, president of Barbecue Shop Inc. of Lewiston shared the common excitement of the weekend together.

"It was a great turnout," said Giordano, "we literally had to run to the store to buy more food." Added Gregory, "People bent over backwards to help make this a success. It was a crowded and successful weekend."