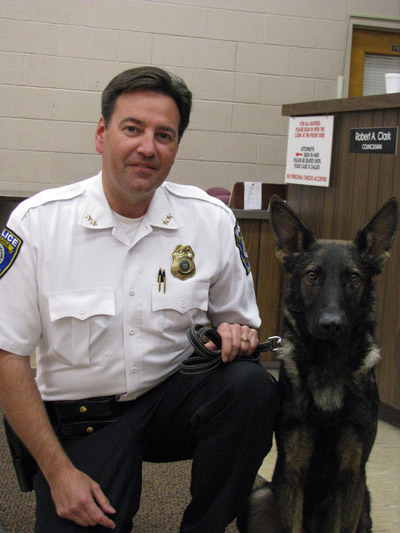 The Town of Niagara has a new employee, who come November is expected to be sniffing out drugs as a member of the police department.

Cody von Schlosser, a pedigreed German shepherd, was introduced to the Town Board on Tuesday night by Police Chief H. James Suitor.

Suitor changed Cody's last name to Schlosser in honor of the town's original name of Fort Schlosser. The lanky shepherd, who will turn 1 year old on Aug. 21, is still growing into the name. Tired out from a day of training, he seemed unimpressed by his board appearance, but was willing to lap a friendly tongue over the hand of those brave enough to approach the already big dog.

Suitor learned that Cody was available from a breeder in Pennsylvania, near Pittsburgh, after another law enforcement agency decided not to add a canine to their force. He purchased the dog, and with the agreement of Supervisor Steve Richards, donated Cody's services to the town as a test of the feasibility of creating a canine program. In turn, the Town Board agreed Tuesday to pay for Cody's training, which should be about $3,000.

Suitor and Richards had discussed the benefits of asset forfeiture (usually large sums of money or narcotics) for the town, before Suitor went ahead with the purchase. Drugs and crime always have been a societal problem, but incidences have been increasing, probably due to the poor economy, Suitor said.

It was decided to train Cody to sniff out drugs.

Cody won't be a patrol dog. His primary use will be narcotic detection. He's being trained to alert his handler by barking and then scratching at wherever he perceives the scent of the narcotics to be, whether it's a package or even a motor vehicle.

Cody has been living with Suitor's family since he was 5 months old.

However, Cody now has been in training for four weeks.

"He's progressing extremely well, and it is our hope that at the current rate of training, he'll receive his narcotic detection certification by mid-November," Suitor said.

Cody goes for special training twice a week and gets daily training from Suitor.

Cody will continue to live with Suitor and his wife and two young daughters. He's Suitor's third shepherd.

Once certified, Cody will be brought to events and group settings to display his talents and meet local residents.