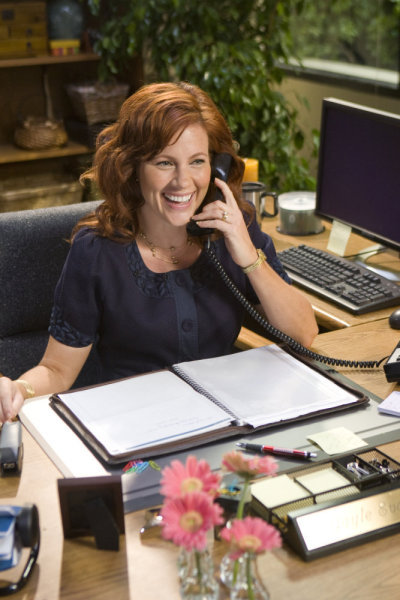 Elisa Donovan is Gayle Evans on "In Gayle We Trust." (NBC photo by Paul Drinkwater)

'In Gayle' audiences have found a new way to watch television

What if we didn't need a television to watch television?

With the rise of sites such as Hulu.com and TV.com, more and more viewers are turning to their computers and smart phones to catch the latest episodes of their favorite series. To that end, networks are devoting more time and resources to developing Web-specific content.

NBC Universal Digital Studio's "In Gayle We Trust" was recently picked up for a second season -- marking the first time a production company has renewed a Web series. The show, which stars Elisa Donovan as an insurance agent-turned-Tony Robbins in the offbeat, apple pie town of Maple Grove, runs without commercial interruption. A sole sponsor underwrites each four-minute episode.

"The strong results garnered from season one and the pickup of season two marks a vital next step in the development of original digital content as an integral part of the media mix," said Cameron Death, NBC Universal Digital Studio senior vice president and general manager. "It represents a significant accomplishment as we continue to create quality and original digital entertainment with brand-name association such the one we have with our partner, American Family Insurance, which also returns as the exclusive sponsor of this appealing series."

For Donovan, the series represented a chance to try something different. Above and beyond that, however, she was impressed with the show's writing.

"Certainly for me, everything always starts with the script itself," she told BTS. "And, I read the scripts and they were hilarious and so well crafted, and created by Brent Forrester, so I knew already that he has such a great career behind him and is a brilliant guy. And knowing that there's a network behind it -- all of those things already just made me say ‘yes.' "

The actress jumped at the opportunity to play Gayle.

"You know, it's really rare," she said. "I've said this so many times about this character. It's so rare as an actor that you read something and you immediately just say, ‘Oh, I know exactly who this person is. I know exactly what I should do for this.' And a part of the audition process was improving. And because I had such a clear idea of who I thought Gayle was, it was really easy for me.

"And, we would all would like to believe we can play any part, and I think that's true to a certain extent. But, there are certainly things that speak to you a little bit more. So, it felt like a great fit from the beginning."

Like Gayle, Donovan is a do-gooder, active in many community and social causes. It's because of that that she, like her character, has become the person everyone goes to for advice.

"I'm very flattered by that," Donovan said. "And as soon as I get a little too flattered by that, I realize that I don't know very much at all, and I'll usually put my foot in my mouth or something. So, I tried to -- I think that I am inherently a person that is curious about human nature and that generally likes people and likes to be around people. So, I think that is a part of it. And so, I probably am that person. Yes."

New episodes of "In Gayle We Trust" debut Tuesdays and Thursdays online at http://www.nbc.com/in-gayle-we-trust/.