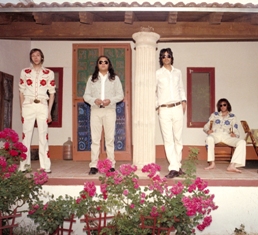 The Sadies stop at Artpark

The Sadies will make a stop at Artpark on Aug. 4 to headline the venue's "Coors Light Wednesdays" concert series at 6:30 p.m. The Toronto foursome have managed to combine '60s country rock, psychedelia, folk and punk into a unique sound that is all their own.

The Sadies band was created by Dallas Good, Travis Good, Sean Dean and Mike Belitsky. Dallas and Travis Good are the sons of Bruce Good, who is a member of the Canadian country group The Good Brothers. In addition to their own recordings, the Sadies often collaborate with other country-rock artists, such as Blue Rodeo, Jon Langford, The Tragically Hip, The Deep Dark Woods, Andre Williams and are the preferred live backing band of singer Neko Case. On May 18, The Sadies released its "Darker Circles" CD/LP through Outside Music and Yep Roc Records. The members of the Sadies have also participated with Greg Keelor and Rick White in the supergroup The Unintended.

For the Wednesday concert event, Artpark will salute the 220th anniversary of the U.S. Coast Guard with a presentation of colors by the Coast Guard Station Niagara Color Guard at 6:30 p.m., accompanied by the National Anthem. Coast Guard Station Niagara, built in 1893, currently has 24 active duty and five reserve members and is supported by Auxiliary flotilla 3-1.  This station is responsible for the Lower Niagara River, 30 nautical miles along Lake Ontario to Thirty Mile Point, and to Port Weller Canada (approximately 560 square nautical miles). VIP personnel from the WNY Coast Guard will attend.

Artpark's Outdoor Amphitheater opens to the public at 4 p.m. on event nights, and can be accessed via the upper park's Portage Road entrance off of Center Street or through South Fourth Street nearest the Mainstage Theater.  Carry-ins (food and beverages) are prohibited at all of Artpark's free concert events. On-site parking is available for $10.
Categories
Entertainment On Stage