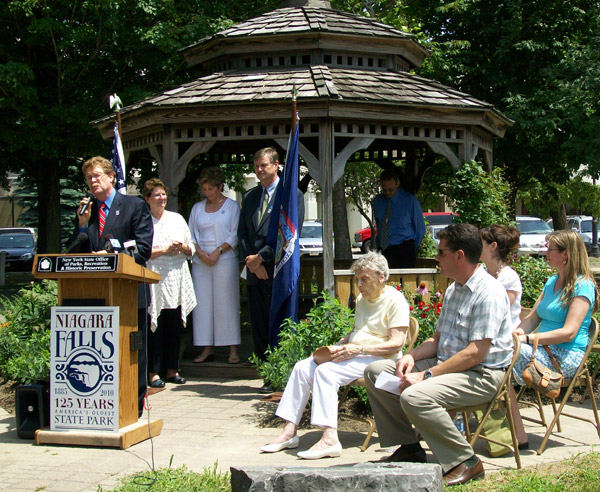 Story and photos by Danielle Forsyth

The nation's oldest state park, Niagara Falls State Park, celebrated its 125th anniversary on July 15, with a dedication of a refurbished pocket park to Thomas V. Welch as well as a concert by the Buffalo Philharmonic Orchestra in the Meadow on Goat Island.

Commissioner Carol Ash of the New York State Office of Parks, Recreation and Historic Preservation praised the park as a worldwide destination.

"For generations, people have come from all over the world not just to visit this incredible park, but to experience it. The breathtaking views, the thunderous crash of the falls, and the drenching mists of the gorge make this place like no other in the world."

Members from the Welch family were present, as well as other distinguished guests, to honor the work and commitment of Thomas V. Welch to the City of Niagara Falls. The afternoon dedication ceremony took place at the gazebo across from the Red Coach Inn at Heritage Park, the newly renovated pocket park just outside the State Park. It serves as a connection for visitors between the city and the park.

Thomas V. Welch (1850-1903) was a New York state assemblyman and served as the first superintendent of the New York State Park at Niagara Falls, holding the post for 18 years. As a member of the Assembly, Welch was a key player in the efforts to acquire the lands adjoining Niagara Falls, and to make them free for all to view.

Niagara Falls Mayor Paul Dyster said it was important to pay tribute to Welch and members of his family, who always believed in the "big project and big dream."

Assemblywoman Francine DelMonte and State Sen. Antoine Thompson, both present at the dedication, stressed the importance of state parks.

"We have fought under tough financial times to keep our parks open. This park set the standard for all other state parks to come because it was the first. We need to remember that they are just as important today as they were in the past," said DelMonte.

The celebration continued with a performance by the Buffalo Philharmonic Orchestra later in the evening in the meadow on Goat Island. The orchestra compiled a group of historical musical pieces that were played 125 years ago.

Anniversary events continue through the reminder of the year, including the "History Comes Alive" program, where historical figures such as Annie Edson Taylor, Frederick Law Olmsted, Nikola Tesla, Father Louis Hennepin and others who spent time at what is now Niagara Falls State Park, share their stories of the park with visitors.

Visit www.niagarafallsstatepark.com for a full listing of events.