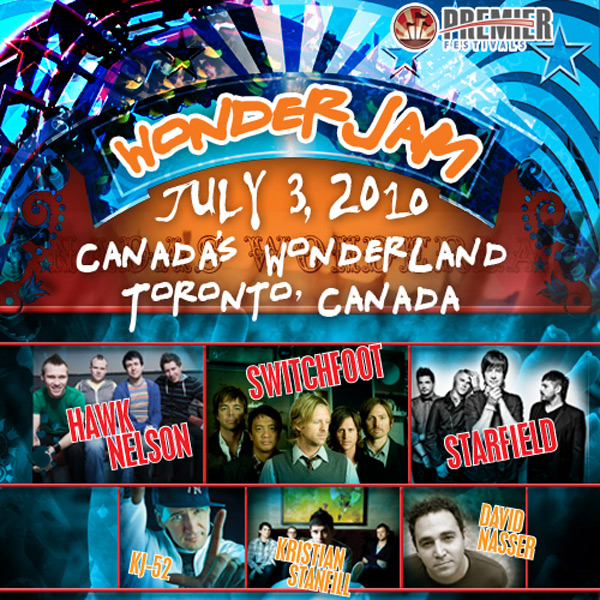 In a sense, Christian music takes a vacation each summer.

As the weather gets warmer, God-fearing rockers hit the festival circuit - and, locally, that means performing at amusement parks.

For these artists, performing at a theme park is less about the rollercoasters and more about the audience.

"It is kind of an interesting phenomenon within the genre where the big festivals happen, and people come from far and wide to be a part of it," Starfield vocalist Tim Neufeld said in a phone interview. "There's a lot of great things about being able to have that many people together, obviously, for the musicians," he said. "It's fun for us to get up on stage and, you know, instead of doing 10 shows of a 1,000, you get to be in front of 10,000 people. There's just that really cool, electric, amazing atmosphere."

"It's just an opportunity to just speak into, and influence and impact that many more people, at the same time," he added. "It also makes for a better show when there's that many people. There's just a real, I think, shared energy and excitement."

"That's the beautiful thing about festivals, you know?" he said by phone. "When you do your own shows, it's like you have your own fan base or (people) that are coming to see just you guys. But, you know, this time around we're playing this festival (and) Switchfoot is going to be there. So, you know a lot of Switchfoot fans are going to show up, and maybe they've never took a chance to listen to Hawk Nelson before. So, hopefully they'll gravitate toward what we're doing and say, ‘Those guys are interesting.' You just kind of make new fans as you go."

Switchfoot drummer Chad Butler said festivals allow musicians to interact with one another.

"Festivals are always an incredible chance to be on a big stage," he said in an interview. "There's that energy in the air with that many people gathered in one place.

"We love playing with other bands; getting to meet other musicians. I think there's, sort of, a different chemistry that happens between the audience and the bands when you're outside in a big environment like that. We look forward to those shows."

Plus, Butler said it's fun to play outside.

"We play most of our shows during the year indoors in dark, sweaty rock clubs," he said. "To be outside and just breathe in the fresh air is amazing. I look forward to it. It's going to be an incredible chance to play music and enjoy the summer."

When cooperative, Neufeld said nature is a considerable motivational tool.

"If all is well ... and you get a beautiful night, it can be just amazing," he said. "If the stars are shining - especially in what we do - while you're trying to connect with who we believe is the creator of those stars, it can be a really powerful element."

Other acts in the Wonder Jam lineup this weekend include KJ-52, Kristian Stanfill, David Nasser and Manic Drive. For more information on the concert, or to purchase tickets, visit http://www.premierfestivals.com.