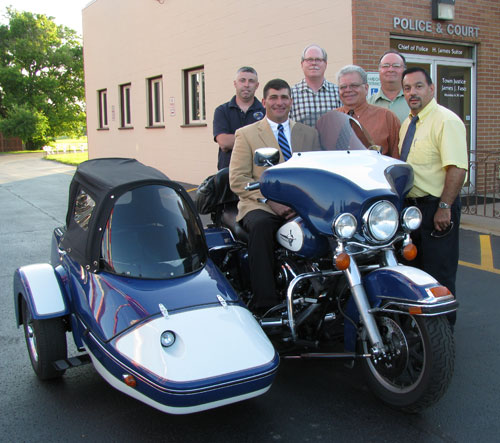 Town Board members admire Russell DeFranco's motorcycle after Tuesday's meeting in which they approved his appointment as a part-time Town of Niagara police officer. DeFranco brought his motorcycle for fellow bike enthusiast Supervisor Steve Richards to see and test drive. (photo by Susan Mikula Campbell)

The Town of Niagara Town Board gave approval Tuesday to go ahead with a plan to acquire by eminent domain property adjoining the entrance to Veterans Memorial Park on Lockport Road.

The property the town wants to acquire by eminent domain is a small strip of 0.87 acres, 90 feet wide and about 400 feet long on the right side of the entrance to the park.

Talks with the owners of property (part of a much larger parcel) have been going on for years, according to Town Supervisor Steve Richards.

Last month, legal representatives of the heirs of the owners suggested concessions for the larger parcel in exchange for the property the town wants, saying the U.S. Border patrol might build new offices there.

Richards trumped the offer by stating that the Coast Guard is looking at more than one location in the area, including the former U.S. Army Reserve site next to the Niagara Falls Airport, which the town now controls and plans to develop.

The property the town seeks by eminent domain would create a buffer from any development to the east of the park and save old growth trees there, permit straightening of the immediate entry off Lockport Road to a 90-degree angle and allow improvements near the entrance such as a park information board and a safe parking/drop-off area for bikers, walkers and skaters.

Under eminent domain, the property would be assessed by an independent appraiser and the owners offered a fair price, Richards said.

DeFranco said he was putting in 12 to 14 hours a day when he first took on the insurance agency, "but now I've got the place running pretty good." He missed police work and started thinking, "what I wouldn't give to come back for a while."

He met with Town of Niagara Police Chief James Suitor during Police Week at Fashion Outlets of Niagara and discovered there were openings in the department.

DeFranco, a former Law Enforcement Academy instructor, said Suitor was looking for an officer who was able to break down barriers by getting out of the police car and speaking with people in the neighborhood.