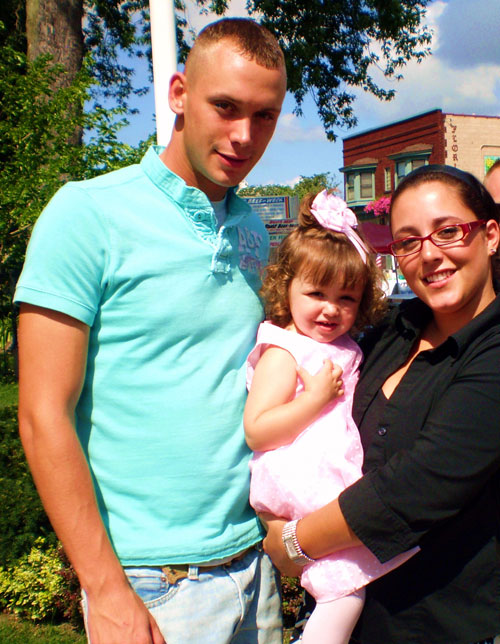 Alan Dikcis is shown with his daughter, Sophia, and her mother, Nikki Brown.

Sophia Mariana Brown draws pictures for her daddy. Every week, her mom attaches a picture to a balloon and they watch it float away.

At 3 years old, Sophia is too young to really understand that her father isn't coming back. When Wheatfield resident Alan Dikcis was killed in Afghanistan in March, it was explained to Sophia that he had become an angel and was now with Jesus.

"She's content with that," said her mom, Nikki Brown, adding, at least for now.

Dikcis had U.S. Army benefits that should come to Sophia when she's 18. In the meantime, Nikki, 23, a graduate of Niagara County Community College now studying business administration at Buffalo State, is struggling to accept that the emotional and financial support that Dikcis always provided for raising Sophia is gone.

A small group of local volunteers has stepped in to help with the financial aspect of the problem. Wheatfield town employees Don Wallace and Mary Beth Long, with about 10 committee members, have put together A Benefit for Sophia Brown.

"This has been a privilege to work on this benefit in honor of Alan," Wallace said. "Sophia will grow up and never forget what a great young man her father was and the courage that it takes to keep all of us free."

A Benefit for Sophia Brown will be held this Saturday, June 12, at the Wheatfield American Legion Post 1451 at 6525 Ward Road, Sanborn.

Doors will open at 2 p.m. The $20 entry donation includes a spaghetti dinner and a sheet of tickets for the basket auction. Additional ticket sheets will be available for sale as well as tickets for a separate special auction of items such as a $1,000 necklace from Whitenight Jewelers, a 42-inch LCD television, an autographed Ryan Miller jersey, a Jim Kelly football and other sports memorabilia. The basket auction begins at 5:30 p.m.

The USA Band will play between 2:30 and 6:30 p.m. DJ Mike Zarbo also will be entertaining throughout the day.

The spaghetti dinner, prepared by Niagara-Orleans BOCES Food Service Director Robert Ihle and his students, will be served between 3:30 and 5:30 p.m. The sauce has been provided by Francesco Rinaldi, meatballs by Rosina, bread by Stroehmanns and coffee by Tim Hortons.

Sophia, Nikki and other members of the Brown and Dikcis families will be attending.

"I want to give the deepest thank you to everyone who has contributed to the benefit," Nikki said. "It means a lot to our family that the community has extended such an effort on Alan's behalf for his daughter."

Wallace said he first formed his committee after reading the article about Alan's death in the Niagara-Wheatfield Tribune in March that mentioned how the Dikcis family wanted a real flagpole for their Walmore Road front yard. With three sons in the military, the family always displayed at least one flag on their home. (Stan Dikcis is still recovering after being injured in Afghanistan before Alan's death. Tom Cannuli is serving in Iraq.)

However, David Cirino, younger brother Robert Dikcis' Cub Scout leader, found a used flagpole, which the Scouts painted. Then, both wings at the Niagara Falls Air Reserve Station stepped in to help install it in time for the first flag to be run up on Memorial Day morning.

With the flagpole taken care of, Wallace and his group met with the family to see where else they might help. It was decided that the greatest need was being sure Sophia had what she needed now that her father is gone.

Like Nikki, the rest of Alan's family remains overwhelmed by his loss.

She and Alan's father, Bob, take turns watering the plants at Alan's grave and making sure the American flag remains in place there. There's the ache of coming across Alan's belongings at the house, most recently a pair of summer sandals.

"You wake up each morning thinking about him ... it's almost like you're still waiting for him to come home, even though you know he's gone," she said.