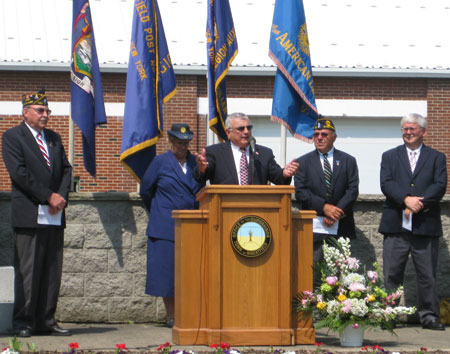 Honoring the fallen on Memorial Day

The crowds weren't huge and the ceremonies not lengthy, but the feelings were sincere at Memorial Day ceremonies Monday in the Town of Niagara and Wheatfield.

Among those attending were members of the family of Wheatfield's fallen soldier Alan Dikcis, whose life was cut short on March 5 by an explosive device in Kandahar, Afghanistan.

It was the first Memorial Day observance speech as supervisor for Cliffe. In part, he said:

"The most sobering experience of my life was the day that I visited the Vietnam Memorial in Washington. I recall the incredible quietness of that hallowed ground as we searched for the name of my lost friend, Bobby LaFountain. Just a friend, a regular kid trying to find his piece of the American dream, Bobby left high school, was drafted into the Army and headed for Nam.  He didn't come back.

"Today as I remember Bobby LaFountain, most of you remember the name of a fallen father or son, a friend or buddy in war.  I urge you all to state that name, right now, loud and proud; state the name or names of those you wish to memorialize.  That is why we are here today: to remember them, and others.  When you realize that each man or woman's sacrifice is very personal to someone, the real meaning of Memorial Day comes to life.

"On March 5, Wheatfield lost one of our sons. Spc. Alan Dikcis grew up on Errick Road and graduated from N-W in 2006.  Although Alan's older brother was seriously wounded in Iraq, Alan did not deter from the Army he loved.  He took a tour in Afghanistan, then went back again; this time he gave his life.  With us today is his beautiful little girl, Sophia.  Perhaps Sophia will come back here each year and help us remember how personal this day can be?  Spc. Alan Dikcis stood up for America; today we stand up for him."

In his remarks, Ross praised the Wheatfield American Legion Post 1451 for its stewardship of the town's commemorations and urged fellow Niagarans to make a daily effort to remember the sacrifices of veterans and war dead and to give thanks for the freedom bought by their sacrifice.

"What we have to remember as citizens of this great country is that every day - every day! - we should take a little time from our day to honor those veterans who gave their lives, who made the ultimate sacrifice," Ross said. "Remember, we wouldn't be living under that flag of freedom if they hadn't made that sacrifice."

The Town of Niagara Lions and Lioness Clubs held their annual Memorial Day ceremony Monday at the Witmer Road Cemetery, with similar rites. Among the speakers was Airman 1st Class Christina Robinson from the 914th Airlift Wing at the Niagara Falls Air Reserve Station.

"It was absolutely beautiful," he said of Monday's weather. But in the history of the Lion's Club's observances that has not always been the case

"We do this rain, shine, sleet or snow, for one person or 100 people. I always say it's the least we can do for the people who gave their lives for our country," he said, adding that he wished more people took the time to come. "I just wish we could fill up that field with people."

Congresswoman Louise Slaughter issued a statement to honor Memorial Day from Washington, D.C.: "Servicemen and women are our country's greatest heroes. I want to take this Memorial Day to thank each and every one of our men and women in uniform for their sacrifice on behalf of our nation. We are forever indebted to their bravery, selflessness and courage, especially those who gave the ultimate sacrifice."

"On the battlefield, the military pledges to leave no soldier behind.  As a nation, it must be our pledge that when veterans return home, we leave no veteran behind. We must ensure that these men and women receive the care and benefits that they have earned, especially as new veterans return home from the missions we have asked them to undertake in Afghanistan and Iraq. We must encourage soldiers completing their active duty service to sign up with the U.S. Department of Veterans Affairs (VA).  This is a critical message to reiterate to all our returning servicemen and women," she said.

Boy Scouts and Cub Scouts were also involved in many community Memorial Day weekend events and placing flags by gravesites across the country.

A.J. Leonetti of Wheatfield, who is assistant scoutmaster for Troop 229 in North Tonawanda, said his Scouts marched in the NT parade. His grandson, Second Class Scout Hayden Holmes, also placed a flag at the headstone of his great-great uncle, Pvt. Bruno Schipani, who was killed on July 13, 1944, during the Normandy invasion. Hayden considered the service project an honor and a privilege, saying "It felt good."