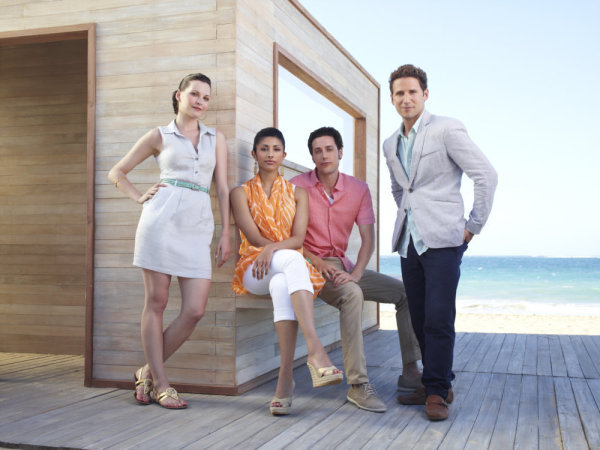 In the season one finale, Evan tells Hank that the funds from HankMed, their Hamptons-based private medical practice, are gone. And not just missing, but taken by their absentee father.

Despite a stellar real-life reputation Feuerstein says Winkler was the perfect choice to portray such a lousy character.

"You know, the brilliant thing about casting Henry Winkler is if you've ever met Henry Winkler, if you've ever seen him in an interview or just loved the warmth and humanity that comes from him in his acting, you know that this guy is arguably possibly the nicest guy in Hollywood - as he is referred to on TMZ for those of you who've seen that," he said in a phone interview. "So, to have this sort of errant father played by the nicest guy in town is a perfect juxtaposition because you think he's the sweetest; you think he means well and yet he's done all of this bad stuff.

"And it's a perfect - it's perfectly reflected in the character of Eddie R. Lawson, who is a total hustler; always trying to play an angle but playing it with such sweetness that you almost wonder - like on an episode of ‘Survivor' or something - whether he's being genuine or not.

Hank's on-again, off-again gal pal, Dr. Jill Casey (Jill Flint), also has some troubles in the premiere. Her mentor tries to get her kicked out of the administrator post she holds at the fictitious Hamptons Hospital.

Though "Royal Pains" tends to fall on the lighter side of drama, Feuerstein says the characters are headed for troubled waters this season.

"If I had one thing to say to the writers this year, which I did say in a conference room where I am lucky enough to have executive producers who invite the actors to 'be part of the creative process, I said, ‘Hank Lawson is a fantastic character, a great hero,' " he said. "But if there was a way to see some of the dirt under his fingernails, a little of the mess in his life that would be just a bonus to add dimension and depth to the character. And enter the character of Eddie R. Lawson, our estranged father.

"He brings up all of the range and resentment that Hank has felt from being abandoned by him about 20 years ago. And with it comes all of these emotions that Hank hasn't felt for years and years. And in getting to deal with them, I get this great challenge as an actor.

Feuerstein says he's excited to work with his new television dad. The family dynamic, he said, has "been just an incredible ride for Paulo Costanzo and Henry Winkler and me. And something about the chemistry of the three of us literally feels as if somehow unbeknownst to us, we are actually brothers and father and sons."