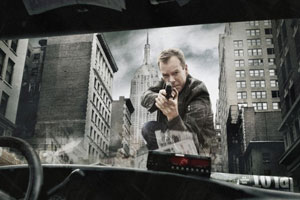 On May 24, "24" ends its remarkable run on Fox with a two-hour finale. In the episode, Jack Bauer (Kiefer Sutherland) will look to right the wrongs of Day 8, actions that included the murder of his love interest, former FBI agent Renee Walker (Annie Wersching).

Fans of the show have come to expect Jack to save the day. But, for as many times as the American hero has rescued his country, he's never been able to protect his personal life.

In season one, Jack's wife, Teri (Leslie Hope), and daughter, Kim (Elisha Cuthbert), were kidnapped - the former ultimately killed by one of Jack's former Counter Terrorist Unit partners. Then in season three, he was forced to take heroin to infiltrate a drug cartel. At the end of season five, Jack is kidnapped by the Chinese government and held in a prison for 20 months. When season six ended, it was revealed Jack's girlfriend, Audrey Raines (Kim Raver) was, herself, kidnapped and traumatized. In season seven, Jack was estranged from his daughter and exposed to a lethal nerve toxin.

Season eight started out with the promise of a happy ending for Jack. Cured and mended, he was set to leave his past life of action and mayhem and move closer to Kim, her husband, and their daughter. Even halfway through the season, when, inevitably, Jack was pulled into another conflict, fans could still see him getting back to his family - and moving on with Renee.

Low and behold, no sooner did Jack and Renee, um, cuddle, than she was murdered. Jack proceeded to embark upon a path of revenge, appearing darker and more disturbed than ever before. With only a few episodes remaining in the season, any hopes of Jack living a "normal" life quickly went out the window.

"24" Executive Producer Howard Gordon said it was unrealistic to give Jack a happy ending.

"One thing we tried and didn't work was happily ever after for Jack," he said during a conference call. "What he has done, forget about the last eight seasons, but in these last six episodes or what he'll have done in the last six episodes which you've not seen yet leaves him once again in a very compromised place morally and ethically and emotionally. This show is a tragedy and so to give Jack a happy ending just didn't feel authentic. We gave him a happy beginning, and I really am very pleased with the way we started and, of course, gave him something to care about with Annie Wersching and his own family. And of course, circumstances and the story dictated a kind of very complex confrontation."

It's unclear whether Jack will live or die in the "24" series finale. Gordon and Sutherland have spoke of expanding the story into a feature film. Presumably, that means Jack has to live - at least until then.

In any case, Gordon says the television series will conclude with a bang.

"Going out to where the end and what we can expect is the things that were aligning, which were basically Chloe versus Jack versus President Taylor, we're taking all these characters to places that we've never seen them before," he said. "We knew it constituted a risk and one that was frankly challenging to write and, among the actors, pretty challenging to play. But it was one really we think was worth taking and I think it pays off really well in the end. But in the spirit of trying to take the series to a place where it hasn't been before, we've done this thing. It's certainly not playing it safe, but it is very emotionally climactic and, we think, we're pretty excited by it."
Categories
Behind the Screens Entertainment
comments powered by Disqus