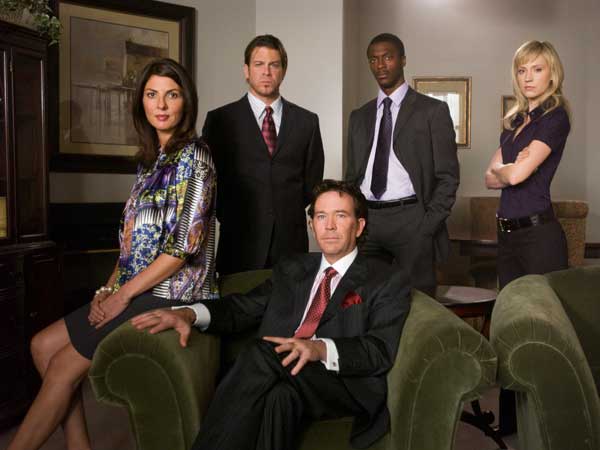 
When "Leverage" debuted in December, critics likened it to a modern day Robin Hood, applauding its timely portrayal of do-gooder thieves robbing from the rich and giving to the poor.

While it's in fashion to bash modern big business, "Leverage" was, at the end of the day, just a fictional cable television show. It didn't actually change this country's economic climate or provide justice for those injured by corrupt CEOs.

But that's OK because, again, it was meant to be a diversion from the fiscal woes of our time, not a solution. And, in terms of entertainment value, "Leverage" was a standout for its perfect blend of spy-caper drama, high-energy action and witty sarcasm.

As the first season ended, and a major score unfolded, each member of the group had to decide if the team would remain intact or if the former solo artists would return to a life of solitude.

When the show returns Wednesday, July 15 (9 p.m., TNT), the "Leverage" crew is back in action, with new digs and new bad guys to chase down.

With nine episodes already shot, Riesgraf says season two ups the ante across the board.

"It's going so great," she tells "Behind the Screens" in an exclusive interview. "We got to see the first two episodes and we're all really happy. We feel like it's an even better season. You know, stronger. The locations are fantastic, being in Portland. Our chemistry is great. It's just fun. It's really, really fun."

While "Leverage" is very much an ensemble show, and its stars tight-knit on- and off-screen - "We hang out on and off the set," Riesgraf says - there's no denying the actress' charm as Parker.

With just one name (first, last - who knows?), and little back-story, not much is known about Parker. What we know is what we see: she's a very likeable, somewhat socially inept girl, who is the absolute best at what she does: propelling off buildings, gliding through tight spaces and evading pursuers.

Riesgraf, herself, was given little information when first reading for the part.

"Agents sent me the audition and, basically, I didn't have much to go on," she says. "I didn't have a script; I had a scene that I was auditioning for."

Though she often finds herself at a loss for the right words, Parker can seemingly get in and out of any situation.

"I loved the description of the character; I loved the concept," Riesgraf says. "You know, I'm a big fan of (executive producers) Dean (Devlin) and John (Rogers), and I heard that Timothy was involved, and it was really exciting. I loved the whole concept."

Whether in costume - Parker pretends to be a nun and a federal agent in the season two premiere - leaping down a stairwell or trying to make friends, Riesgraf's character is a valued member of Nate's team and an amiable part of the show.

Riesgraf says that's the result of both good writing and gut reaction.

"In the beginning, I read the character description, and it had a lot of adjectives in it," Riesgraf says, laughing. "You know, I think, as an actor, you can read that, and then you still have to go with your gut and figure it out for yourself. But, in the beginning, I went off instinct and, since then, they've loved things that I've brought to the character. Some of the things I think they envisioned are there. And I've surprised them with other things. They're great at bringing things to the table each episode that maybe I wouldn't have thought of.

"It's a great team effort, actually."

Riesgraf also enjoys the physical aspect of the role. Since Parker is a daredevil, the actress is often running, diving or jumping.

"I do as much as I physically can do," Riesgraf says. "Last year, I did do quite a few of them - but I also had really great stunt girls."

Though her character effortlessly maneuvers through the toughest obstacle courses, Riesgraf isn't quite as smooth in real life.

"Sometimes ... I am laughing because I am so clumsy sometimes," Riesgraf says. "There are days when I'm like, ‘Really? That's what you're going to do right now?' If they take some of these outtakes, it's hysterical."

In a recently filmed episode, "I was carrying a tray with these champagne glasses and, not once, but twice, out of just nothing, I like broke them both," Riesgraf says. "There was champagne all over me, and I was just standing there.

Of course, when it comes to personal interaction, Parker is the klutz. In season two, she continues to be wooed by Hardison, which is somewhat awkward for her.

Riesgraf says a romance is possible, but it's going to take time for Parker to figure out her emotions.

"I think that people are anticipating something there. They can feel it; they can sense it," Riesgraf says. "(But) I think to rush that romance or to force it wouldn't be right, either.

"With where these people come from, these characters, with their back-stories ... and trying to stay as true to that as possible, it's going to take some time."

"You can't change someone like that overnight," she says.

In season two, the tone of "Leverage" will continue to be playful, as wrongs are righted and victims avenged.

Riesgraf says the show is as much fun to make as it is to watch.

"Basically, we get paid to show up, and play, and work our butts off," she says. "And we love it. All of us feel really blessed to be part of this project. It doesn't feel like a job.

"We all work very hard, and we take it very seriously. But, at the same time, we feel really lucky to have the group that we have."

"It's so fun," Riesgraf says. "The fact that we, as artists, get to play characters within characters, is so fun."
Categories
Behind the Screens Entertainment