Photo and video by Larry Austin 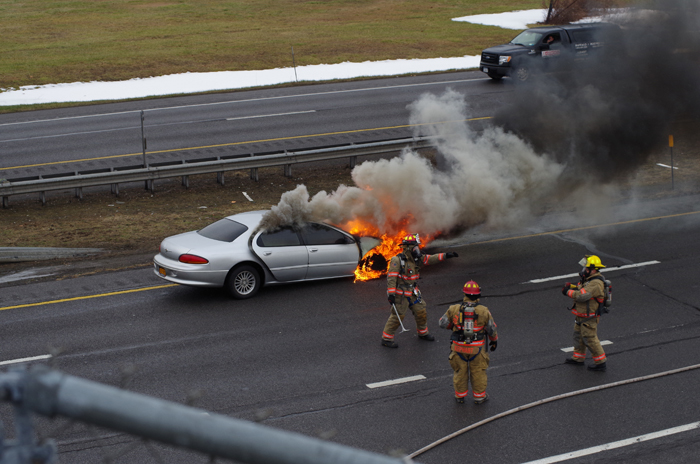 A car fire broke out on Friday, Jan. 11, by the Buckhorn Island onramp ahead of the northbound Grand Island bridge. Despite the large flames and billowing smoke, no one was reported as injured.

The Grand Island Fire Co. was on sight to battle the blaze. Firefighters returned to service at 2:15 p.m., and regular traffic soon resumed.

A video and the full story are below.

At 1:33 p.m. Friday, Jan. 11, Grand Island firefighters responded to a vehicle fire on the I-190, just north of the Long Road interchange.

Grand Island Fire Co. Chief Kevin Koch reported that a 2003 Chrysler Concord was "fully involved" when engines Nos. 4 and 2 and fire suppression crews arrived on location. The driver, Tonja Pierson of Buffalo, related that she heard a "popping" noise from the engine compartment and pulled over to the center median when smoke and flames started pouring out from under the hood. The fire was extinguished within six minutes and damage was estimated at $2,500.

A northbound traffic jam was alleviated when the burned out vehicle was towed away. GIFC units returned to service at 2:15 p.m., according to Koch.