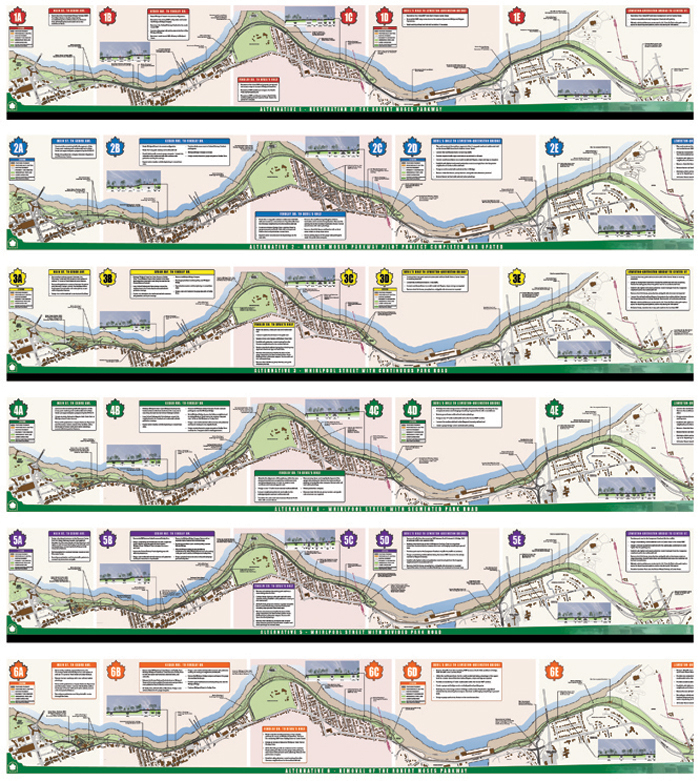 >>DOWNLOAD a copy of each design for a closer look

For those who didn't download the Robert Moses Parkway North PDFs from our website, Monday's State Parks-sponsored open house was an opportunity to see the concepts for the first time. And for those who did access the electronic files, Monday's event was a chance to ask questions about the six designs, which range from complete parkway restoration to complete removal.

"They seemed to have done a good job," said Bob Baxter, a member of the Niagara Heritage Partnership. He called the six proposals, produced by Parsons Transportation Group, "very thorough."

"We were just trying to start with the two extremes, and then looking at what was in between," said Parsons Project Manager Thomas Donohue. "What we're trying to do now is get feedback from everybody."

The six proposals are the result of two prior public input sessions and the project objectives devised by the state Department of Transportation, USA Niagara, the City of Niagara Falls and the state Office of Parks, Recreation and Historic Preservation. Review and revision of the designs is part of the scoping process, which is expected to finish in December.

"Our consultants did an excellent job," said State Parks Landscape Architect Andrew Giarrizzo. Parsons received a total of 355 comments (179 from individuals, 186 pieces of correspondence), which were catalogued and available for review at Monday's meeting. Giarrizzo said Parsons was very creative in interpreting the data and formulating the six current proposals.

Alternative one is the full, four-lane restoration of the Robert Moses Parkway. Number two is the completion and updating of the pilot project, which is the roadway's current configuration.

The third alternative is the one favored by the River Region-based Parkway Preservation Committee. It's described as "Whirlpool Street with continuous park road," and directs traffic thusly:

•Main Street to Cedar Avenue - Remove the roadway segment between the Discovery Center and the Aquarium of Niagara and replace it with an "S" curve to Third Street at Cedar Avenue. Remove the pedestrian overpass between the aquarium and Discovery Center; connect the facilities with a landscape of broad walks and native plants; accent with interpretive features. Design the multimodal trail to service both facilities.

The Parkway Preservation Committee also likes part of alternative four, which is also known as "Whirlpool Street with segmented park road." This option differs from No. 3 in that it calls for the following:

•Findlay Drive to Devil's Hole - Meander the alignment of the parkway within the area already disturbed and occupied by southbound and northbound pavements in order to create a more curvilinear and interesting park road. Design a new, 13-foot-wide (more narrow) multimodal trail. Connect neighborhood streets and walks to redesigned park road and multimodal trail. Transition the park road onto Lewiston Road at Devil's Hole with a roundabout.

•Devil's Hole to Lewiston-Queenston Bridge - Redesign the interchange at the bridge and Lewiston Road by removing the four overpass structures and bringing everything to ground level with a roundabout. Restore ground areas with soil and native plantings. Design a new, 13-foot-wide multimodal trail in the former RMP corridor. Connect said trail to the NU rail bed trail. Create a gorge/bridge scenic overlook with parking.

"We obviously favor a combination of three and four," said former Village of Lewiston Mayor and current 12th District Niagara County Legislator Richard Soluri. A member of the Parkway Preservation Committee, he added, "It's best for the region. It's best for economic development. It's best for visitors.

"It protects the large investments that have been made to Lewiston and Youngstown and beyond."

Lewiston resident Zach Collister said option three "is the best aesthetically and it still connects all the communities." He described it as an "educational parkway" plan that would direct visitors from the aquarium and Discovery Center to Artpark and Old Fort Niagara.

Collister said it's important that Niagara Falls, a tourism-based city with hotel rooms to fill, have direct access to Lewiston and its attractions (Artpark, Whirlpool Jet Boat Tours, historical buildings/events).

"It's a community that supports a community. ... The Robert Moses Parkway connects everybody," he said.

Alternative five is "Whirlpool Street with divided park road." It calls for one lane of traffic on both sides of the RMP, and one lane of natural surface.

With a parkway, he said, "You eliminate every positive potential that we've worked for."

Those in attendance Monday - and those who visit the State Parks website - are encouraged to view the six alternatives, grade them, and return comments by July 8. Those three or four alternatives with the most favorable comments will continue on in the scoping process.

Following preliminary assessments, Giarrizzo said the draft scoping report is expected to arrive in August or September. Once the scoping process is finished, a detailed study will be created and discussed at a public hearing. The final step is a record of decision.

In a best-case scenario - and assuming state and/or federal funding is in place - Giarrizzo said a final action could take place in about two years.