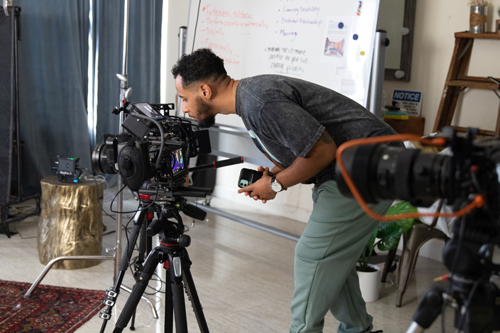 Shown are behind-the-scenes images of "Victory Formation," a new series that highlight Western New York athletics. The show is expected to stream sometime this month. (Photos by Deidre Book)

Niagara Falls native Justin Gilmore has come back to Western New York to cover the biggest players when it comes to football in the region.

“Victory Formation” is an 11-episode series that highlights the various challenges faced by the well-renowned football programs in Buffalo. It features the Canisius Crusaders, who face the most-demanding schedule ever in the history of the program under a new coach, as they visit four different states and compete against two opponents.

As the creator, producer, director and writer for this series, the Niagara Wheatfield High School graduate said he sought to capture the realities that happen in the locker rooms, on the field, in the classrooms, as well as get a glimpse into the home life of these young athletes.

“I didn’t cut anything to cheat or to sell the storyline … the story tells itself,” he said. “This isn’t a social media highlight clip of the game. This is storytelling and filmmaking. It’s driven by reality instead of creation.”

The series covers the big three high schools when it comes to WNY sports: St. Francis, St. Joe’s and Canisius. In 2021, Gilmore and his colleagues at MountUp Media and Tanner Probus Visual began filming each of the schools’ football seasons.

“Canisius may be the main character … but it's really about sport in the Western New York area, and these are three schools that actually take this (seriously), and they put kids in college through sport,” he said.

Gilmore explained the series aims to give an honest look at the teams, showing the in-between moments with the players, the coaches and the parents. It gives a raw look into tensions and disagreements encountered within the teams. Further, the series gives a glimpse into the students' resolve in the face of juggling academics, jobs and personal hardships. GIlmore said the series is not about winning a championship, but about what it actually takes to win.

“It’s just about having a vision, having a goal, and just seeing something through. Even if it doesn’t look the way you want it to look,” he said. 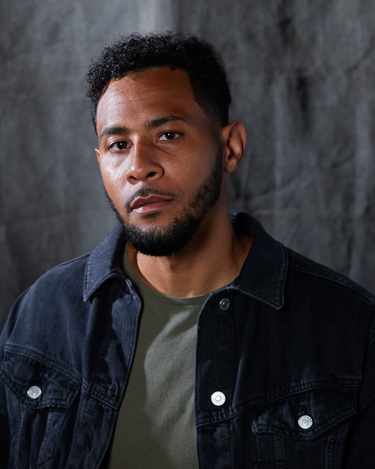 Shown are behind-the-scenes images of “Victory Formation,” a new series that highlight Western New York athletics. The show is expected to stream sometime this month. (Photos by Deidre Book)

Gilmore produced this documentary through his production company, Matthew Synclair, and he said this is his first production of this kind. Being a football player in his youth, and eventually playing Division I football at the University of Louisville, this was a personal project for Gilmore. He said the values of hard work, grit, discipline and dedication were taught when he played football, and contributed to his success as a businessman.

Being in the locker room again, and being on the field alongside the athletes while he was filming the sports teams brought back precious memories, as he remembers being in these athletes’ shoes.

“I take all these things I learned from the game of football and I apply them to life, and they translate,” Gilmore said. “I want the area to see … that reflection also, and be like, ‘We can do this here, too.’ I want people to start taking sports (seriously), because it provides (opportunities) for young people.”

Gilmore explained he wants to be honest in his work, and hopes to inspire others in Niagara Falls to believe in themselves in whatever path they take in their career.

“I love sport, I love people, and I love storytelling; and I want this to live on as something inspiring,” he said. “I want another kid from Niagara Falls to be like … I can tell stories, too; I can be a filmmaker, as well. I may be an athlete now, but maybe I want to tell stories.”

Gilmore has supported local football and the Niagara Falls community in the past, notably collaborating with Preston's Playbook and under his Gilmore Scholars program, and this series is another addition to his devotion to the game of football, and his hometown.

“My area is important to me, and I think that anytime I can shine a light on kids in this area that may have walked in some of the steps that I walked through, or people that I believe are doing good work, I’m going to do that,” Gilmore said.

“Victory Formation” is anticipated to premiere later this month on Amazon Prime.