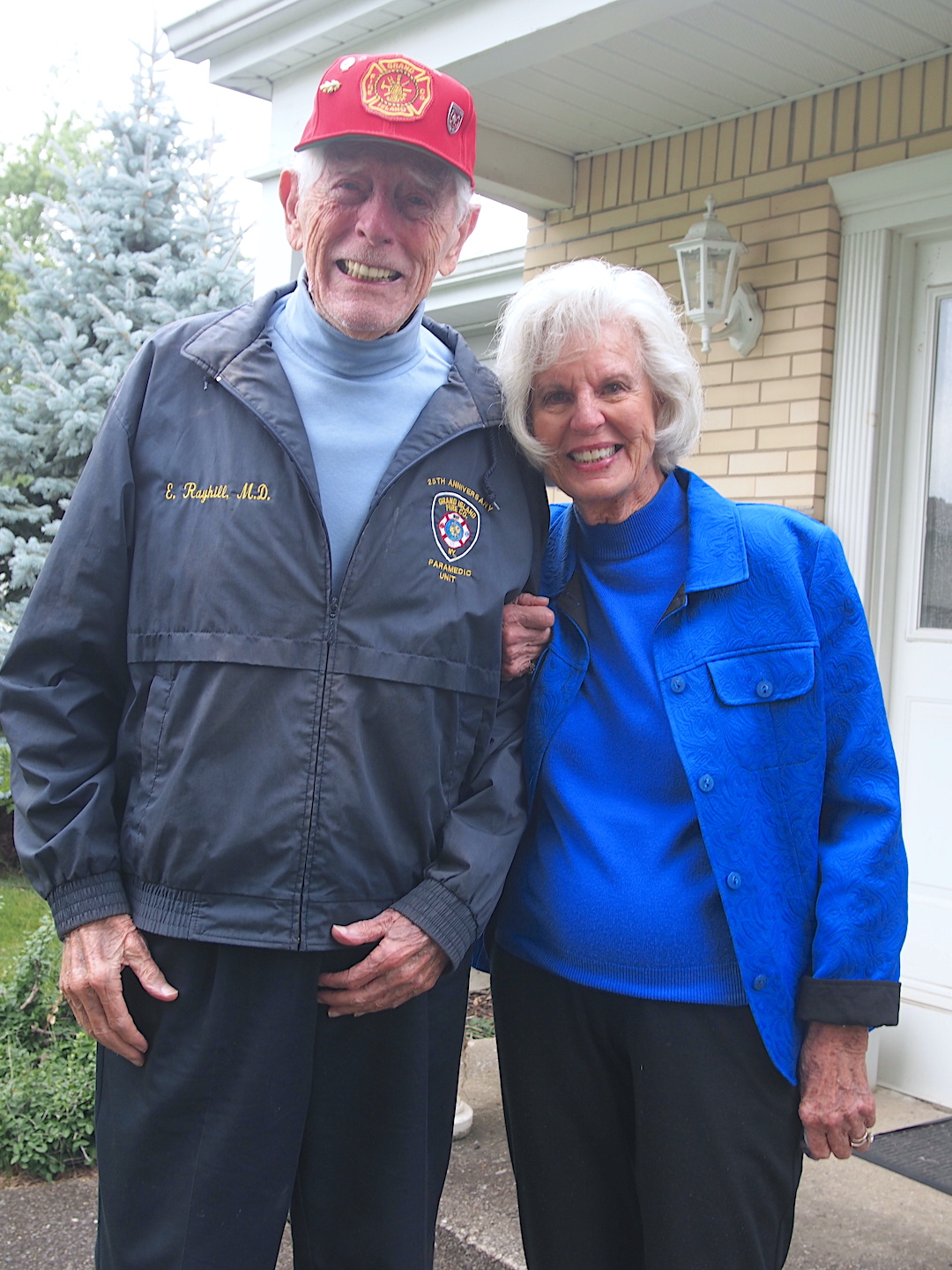 The Grand Island Fire Co. was established with 53 founding members in 1938. But it wouldn’t have the paramedic unit, for which it is now renowned, until 1979.

Dr. Edward “Ted” Rayhill, 93, the individual who was instrumental in creating the training program for paramedics, was honored Oct. 2, when members of the Grand Island Fire Co. came to his home for an inspection on his front lawn.

According to Greg Butcher, former fire company chief, “Dr. Rayhill has always been the foundation of our medical direction staff. Without him, we wouldn’t have the program we have today. We’re renowned in Western New York for being the oldest paramedic program. We owe everything to him. He put his license on the line when no one was willing to get into the paramedic business. It’s what created Grand Island as one of the best agencies in Western New York.”

“We wanted to recognize our medical director who started the EMS program,” Capt. Don Turner said. “He put his medical license on the line to make sure the community could have an EMS service. Many doctors are now carrying on his tradition, but he is the first one. We would not have paramedics here on Grand Island without him.” 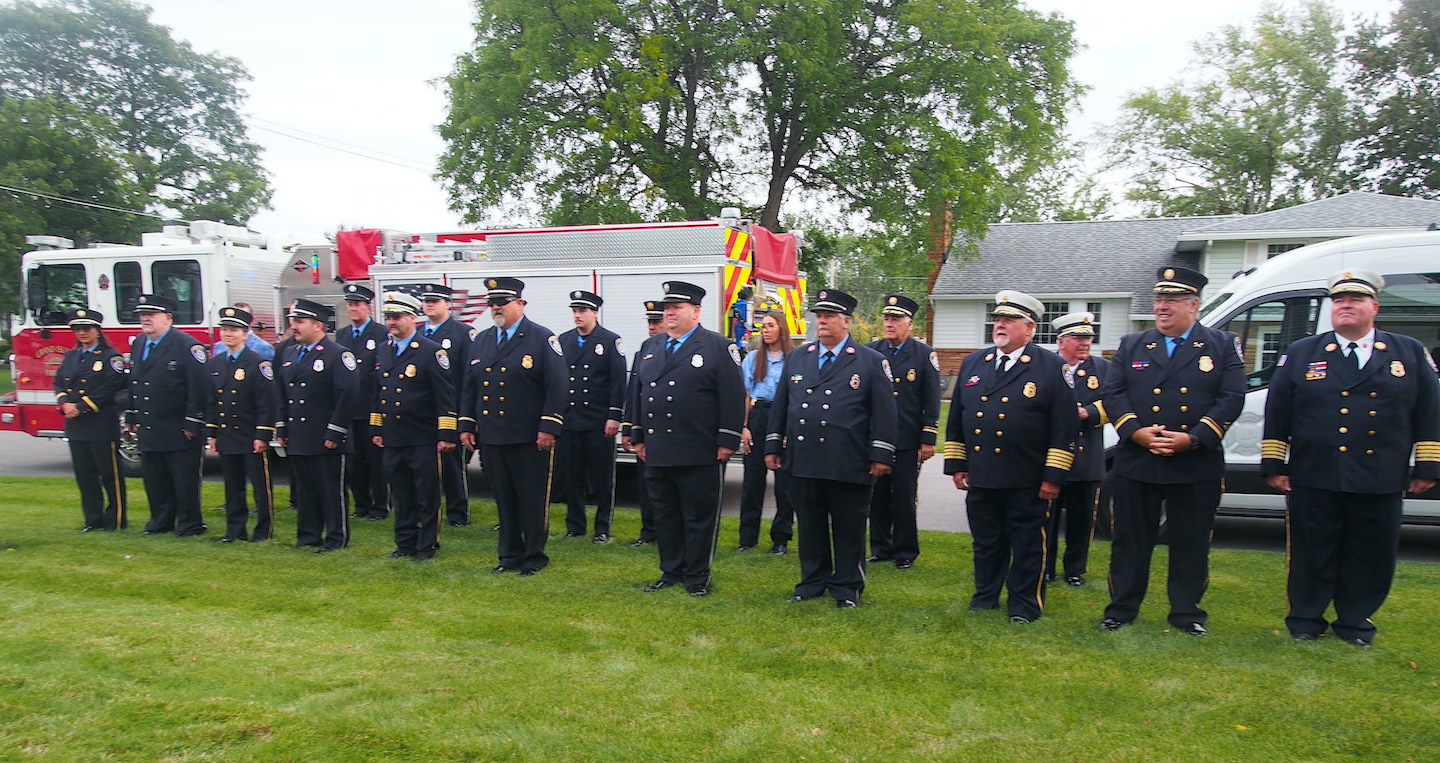 Rayhill’s daughter, Cathy Rayhill, said the fire company “made a decision that they wanted to honor him while he’s alive. He is 93 years old. They wanted to come and have him be part of an inspection ceremony. It’s a great honor. I've been incredibly proud of him for years.”

Rayhill, who opened a medical practice with Bob Miller, at Stony Point and Love roads in 1958, served as team doctor for the Grand Island Central School District, as well as the school doctor. Rayhill and Miller “assisted the fire company in many situations and accidents and that kind of thing. I recall that my dad was called to the scene of a car accident, where two young people had died that he felt had not needed to die but, because the fire department was not trained and we did not have paramedics, which was a problem,” Cathy said.

His wife, Joanne, said, “He was with the fire company, and he was on a call one day, and he had to save a person’s life. The firemen just stood around, not knowing how to do this. After the procedure was done, he realized that he had to train these firemen because he wouldn’t always be able to be with them on these occasions.”

“So, he began talking to some of the firemen,” Cathy said. “They began to talk about creating a paramedic program. My father was instrumental in training them initially. They established the first paramedic unit … it was either the first or second in New York state. Basically, that was the beginning. He and Bob Miller and Tom Sheehan rotated as medical directors for the fire company for decades.”

Rayhill retired from practicing medicine in 1997. In 2004, “New York state recognized him as having one of the first volunteer units in the state,” said his son, Mike Rayhill.

Rayhill passed the torch of medical practice on to his granddaughter, Melissa Rayhill Raskopf, Mike said. She is now a physician and, as a medical student, her grandfather participated in her ceremonies, first with the white coat ceremony in her freshman year and, when she graduated, he placed the doctoral hood over her head. The conferring of the doctoral hood is a special ceremony that occurs when someone earns any kind of doctoral degree.

Joanne said the ceremony on the lawn had a great deal of meaning for her husband, as well as his entire family.

“My husband, being aged, doesn’t go to the inspections anymore,” she said. “We thought, before my husband passed away, we would like to honor him this way and have the firemen come to the house on the front lawn, and let my husband inspect the troops by himself. I am sure that they couldn’t have everyone who is to be inspected come out. It would cause quite the traffic jam. They would send 15 or more over and have my husband have the honor of going to each man and giving the inspection.

“Paramedics who keep in touch with my husband just felt that, before my husband passes, due to his age, they would like to have him honored in this way, instead of waiting and honoring him in some other way after he’s passed, which I thought was a wonderful gesture on their part.

“I don’t know if he remembers how an inspection goes. But even if he just shakes their hands, it will be something, and my husband will be overwhelmed with emotion at this whole procedure, I’m sure. I was quite emotional when I heard all about this. What a wonderful gesture on the part of the fire company.

“We are no longer able to attend the fire company’s biannual inspections and go to the dinner afterward because of our age. I’m going on 92 also. We are mobile, and we get around in our house, but we don’t go to those events anymore, and that’s why they thought that it would be a nice way to honor him, to come over to our front lawn and allow him to inspect as many as are coming.”

After the inspection, Ted Rayhill said the event made him feel “wonderful. All of these people are just in my hands, and they are wonderful.” 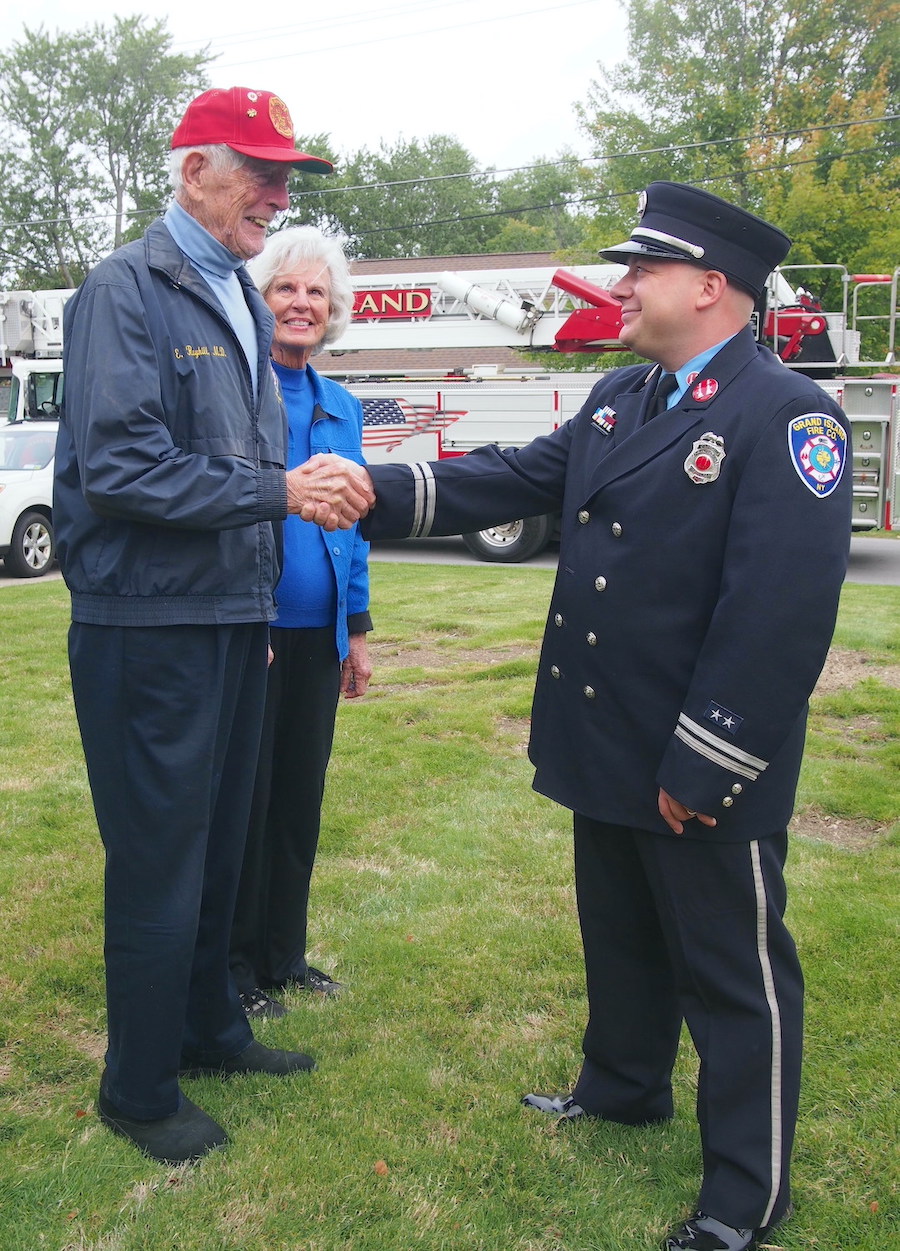 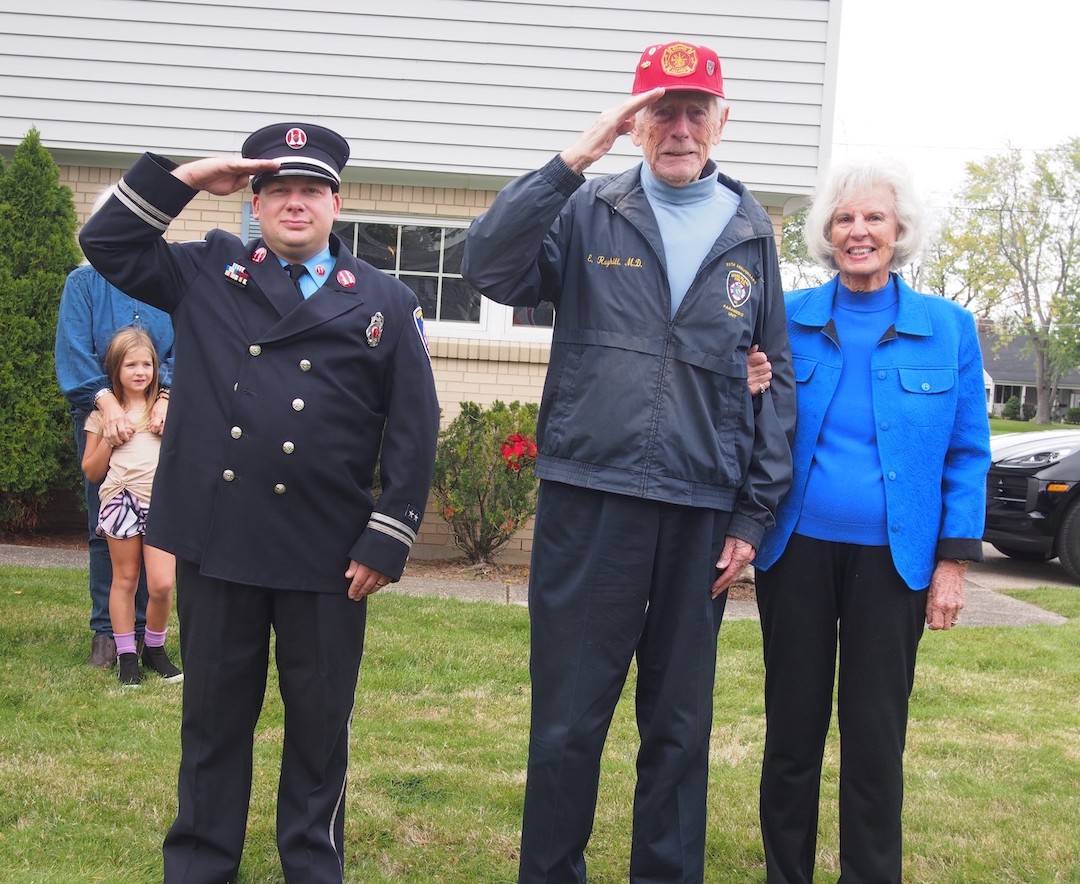 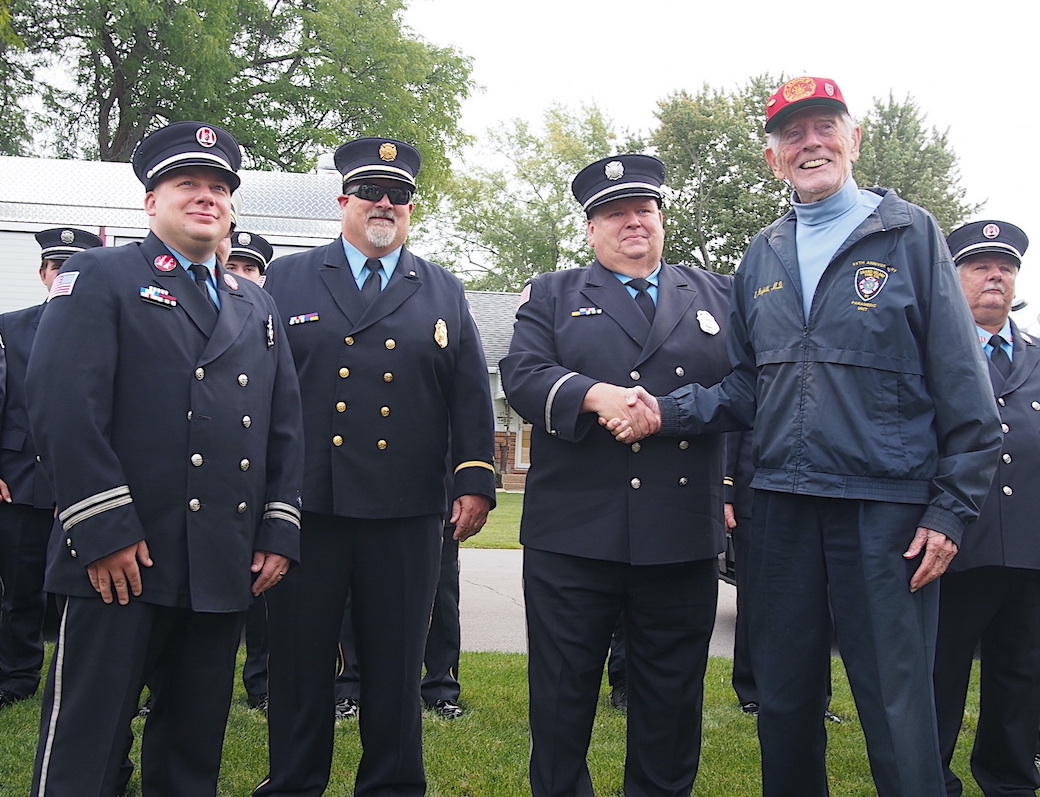