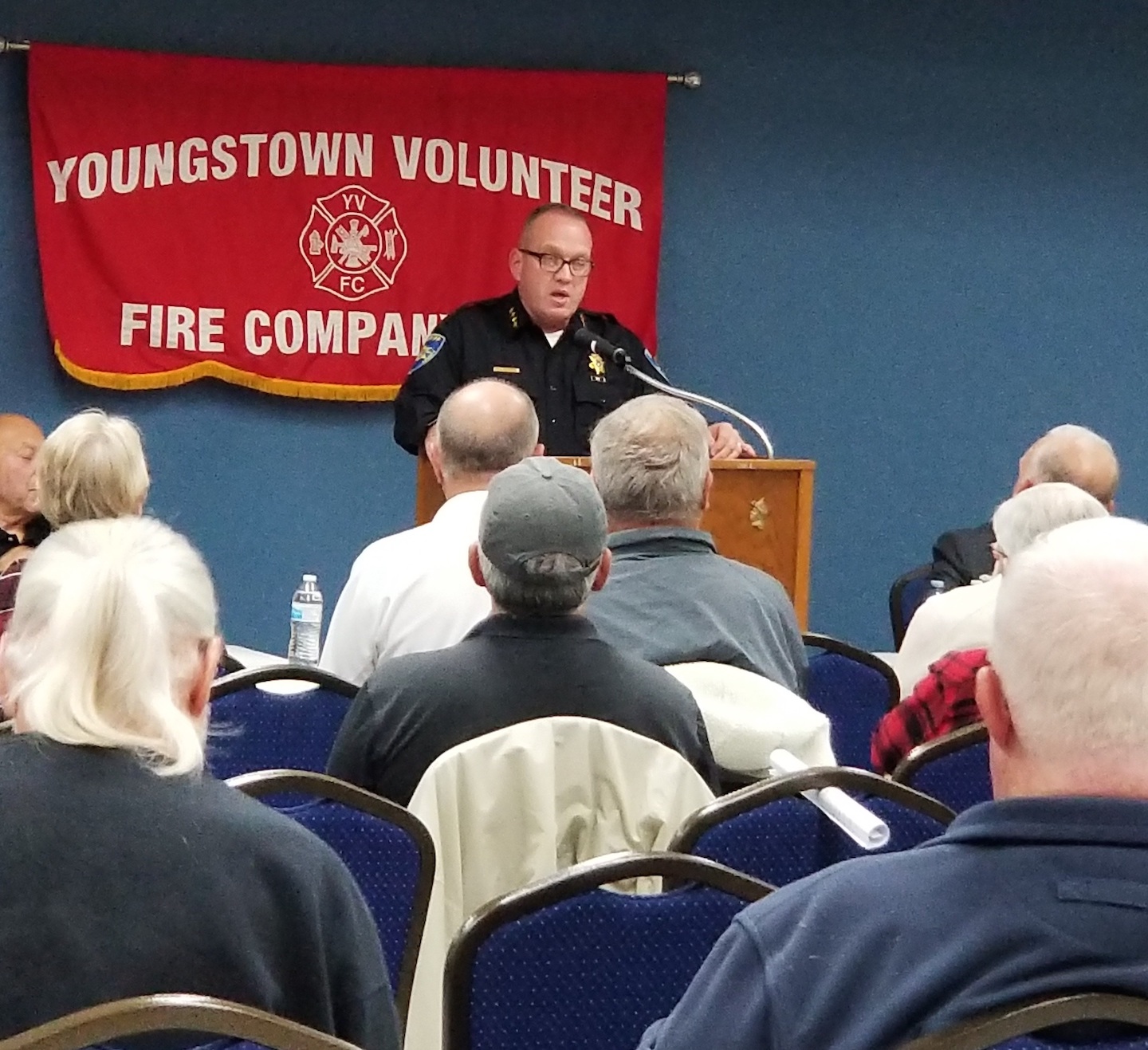 Story and photos by Terry Duffy

Presented by the Village of Youngstown and Town of Porter, the informational forum featured state and county officials including Niagara County Sheriff Michael Ficlicetti and County Clerk Joseph Jastrzemski, as well as Assemblyman Angelo Morinello and firearms advocate Ed Pettit Jr. of Second Amendment Forever Inc. All spoke on recent gun initiatives passed in Albany, and what’s ahead for Niagara County’s roughly 40,000 licensed permitholders, particularly with respect to concealed carry.

Filicetti spoke of the challenges the new law brings to gun owners.

“Under this new legislation, many areas are now considered ‘sensitive locations,’ and with laws on concealed carry, the possession of a rifle or shotgun may be prohibited. A legal pistol permitholder or legal gun owner may be charged with an E felony under this section,” Filicetti said.

He went on to detail a wide-ranging list of what are sensitive locations that impact the possession of firearms and the ability to carry. These include any government property; schools; health care facilities; public gathering places such as parks and sports/entertainment venues or places of worship; liquor establishments such as bars; and select private businesses.

The sheriff has spoken out of late on how he feels about the state initiatives, including a recent detailed article in this paper on concealed carry. He went on to tell attendees at the forum how he intends to address the issue.

“If we receive a complaint for a pistol permitholder to lawfully carry a concealed firearm in a sensitive area or restricted business, we will take the complaint,” Filicetti said. “No further action will be taken without authorization from me. Our priorities at this point are removing illegal firearms off our streets to make the community safer.

“Sensitive area complaints will be given the priority I feel is appropriate, based upon the circumstances. I’m not taking these complaints to arrest legal gun owners.”

The sheriff went on to express his frustrations on the state’s response to law enforcement, following earlier anticrime legislation passed in Albany. These include including bail reform, catch and release, the discovery requirements placed on police and prosecutors, and raising the age requirements covering legal gun possession. “We have been asking as law enforcement for a seat at the table, and they refused to give us access to have any say on these laws, any reform on these laws. … You really shouldn’t make any of these changes without talking to law enforcement first. And they failed to do that.

“These things are not working,” Filicetti said. “All these laws have made the community less safe.”

More than 100 residents attended a forum in Youngstown on the state’s recently passed gun laws.

Morinello said the state’s latest anticrime initiatives following the shooting at a Buffalo Tops, and a recent Supreme Court decision became a politically motivated issue in Albany this past summer. He went to list some of the impacts recently passed gun measures now have on shooting-related activities.

“They ban Boy Scouts from getting shooting merit badges; you cannot legally possess in a sensitive place,” Morinello said. “At Fort Niagara, they changed the definition for rifles and shotguns … including muzzle loading. Any reeenactor (as of Sept. 1) who brought their muzzleloader for reenactment (has now) committed a felony under New York state law.

“Where we’re going with this is, they’re taking over. They’re eroding the Second Amendment.”

“Now, you have to have 16 hours of safety training (versus four hours previously),” he said. “You have to (provide) social media (information) – your last three years of it; you have to do two hours of live-fire training. They (New York state) want to discourage people from exercising their right.”

“It’s a spiteful law, and it’s a kick in the pants for each and every citizen here in Niagara County and New York state,” he said. “We have 200,000 residents (and) 40,000 pistol permitholders in Niagara County. There’s less than 2% of them that is not concealed carry.”

Myers said the forum will offer women in the county, regardless of party, an opportunity to make their views known.

“No one thinks of the attack on the Second Amendment as a woman’s issue, yet half of all new gun purchases are made by women,” Myers said. “The issues we are discussing have a tremendous impact on women, and I am looking forward to the conversation.”

The free event, which is expected to feature a number of guest speakers, will take place from 5:30-7:30 p.m. at the Shawnee Volunteer Fire Co., 3747, Lockport Road in Sanborn.