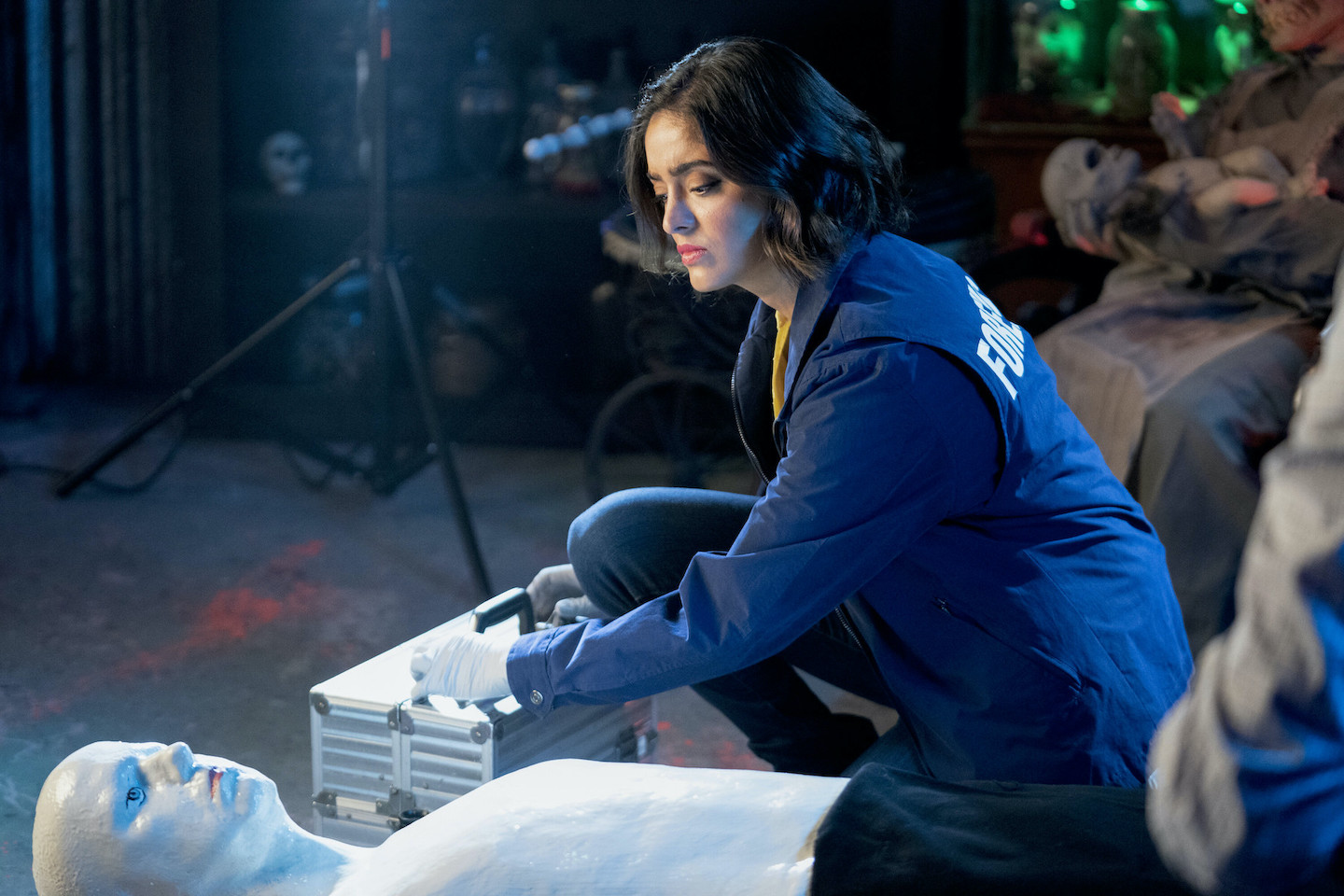 As Halloween descends on Sin City, the CSIs investigate when a creepy mannequin prop inside a popular haunted house turns out to be a real dead body. Also, Catherine enlists the help of Folsom to search for her friend who disappeared in the "The Painted Man" episode of the CBS Original series "CSI: Vegas." It airs Thursday, Oct. 6 (10 p.m. ET/PT), on the CBS Television Network, and will be available to stream live and on demand on Paramount+. Pictured is Mandeep Dhillon as Allie Rajan. (CBS photo by Erik Voake/©2022 CBS Broadcasting Inc. All rights reserved.)

When CBS debuted “CSI: Vegas” last season, part of the appeal was that the show was bringing back original “CSI” stars William Petersen (Gil Grissom) and Jorja Fox (Sara Sidle). While that caught the attention of both hardcore fans and casual channel-flippers, it was the new cast members who made the iconic franchise feel fresh and fun.

Paula Newsome’s Maxine Roby bucked the trend of gritty, hard-nosed, you-know-they’re-turning-heel officers in charge, instead presenting herself as a chill, confident, supportive boss. Matt Lauria’s Josh Folsom has every bit of Gil’s curiosity and intellect – and Sara’s Zen and determination. The star of the lab is Mandeep Dhillon’s Allie Rajan, an archaeology and forensics prodigy who's also a stud in the field. She loves Dunkin Donuts and Carrie Underwood … and possibly Folsom, too.

Allie and Josh artfully danced around that question over the course of 10 episodes – you know, in between processing bodies in all states of gooiness. Their will-they-or-won’t-they moments were interesting to watch, without being overly saccharine or detracting from the murder mysteries.

None of the four are expected to return for season two. However, Marg Helgenberger is reprising her “CSI” role as Catherine Willows.

Now a casino owner (via inheritance), and away from the action for several years, Catherine unexpectedly returns to the crime lab – and plays a key role in reuniting the new cast members in the season premiere. Her life in Las Vegas will be a central storyline.

There’s also the matter of a symbol-signing serial killer who was teased in the final moments of the season one finale.

Dhillon shared more in a Q&A with BTS. The British actor, who has comedic roots (including two projects with Ricky Gervais) and Jedi prowess (she appeared in “Star Wars: Episode IX – The Rise of Skywalker”), is getting a kick out of getting down and dirty with the “CSI” sets.

She also wouldn't mind a taste of Buffalo’s famed winter. Calling from L.A., where the weather was “boiling,” she said, “I bet you're able to wear like a nice jacket and jumper. I miss that. … I feel like winter clothes – you can just do so much more, fashionwise, when it comes to winter and fall than the summer.”

Q: You never know if a reboot will work – even if it is one of CBS’ most iconic franchises. Compare the feelings you had going into season one with those of season two, now knowing the show is a hit and the fans really like it.

Mandeep Dhillon: It's interesting, because my feelings haven't changed (laughs). When I got the job, I didn't really know what I was walking into – with the scale of it – if I’m honest. I didn't watch in the U.K. It's not something that I was aware of. I've heard of it, but I didn’t realize the scale of it. So, I sort of walked into it blindly. And didn't really even put much on the fact that it was a reboot. … I'm one of those people that what’s meant to be will be. There's no point living in fear. Just walk in, do a great job, have fun and whatever.

I definitely notice other people are more relaxed this year (laughs). And it's funny, I only realize that now, because I can compare it to last year. And now I'm like, “Oh, yeah, everyone seems to be more (relaxed).” There's no execs, really, on set that often anymore. We're just, we're in it. I think that's something different. The higher powers are probably just a bit more relaxed. But me, I'm just still going to work every day having a great old time.

Q: So, having not watched the show – as you said, coming into this fresh – tell me about your character, and what was the initial appeal for you in this role?

Mandeep Dhillon: Well, Allie, she's so smart. She's sassy. She is such a well-rounded character. She's so brave. She's living in Vegas alone. She doesn't have family. She's, in season two, she’s just broken up with her boyfriend. That's where you sort of meet her.

I think she's a very strong person, and she's a strong representation of a woman. And that was something that I was like, “Ah, that's dope. I'm happy to portray that.” And she’s $hit hot at her job.

Q: That brings me to my next question. Because she is brilliant – and she can find the smallest details in the most obscure places. So, how is it that she can't tell that Josh has a thing for her?

Q: Partners, friends, something more. I’m sure it’s up to the writers and the showrunners. … But do you have a preference?

You know what's been really fun is playing different versions of them. We’ve played friends. At the moment, we're sort of doing … like a little bit of a love triangle thing happening, when we start this series off. It's like, “Oh, $hit”; she gets back from L.A .and is shocked to see that someone is in his life.

So, that’s been really fun to play. And I think down the line, whenever they – if they ever – end up getting together, that will be also fun to play. But I'm quite happy for the writers to (keep this going).

Until we get a chance to play together, I won't be able to know what one I prefer. 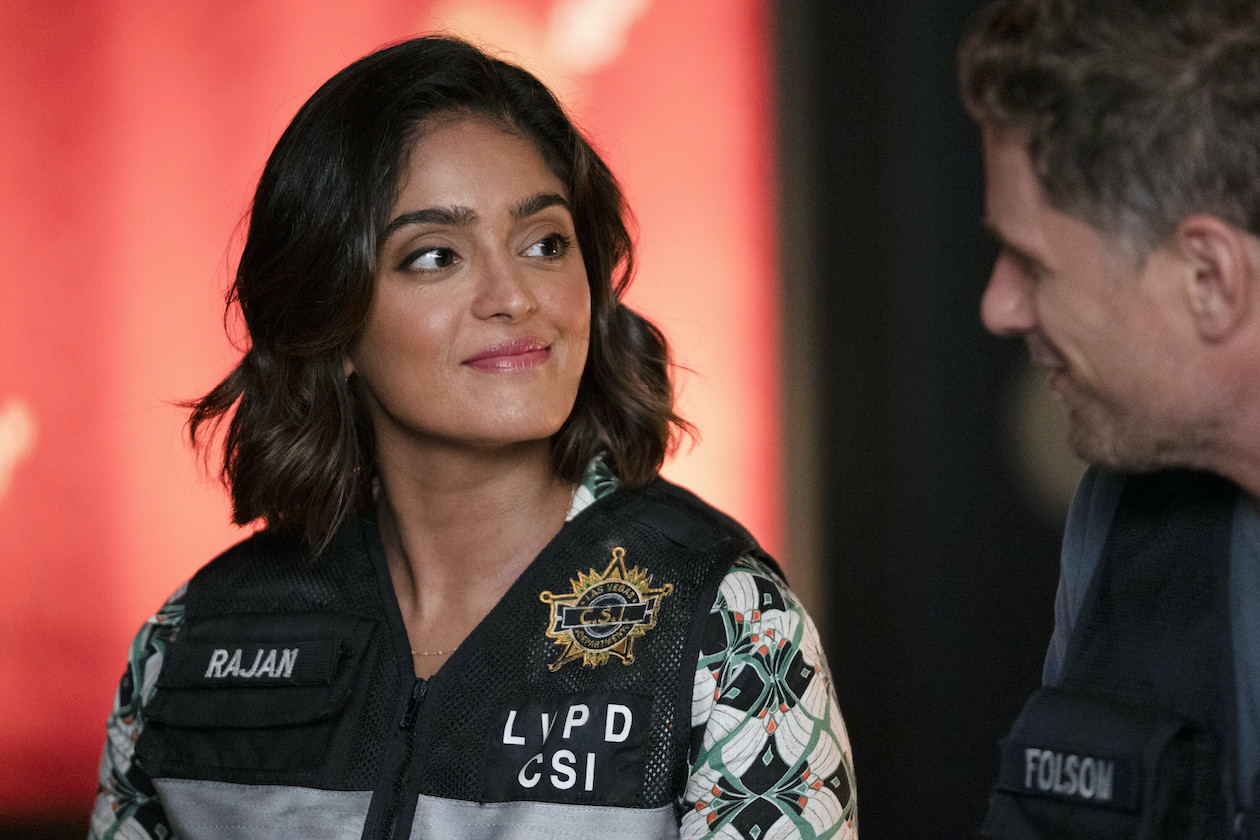 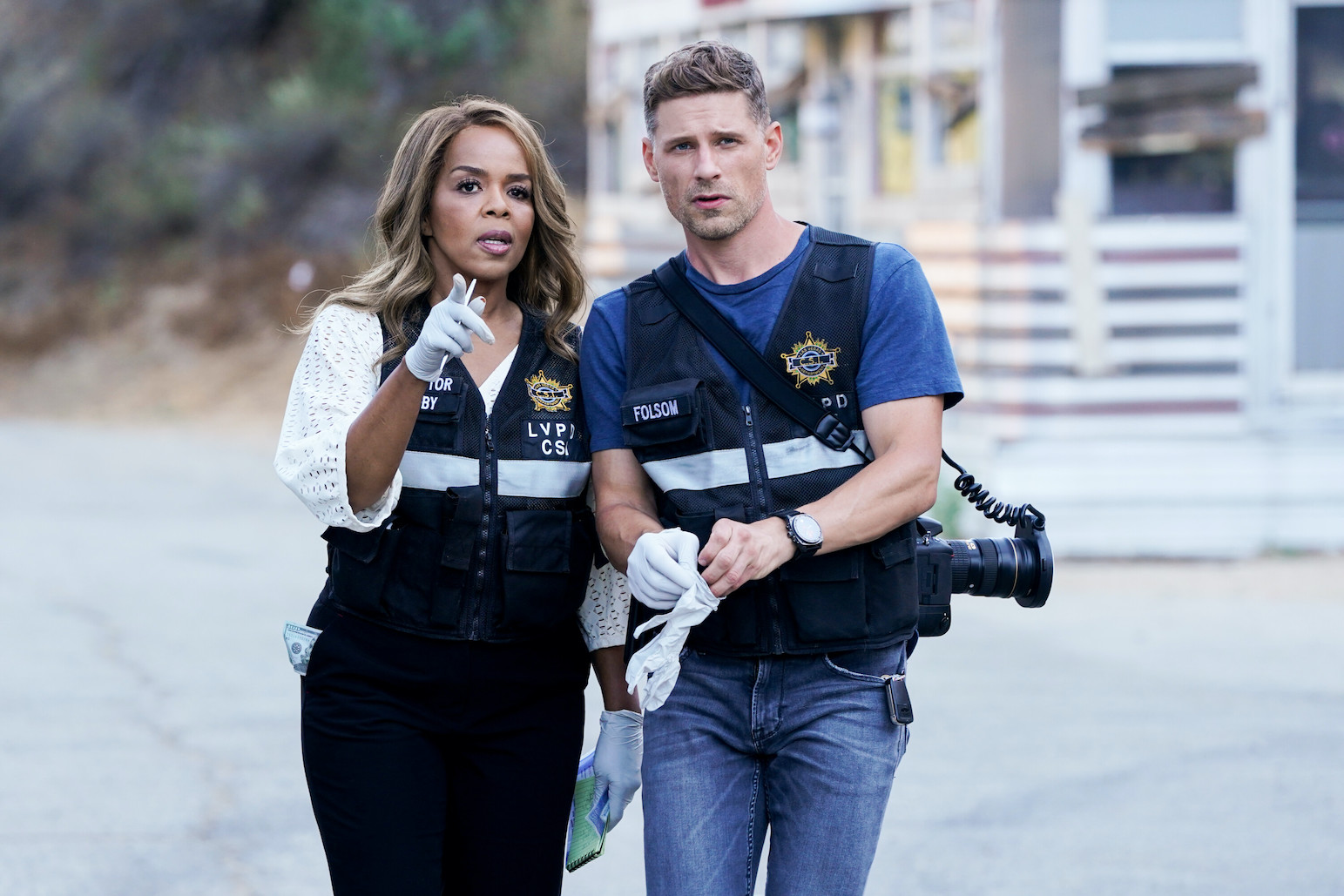 “Story of a Gun” – The CSI team investigates after a group of teens discover a dead woman behind the wheel of an abandoned car in a Nevada ghost town on “CSI: Vegas,” Thursday, Oct. 13, on the CBS Television Network. Pictured: Paula Newsome as Maxine Roby and Matt Lauria as Josh Folsom. (CBS photo by Sonja Flemming/©2022 CBS Broadcasting Inc. All rights reserved.)

Q: William and Jorja were great in season one; I’m sure they would’ve been great in season two, as well. So, no shade on them at all – but, personally, I kind of like the fact that the series is almost rotating past cast members in and out, instead of just bringing the whole gang back and focusing on them. I really like what you and Matt and Paula bring to the table, and that these are new stories – that they’re not just rehashing the old series. What is your take on building something new while also honoring the show’s past?

Mandeep Dhillon: I think it’s the perfect way to do something like that. I think, if I had created a show – and it had run for so many seasons, and then we wanted to bring it back – I think that would be the perfect thing. You do it with fresh characters, but then you pay your respects, and also give the audience what they want.

The fact that we've got Marg back – Marg as a person is f-cking amazing. Amazing. She's so talented, but she's also so much fun, and such a wonderful person. So, that's been a real joy to get to know her and work with her. 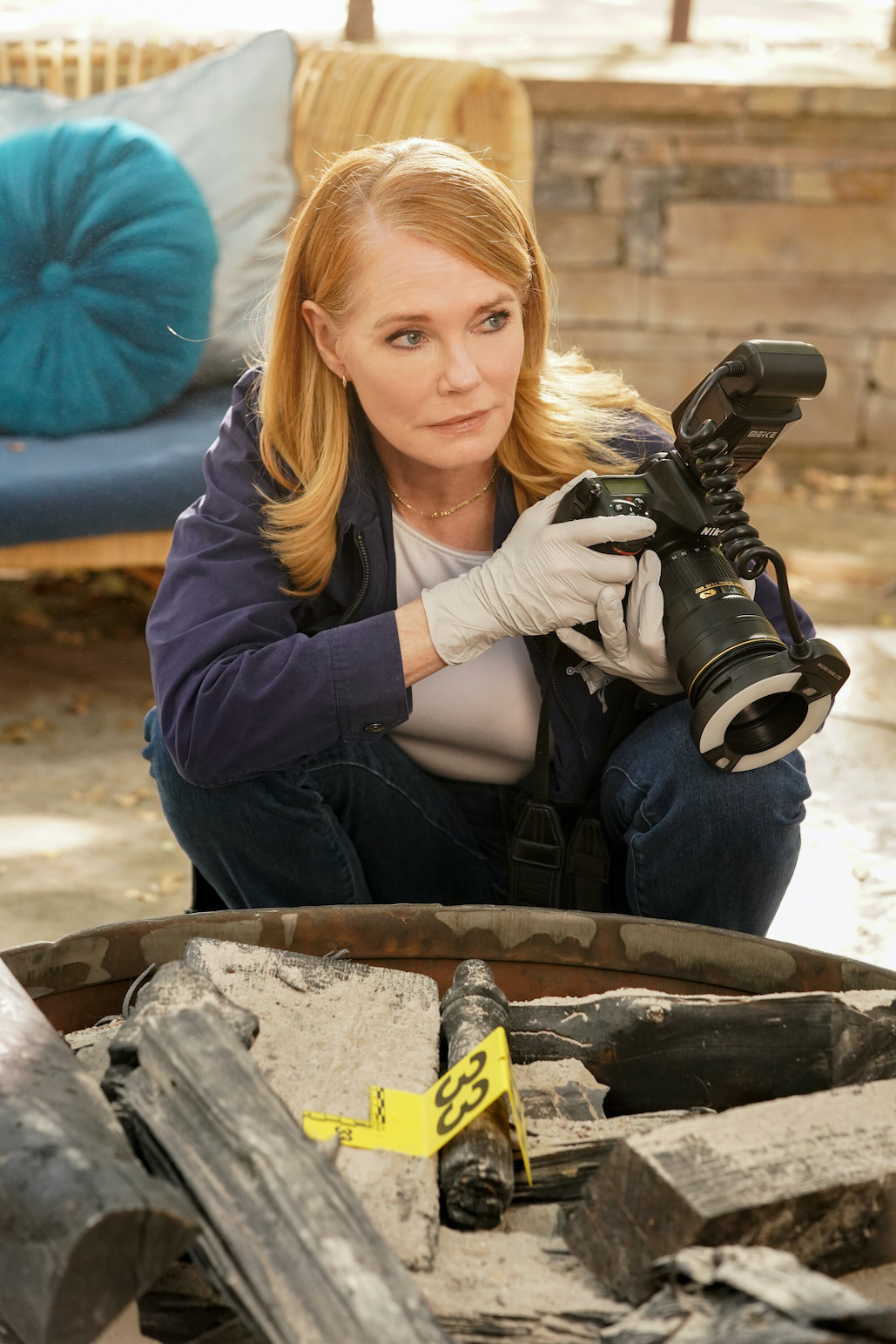 Q: You mentioned Marg as a person. Tell me about her character, Catherine, and what role she's going to play in assisting the lab.

Mandeep Dhillon: Catherine is a bad boss bitch, is what I like to call her (laughs). She's just fiery. She's fiery. She gets $hit done. She has sort of a similar upbringing and background to Josh's character, Folsom, because they've come from a bit of a rougher background. And it shows in her fires; Catherine’s got a fire to her.

And actually, I think what the writers have done introducing Marg back in, and the reasons as to why she's there, and how she helps with the lab, is amazing, actually. And that is sort of a story that I think it's what is wonderful about this season two. Like fair enough, you've got your weekly case. But there's a beautiful and gripping over-arcing story of the whole season.

And they didn't really used to do that each season, like back in the day – so I've heard. We didn't really do it that much last year, either. But it's nice to have that, because I think it brings people. You want to know what is going on. And she's definitely part of that over-arcing story.

Q: Oh, I'm sure I will. And I agree with you: I like when there is a season-long storyline in addition to what they call the “case of the week.” But I do know your showrunners have said that there will be more sort of one-offs with the cases, because they want to focus on the fact that Las Vegas is Las Vegas, and it's weird and wild and wacky and wonderful. What can you tease about some of the more unusual cases we might be seeing in the first couple of episodes?

Mandeep Dhillon: I got to have so much fun in episode two. It's called “The Painted Man.”

A dead man shows up painted in this haunted horror house thing. And that was fascinating; that death, in general, and disgusting, as well. But what I loved working with a certain actor on the episode, his character's name is Jean, and it was so great to work with him. Allie really gets to get her teeth sunk into a big case.

Yeah, that was fun, this one. That was exciting. I really enjoyed that.

I mean, to be fair with you, the deaths, on every episode, I read the script, and I'm like, “This is awful.” And then I see the effects team and what they've done. And again, I'm like, “This is disgusting. What are you doing?” Which they like. They’re like, “Great. We've done our job” (laughs). 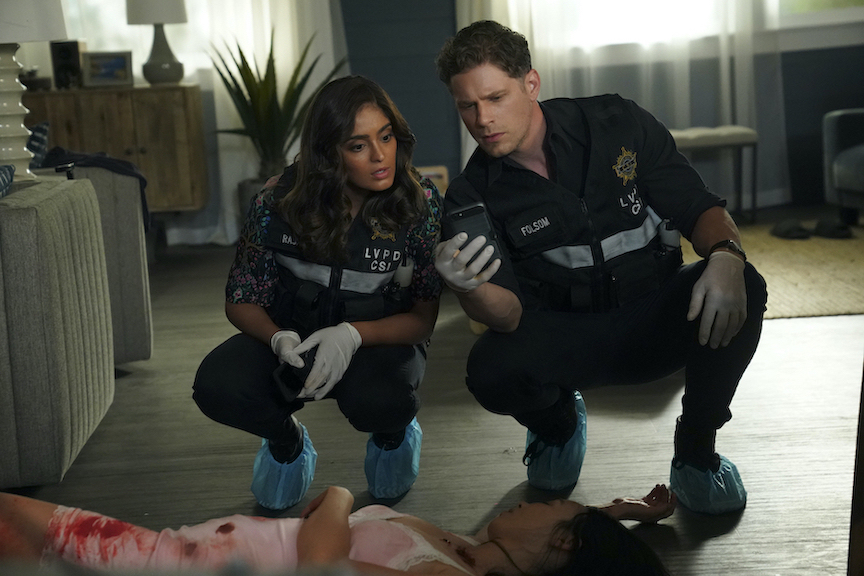