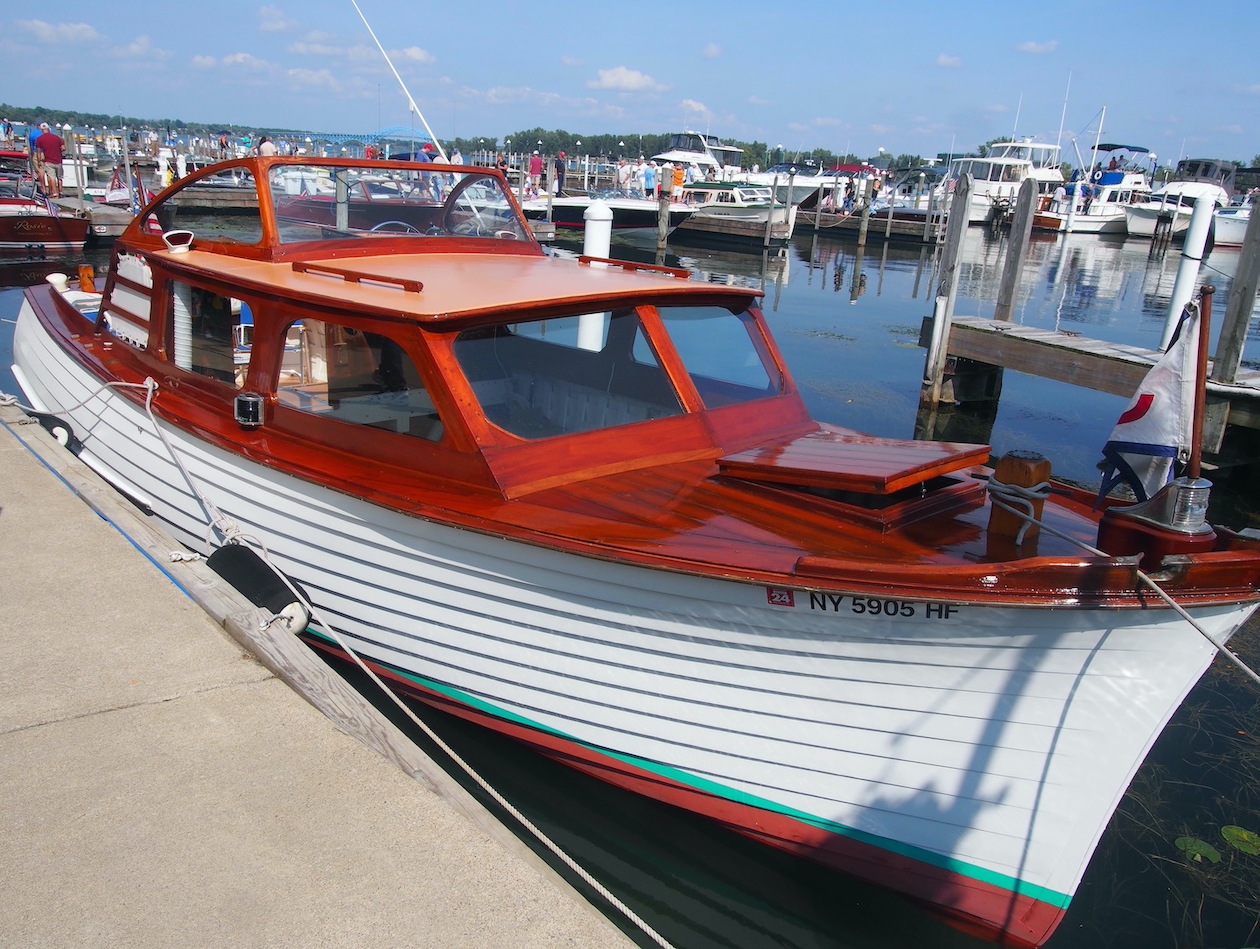 The Starling IV, a 70-year-old Sea Bright skiff, fell in disrepair. It has been reconstructed for the past five years and is still a work in progress, says its owner, Phil Sullivan.

One smashed bottle of Sparking Bouverie was all it took for the Starling IV, a sea bright skiff, to be rechristened at the Niagara Frontier Antique and Classic Boats Inc.’s 43rd annual antique and classic boat show on Sept. 17 at the Buffalo Launch Club.

The boat’s current owners, Phil and Liz Sullivan, wanted to recreate the original christening that occurred 70 years ago, when the same type of sparkling French wine was smashed against the bow of the boat. His grandfather, Philip Sullivan, had commissioned prominent yacht designer and builder Fred Lawley of Quincy, Massachusetts, to design and construct this boat, the fourth in a series of boats, all called Starling. The boat was built in a family boatyard in Braintree in 1952. The boat was christened in 1953.

“It was actually the fifth boat that was designed and built for my grandfather,” Sullivan said at a presentation during the show. “I guess you could say he’s my namesake. He was born in 1874, died in 1952. Unfortunately, he never saw the boat built to completion. His wife was Rose Marie. I never met these grandparents. They died well before I was born (in 1959).”

Although Sullivan never met his grandfather, he heard the stories about him. “He was a colorful character, the oldest of four boys, a wild ass, who drove his mother nuts. He was also a genius.”

All but one of the previous boats, the Rose Marie, were named “Starling.” The first three Starlings were designed and built by boat builder George Loring in Braintree.

“Starling II was a 45-foot motor yacht,” Sullivan said. “It was powered by a Sterling engine made right here in Buffalo. They were always proud to have a Sterling engine. This was the boat that my dad grew up on. The Sullivan burgee (flag on boat) flying on the forward mast. They spent their summers at Martha’s Vineyard and Cape Cod. So, here we are in 1942. World War II had just started, and my grandfather’s big yacht, the Starling III, a 50-foot motor yacht that he had designed and built by George Loring in East Braintree. It had twin Chrysler Royal engines in it. My dad did a lot of work with the engines and stuff.”

But, with World War II, “the Navy and Coast Guard were in dire need of patrol boats,” Sullivan said. President Franklin Delano Roosevelt established the War Shipping Administration on Feb. 7, 1942.

“Anything that floated, anything you could mount a machine gun on and stuff like that, they took by eminent domain,” Sullivan said. “They came in and said, ‘You have a nice-looking boat. We can use that. Here’s some money for it. Thank you very much.” And they took it away.”

After the war ended, the government offered to return the boats but, by then, Sullivan’s grandfather no longer wanted those boats. By June of 1945, both the Starling II and the Starling III were offered for sale.

Unfortunately, by the 1970s, the Sterling IV fell into disrepair and “went out of his family for some time, but they did get it back,” said Sharon Dickinson, chair of the event.

For the past five years, Sullivan and his two brothers, Tom and Rich (who died in May after a battle with pancreatic cancer), worked together on the reconstruction of the boat.

It was a huge project and, after five years, it’s still ongoing, Sullivan said. “I worked on this boat as a kid. But, anyways, the boat was in much worse shape than I thought. Take your initial estimates for time. I predicted that I was going to be done in three years. If you’ve seen the boat, it’s a work in progress, and I think that’s kind of cool. I’m going to use it in the summer and work on it in the winter. I still have a lot more to do.

Many other boats were on display at the show, including the Custom Craft boats, built in Buffalo; the Cayugas, which were built in Cheektowaga; and the Chris-Craft boats, which were first built 100 years ago, Dickinson said, noting she was enjoying the show. “I think we’ve got some good exhibits. The boats are nice and pretty, on land and in the water. The weather is great. We couldn’t ask for anything more, and it’s not windy.”

Board of directors member Rocky Nagel said, “We get all different kinds of boats together. These boats come from Western New York, Southern Ontario, and the Finger Lakes region. Sometimes, they are from New England, Pennsylvania, Ohio. We get boats from all over, and it’s fun.”

Nagel was exhibiting his boat, a 1956 Century Coronado called the Miss-LED.

“This boat was owned by the family that originally owned the Iroquois Brewing Co. in Buffalo,” he said. “They bought it new in 1956. I learned how to waterski on that boat. The name, Miss-LED, is named after their three daughters, which was Lynn, Elaine and Donna. Hence the Miss-LED. So, I bought this boat in 1982. I’ve owned it for the last 40 years.

“We’ve done some work to it. We’ve redone it in the original color scheme of turquoise and teal. We use it all the time. We keep it in the water. We keep it up in Rich Marina (Austin Street, Buffalo), and we take it out as often as we can. It’s been a great boat. Coming to shows like this is fun because you get to see everybody who has the same hobby.”

During the winter, he participates in boat restoration workshops at the Buffalo Maritime Center. Workshop topics include engine maintenance, varnishing and wood maintenance.

“It’s a great wintertime activity. We go over every Tuesday night. We have a great time,” he said.

One of the boats on display on land was a skiff, designed and built by the Buffalo Maritime Center.

Carol Alt, a kayaker for the past 20 years, said, “I voted for it. I would feel very safe in this.”

Alt, who owns hand-built wooden kayak, said she has kayaked in many places, including the Niagara River, the Everglades in Florida “with the alligators, and under the mangroves in Sarasota Bay.”

“I have a cottage in Muskoka, Ontario, and I kayak there. My favorite place to kayak is the calm bay under the mangroves, where I can meditate,” Alt said. “To paddle in a mangrove is so peaceful.”

Some of the boats on display were too small for a human crew.

John Marck of Thorold, Ontario, came to display his model boats as part of a display by the Buffalo Model Boat Club. He said that, as a boy, he built model cars, boats and airplanes from kits.

“I had an experience with wooden boats I looked after as a teenager up north for an American, who had a bunch of boats,” Marck said. “I was the boat boy. He had a couple of Chris-Crafts. It was my job to keep them fueled and pumped and polished and cleaned and whatever. I sort of had an interest in that, and then life went on.

“Many, many, many years later, I saw that you could get a kit. It was the most beautiful runabout that I’d ever seen in my life. I didn’t buy that first. I bought a simpler wooden model kit, that I did. It was a racing runabout. I started out there just to get used to handling what it takes to make a model. From there, I never looked back. I build as many for other people as I do for myself. I’ve probably built 25-30 boats like this. I have 13 or 14 at home now, and I’m constantly working on either one for myself or one for somebody else.”

Marck said building model boats has been a fulfilling hobby for him. What makes him happiest, he said, is “seeing the finished result, I guess. There is a challenge in how you’re going to do something, especially if it’s custom stuff. You have to figure out how you’re going to do it. That’s very rewarding when, all of a sudden, you get that light bulb. ‘Oh! I could do this!’ That’s good, especially when it works. And you’re thinking, ‘I know what I can do to fix this!’ I’ve had to fix stuff, too. I’ve had disasters. You just suck it up and don’t get discouraged.”

In addition to the boats on display, there was a car show, featuring about 85 classic and antique cars.