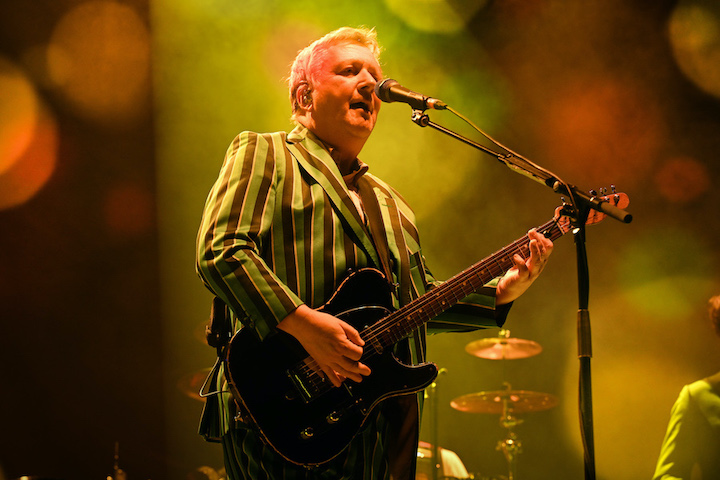 Glenn Tilbrook of Squeeze to perform at Town Ballroom

Glenn Tilbrook has no shortage of songs he can perform on stage when touring. He has hits crafted by himself and Chris Difford in their ’80s band Squeeze (including “Tempted,” “Take Me I’m Yours,” “Pulling Mussels From A Shell,” “Up The Junction” and “Black Coffee In Bed”), as well as solo selections from albums “The Incomplete Glenn Tilbrook,” “Transatlantic Ping-Pong” and “Pandemonium Ensues.”

But what really excites Tilbrook is not knowing what might come out of his mouth next.

“It's just all depends on what happens on that particular night,” he said during a recent phone interview. “You know, I always want to expand what I'm doing. It's very tempting to fall into the railroad tracks of stuff that I know very well. And there will be some of that. But, you know, I think it's the mix of known and unknown that makes the shows so interesting and positive for an audience; because I think I can see that I may not always be entirely comfortable. That gives the shows a certain edge.”

To that end, the singer is not above taking impromptu audience requests – for just about anything.

Tilbrook will bring his unique performing approach to Buffalo when he takes the Town Ballroom stage on Sept. 16.

The London native shared more in this edited Q&A.

Q: Your team tells me this is your first solo tour of the states in quite some time. What made this the right time – and what excites you about it?

Glenn Tilbrook: Well, you know, I miss it when I'm not touring by myself. I absolutely adore touring with Squeeze, and we've done a lot of that. We managed to do shows with Hall & Oates and by ourselves last year; and that was like magic happening, to be in the states. I was there from August until the end of November. And you know, there's all the COVID stuff lying about. All that, and we managed to get through all the shows while tours are being canceled around us left, right and center. They were pretty strict on that tour, and we made it through.

It was such a glorious relief to be able to play to people; and to feel that connection with people – and seeing people's faces after everything everyone had been through – was really fantastic.

And I still feel it's the same way now. We've been through a tremendously weird time. I’m not suggesting we’re out of the woods, but we're definitely out the other side. And it's great to be there.

Glenn Tilbrook: Well, they'll be kind of a “Play That Funky Music, White Boy,” which I've never played. And so you think, “Well, is that going to be completely out of my realm? Is this going to be fun? Or is it going to be humiliating?” (Laughs) And I have to decide on the spot what that's going to be like.

I did get a request for “Harper Valley P.T.A.” last night. And I did it; and I managed to remember all the words – which was not at all apparent when I started singing the song. That is a sense of triumph. …

It's like lightning can strike when I'm on stage, because sometimes brilliant things happen. And the audience go with me.

Q: I'm wondering, with regard to the songs you did with Squeeze, you know, certainly, music has changed a lot since then. Society, culture – things in your own life have changed. And you've played these songs more than a few times. Does the changing of the times – does whatever you're going through – good or bad – in any particular season of your own life – does that at all influence how you approach those songs? Does it influence how you think about those words, those lyrics; or do you go back to the place you were when you first heard them, when you first were performing them?

Of course, things change. I think 99% of Squeeze songs I see as snapshots of time – and a lot of that time is long gone. And I felt proud to represent it for the way it was then, because I think the picture of it was pretty true at the time.

For our experience anyway, which is, you know, working class, or as you’d say, blue collar, South London, it was a bit like the wild west then (laughs). It really was. It was quite reasonably poor, and sometimes a dangerous place. I'm not over-romanticizing, by the way. It just was. But that was where we grew up. That's what we knew. That's what Chris wrote about, and he did it very well.

Q: The first time I was introduced to your music was through the “Reality Bites” soundtrack. Of course, a very seminal movie in the states – and for me at the time, when I was in college listening. Your songs have appeared so many different places over the years. Is there a particular placement – and maybe it's that one – that stands out to you – that you thought, “Wow, that's really cool they included our music”?

Glenn Tilbrook: Yeah. … Certainly, in terms of my older kids, what got me really cool brownie points was when we were in two episodes of “Breaking Bad” (laughs).