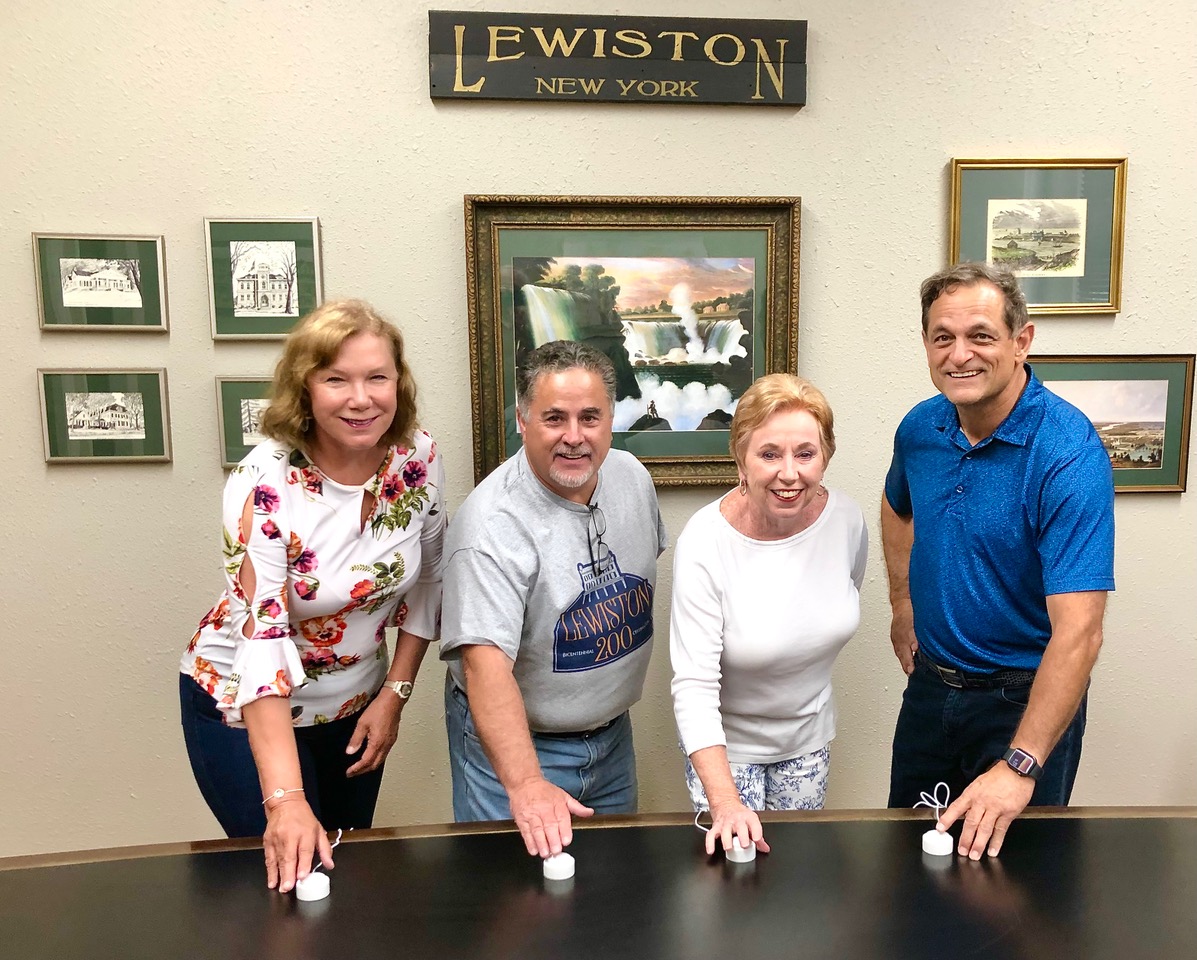 The Historical Association of Lewiston has announced this year's "Lewiston Jeopardy" team captains for the annual tournament. From left: Sandy Blackwell Yates, Peter Coppins, Anne Welch and Curt Stuart. The contest, which features both team competition and participation from the general audience, will take place at the Brickyard Brewing Company at 6:30 p.m. Thursday, Sept. 15. Reservations are $45 per person and can be obtained by calling the Lewiston Museum at 716-754-4214.

This year’s “Lewiston Jeopardy” team captains practiced their buzzer skills recently in a show of support for the Historical Association of Lewiston. The popular “beer and pizza night” tournament is scheduled for 6:30 p.m. Thursday, Sept. 15, at the Brickyard Brewing Company, 436 Center St.

The “fun”draising event is open to the public. Tickets, priced at $45, can be purchased over the phone at 716-754-4214. Early reservations are encouraged, because volunteer organizers expect a full house this year.

The contest features clues about local culture, history and all things Lewiston and Western New York. In addition to the general audience participation, a portion of the contest will showcase four teams competing for trophies and bragging rights. The contestants come from diverse backgrounds and bring over 700 years of combined Lewiston experience to the event. Organizers said each is recognized for a love of Lewiston and in-depth knowledge about the area's past and present.

“They have been involved in numerous civic endeavors and have proven their ‘street cred’ in working to make Lewiston one of the best small towns in America.”

The two-time undefeated champion, Sandy Blackwell Yates, will lead a team sponsored by Lund Leather. She will be joined by Ralph Borelli and Tim Miller.

Blackwell Yates said, "Lady Luck can be fickle. Once again, it can all boil down to the final ‘Jeopardy’ clue. It will be very exciting to see what fate has in store.”

Vying for the top spot will be Village of Lewiston Mayor Anne Welch's team. She will be joined by her colleagues, Deputy Mayor Victor Eydt and Historian Russ Piper.

Welch said, "This is one of Lewiston's great events, filled with twists, turns and surprises. We look forward to another evening of friendly and lively competition. We encourage everyone to come out and enjoy the fun.”

Long-time businessman Curt Stuart of Stuart Sports will be sponsoring and leading a team composed of Michael Vitch and former Clerk Amy Salada.

He said, “No one can give wrong answers faster than we can, but at least we’ll be wearing clean shirts. Get those buzzers ready!”

Lifelong resident Peter Coppins is heading up a new team called “North of Center” and will be joined by Daniel Gibson and Bill McEvoy. Each of the team members live in the village, north of Center Street.

Coppins said, “We don’t have a strategy but, while the other teams are beating each other up, we’ll be enjoying our beer and pizza. That will give us a chance to come from behind and prevail.”

The evening will also highlight annual awards, raffles and auctions.