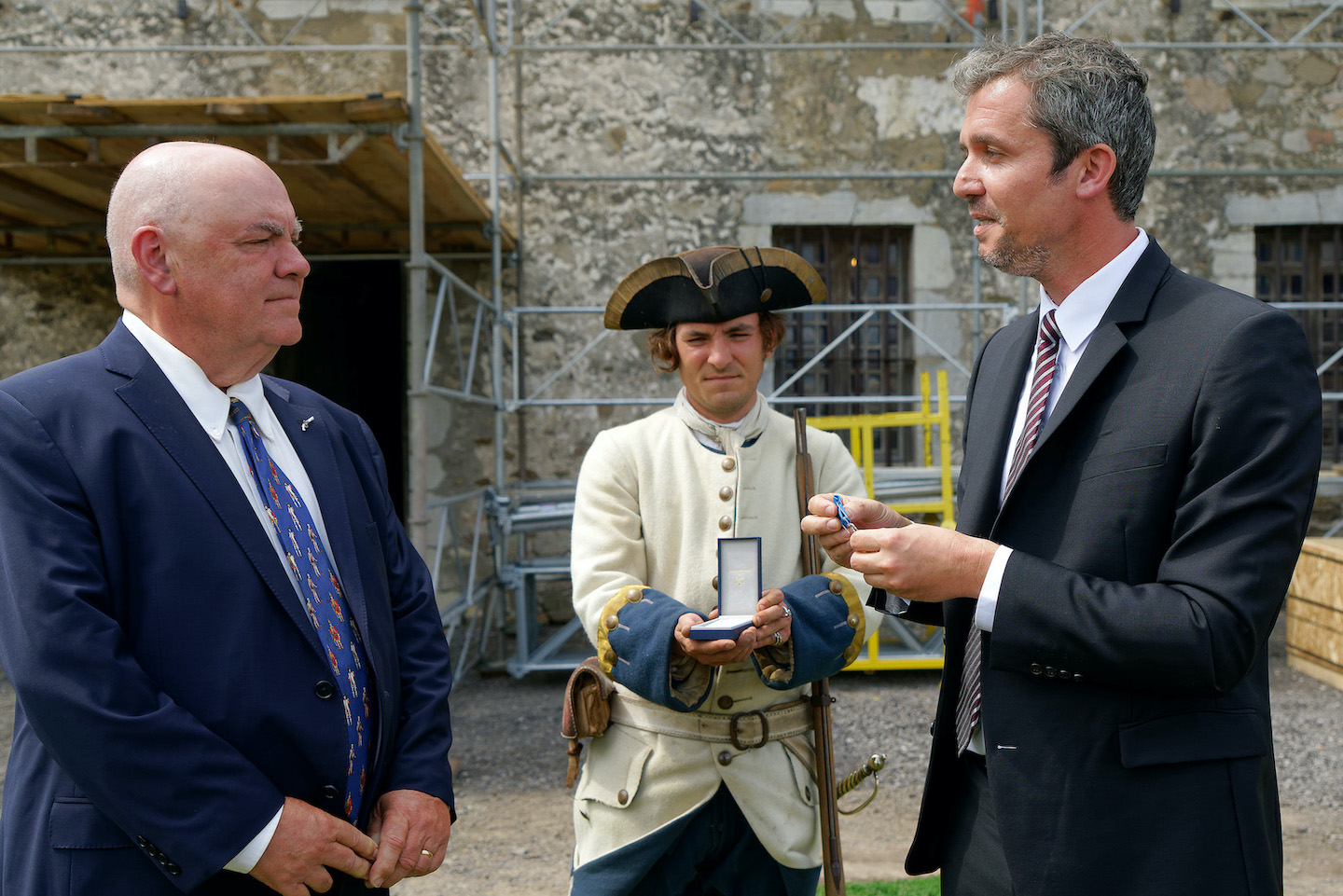 French Consul General Jeremie Robert presented Robert Emerson, executive director of Old Fort Niagara, the Ordre National Du Merite, or National Order of Merit. This award is in recognition of Emerson's work to preserve the French heritage at the fort during his 26 years of service there.

July was an exciting month for Old Fort Niagara and Executive Director Robert Emerson, as all aspects of OFN’s functions were acknowledged.

On July 27, Old Fort Niagara received two grants for a total of $150,000. One grant of $75,000 came from Parks and Tails New York, a nonprofit organization; and the second, for an equal amount, came from the Niagara Greenway. These two grants are to repair the North and South Redoubts built by the British in 1770 and 1771. The building’s design incorporates both Georgian and Asian architecture, which was a popular design at the time. Both of these buildings were actively involved in the War of 1812.

On July 28, Emerson was awarded the Ordre National Du Merite (National Order of Merit) by French General Counsel Jeremie Robert for his work in preserving history at Fort Niagara and the area for the past 26 years. Being awarded the French Merite badge is a huge honor for Emerson, and signifies French-American friendship.

Old Fort Niagara has a long history, with its grounds occupied over time by the French, British and the United States. The fort has withstood the French and Indian War, Revolutionary War and the War of 1812. The buildings occupying the fort grounds today are original and among the oldest on Lake Ontario, with the French Castle built by the French in 1726 and the “newest” building being the brick wall/casemates, started during the Civil War in 1863. 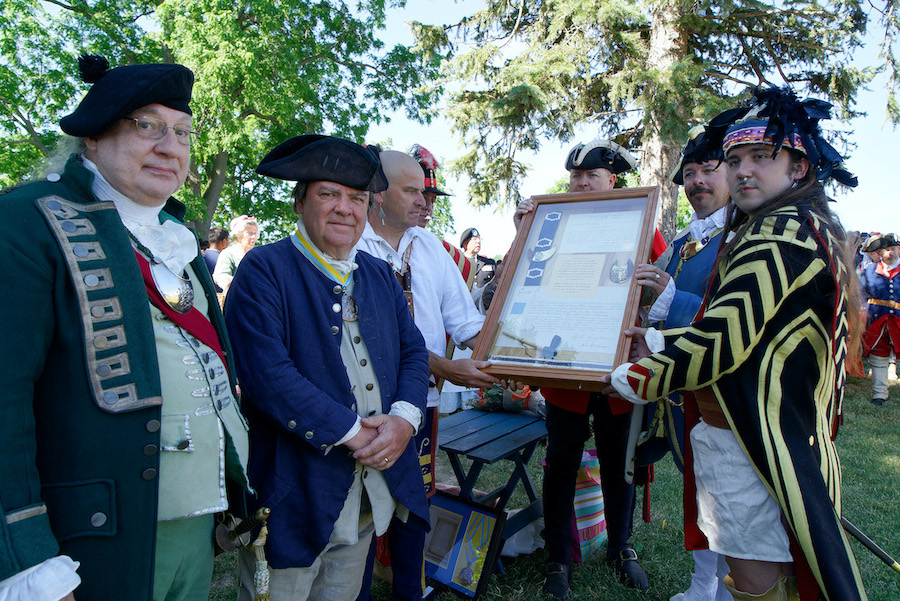 Today, Old Fort Niagara has two major functions. The first is to tell the story of the fort and the people who occupied it during nearly 300 years. This is done through outreach to schools, and reenactments of period military life and battles – including the French and Indian War, Revolutionary War, War of 1812 reenactments, as well as special events such as “Soldiers through the Ages” and French Day, to name a few. These events are presented by a group of dedicated staff and volunteers.

The second is to preserve and maintain the important buildings and grounds. Both are equally important.

Emerson has been successful in both telling the history/story of Fort Niagara, and in taking care of these important, historical buildings and grounds.

He has served as the executive director of Old Fort Niagara since 1996. During that time, Emerson and his family have been actually involved in telling the story and safeguarding the site. He has developed programs, hosted reenactments, written numerous papers, and developed a knowledgeable staff.

Emerson has also worked tirelessly to receive grants to aid both in programs and maintaining the buildings.

This year, more than 600 reenacts took part in the event. Emerson was presented a commemorative shadowbox and a $3,000 donation to the Fort in his honor. His wife, Kate, was honored with a beautiful reproduction glass vase and 26 roses. Children Will and Suzannah were honored for their lifelong involvement at the Fort.

Both recognitions Emerson received were well deserved. To see the results of Emerson’s work, and learn some French, British and American history, come and visit Old Fort Niagara. 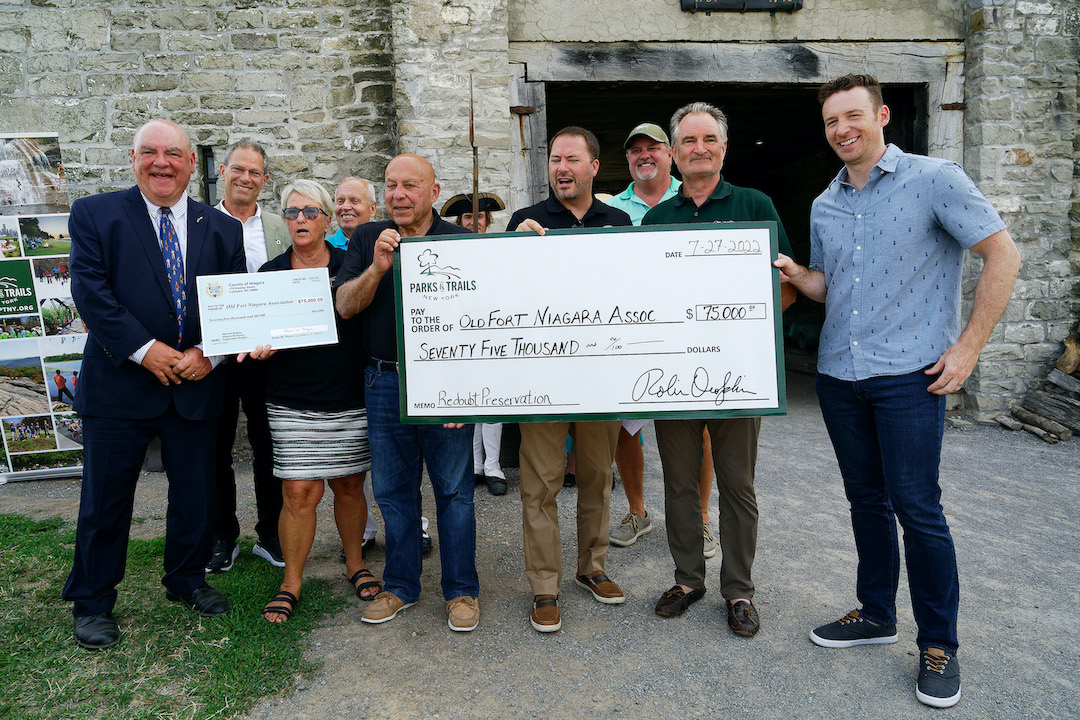 Emerson is pictured with state and local officials at the recent check presentation on the fort grounds. Old Fort Niagara was awarded $150,000 in funding from Parks & Trails New York for the Historical Structures Preservation Project.