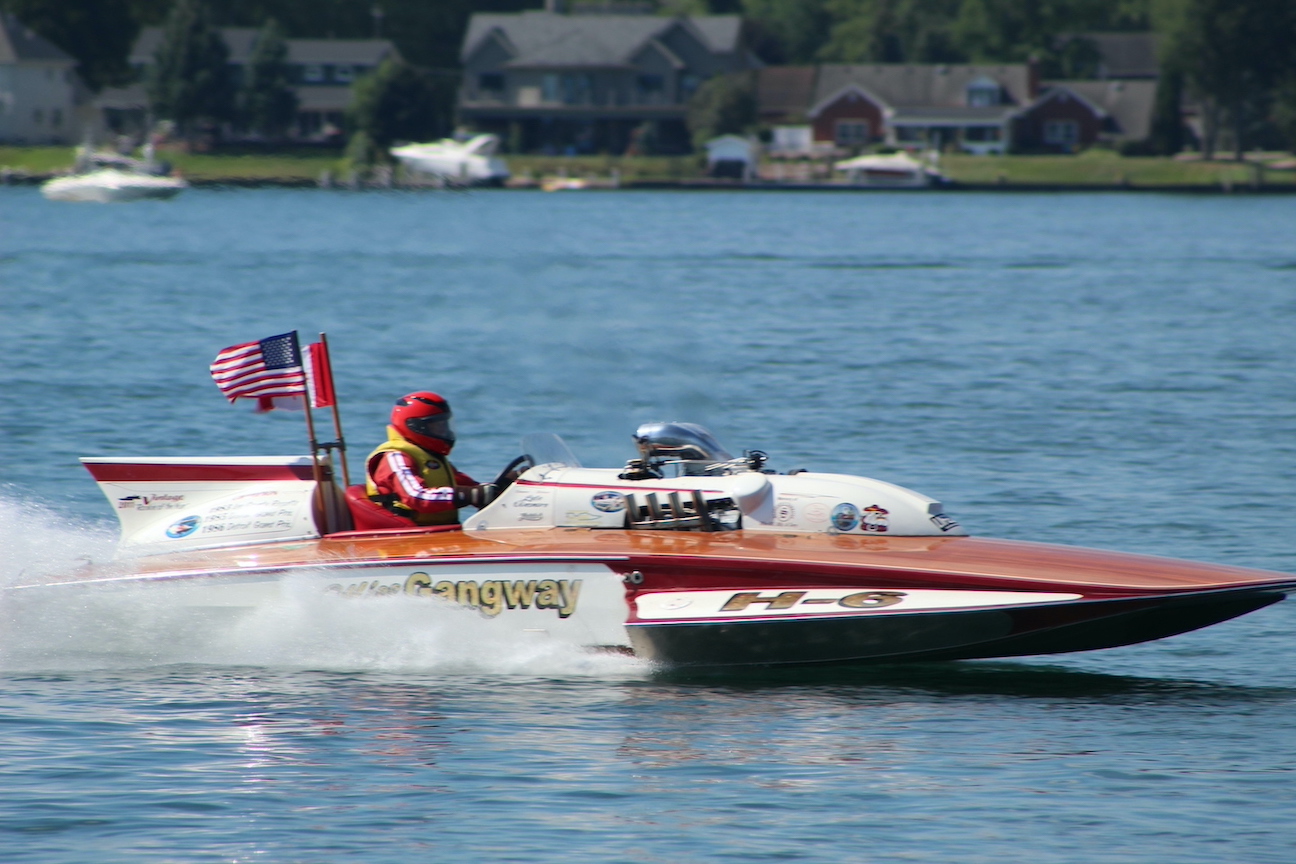 Lyle Dinsmore makes a pass in his vintage wooden hydroplane.

Man, machine and the 'Mighty Niagara'

Thunder on the Niagara returns after COVID pause

Story and photos By Nathan Keefe

The crowd roared as man and machine met on the mighty Niagara for the annual running of Thunder on the Niagara this past weekend at Gratwick Park in North Tonawanda.

“We had a good showing of what we call the Grand Island Navy, with some individuals from Grand Island that did extremely well,” said Gary Roesch, commodore of the Niagara Frontier Boat Racing Association.

Roesch, who chaired the event, said he was pleased with the big wins by racers with Grand Island connections who took first place in the H350 and Grand Prix class races.

Another proud moment for Grand Island at this year's Thunder on the Niagara was the opening act of Dinsmore driving his own vintage hydroplane, the Miss Gangway, out on the water. Dinsmore is the owner of LDC Construction.

Five hydroplanes come around turn four at the Thunder on the Niagara.

This year’s Thunder on the Niagara was called “The Legends’ Memorial” in honor of two legends on the hydroplane racing scene: Mike Endres and Ken Brody Sr.

Brodie lived on Grand Island for quite a while until moving to New Jersey. He broke the Grand Prix reliability record by making 12 straight events with 100% heat completion. He racked up 37 years of driving experience.

Endres, of Grand Island, was a third-generation racer, following in the footsteps of his grandfather and father, Roesch said. He was well-known in the sport as a race event leader, engine builder, crew chief and champion owner and driver.

“He was very instrumental in working with me as a co-chairman of the race for the last four years. And we miss both of those guys very much,” Roesch said.

He noted his satisfaction with the overall turnout of this year's event, which included a car show, food vendors and crafters.

“We are extremely pleased with the event in 2022,” Roesch said. “This is the first time that we’ve done anything since the pandemic. The last race that we had was August of 2019. We had on Saturday 16 heats of racing, and Sunday we had 14 heats of racing. We had over 50 boats, all the way from Florida to northern Quebec. We had a car show on Saturday that we had 200 cars. For the two days in attendance, I’m estimating we had over 5,000 people.”

He noted, “The Niagara Frontier Boat Racing Association is the local club that does all the physical work for the event. The Hydroplane Racing League and the American Power Boat Association is who actually sanctions the event.”

Ken and Jack Lupton came over here in their offseason from New Zealand to race with the Hydroplane Racing League. The two brought over two different hydroplanes this year, which they both raced in the Grand Prix Class.

“This is the pinnacle of the sport – the hydroplanes – that’s one of the top classes; so, that’s just what we’ve been brought up on,” he said. “We started both when we were very young and this is just what we know how to race, so we come and do it. We’ve got a good team with us and they work really hard. We just do the easy part – we jump in the boat and drive it.”

They said racing in New Zealand is almost the same as in America, with the same rules and types of boats.

The racing group the “Canadian boys” came in from Montreal this year to race and placed third overall. The group brought in one hydroplane this year, GP 757, to race in the Grand Prix class.

Claude Auclair is a crew chief for GP-757 Canada Boy, a 2.5-liter boat driven by Mario Blain. Auclair is from Montreal and races for the HRL (Hydroplane Racing League).

“This is a brand-new boat,” he said. “Our first race was at the Valleyfield this year, and now it’s the second weekend of racing. More and more, the rig … the T-shirt and everything we begin to look like NASCAR. Very fast – for GPs, mostly, it’s very technical, all the engines, the fine-tuning and everything … and now more and more, we have fans everywhere we go. It’s not like NASCAR, for sure, but slowly, safely, it’s very popular.”

There was an unusual twist in the Grand Prix that resulted in Tate’s win, even though he wasn’t the first to cross the finish line.

“The Grand Prix, actually the fellow that won it (Jack Lupton), he received a penalty for changing lane in the last turn,” he said. “In the final, he got a penalty of 20-some points, so he wound up fourth. Andrew Tate, who was in second, won the heat, and he got the 25 points for the win.”

Robin Demers, co-pilot of GP 757, came in second. Through the point system, Ken Brodie wound up getting third.

“Even though, in the final heat, Ken Brodie never finished – he broke down – but he had accumulated enough points to wind up third in the Grand Prix, and he got a trophy out of it,” Roesch said.

He added Thunder on the Niagara is very good for the local economy.

“I look at this as a good economic stimulus for, specifically, North Tonawanda and our region,” Roesch said. “From the mayor to the aldermen to the guy that hooks up wires, the Highway Department. … If I made a phone call to one of the department heads, they were down there in a minute to help us out.

“It’s a family deal, basically. With an operation like Snyder and GP 50 and Lyle (Dinsmore), they invite their customers, their employees. It’s really a good event for them to become involved in – and stay involved, we hope.

“We are tremendously grateful for Snyder Industries to be the main sponsor of this event, not only for the boat race, but also, we had the fireworks on Saturday night. That was another big deal. I tell you; I got so many compliments on that.”

He said it was all due to Snyder Industries help to promote the event, including the fireworks.

Roesch said another claim to fame for the event is “This is the only hydroplane race in New York state.”