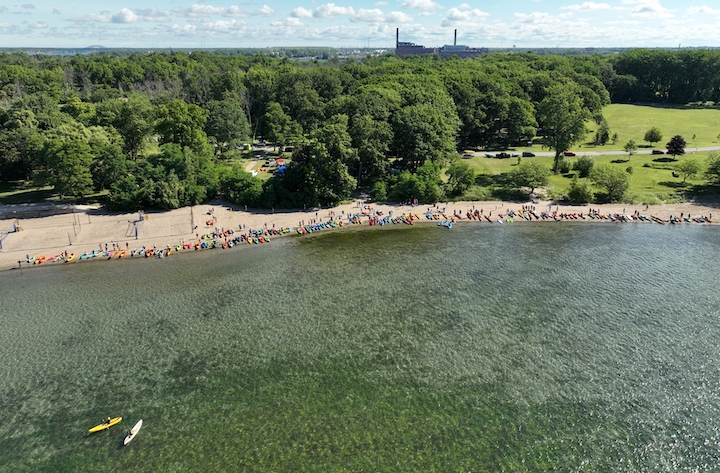 Paddles Up sets records in 2022, honors past participant

Paddles Up puts spotlight on ecotourism

After retirement from his career as an electrical engineer, Gregory Madejski discovered a new passion as a boat builder. For 26 years, he built kayaks and canoes, some from kits and some not, from cedar plywood and from cedar strips. He also paddled those boats in Paddles Up at Beaver Island State Park and elsewhere.

“We kayaked the Everglades. We kayaked the Genesee River rapids. He took one of the wooden kayaks through the rapids at Letchworth State Park,” said Roger Cook, who had been friends with Madejski.

Madejski died on May 29 after a battle with cancer. To honor his memory, his family brought three of the boats that he built to this year’s Paddles Up, held July 30 at Beaver Island State Park. They joined a large group that was congregated on the beach, ready to begin the 10 a.m. fun paddle.

According to Grand Island Recreation Department Supervisor Joe Menter, this year’s participation in Paddles Up set an event record, with 358 individuals signed up to participate in three ecotours, an ecohike, a learn-to-paddle event, and the large group fun paddle.

“It was another good event. It was nice to be able to plan an event without any restrictions or anything like that,” Menter said. This year marked the 16th year the event was held.

According to Gregory Stevens, executive director of the Niagara River Greenway Commission, “I love this event. It’s the only signature event that the Greenway runs. The idea is to get the largest possible group of people and let them experience the glories of the southern tip of Grand Island and realize that they can safely kayak on the Niagara River. So, we started with just a handful of kayakers.

“This is a unique event because of the combination of physical activity, adventure out on the water, and learning more about the ecology of the river. People seem to really like it this way. It feels good. They’re not motorboaters, they’re not yacht people. They’re small watercrafts, creeping up quietly to see wildlife and the natural side of Grand Island.”

In addition to the opportunity to paddle in the river, participants at Paddles Up could also talk to several exhibitors who were focused on a variety of environmental issues.

Sadie Kratt and Kasey Johnston both work with Erie County’s Department of Environment and Planning on the community’s climate action plan. According to the department’s website, “Erie County Climate Action is Erie County’s green initiative to develop an equity-centered Community Climate Action Plan, to identify actions we can take to reduce greenhouse gas emissions, and help the community adapt to our changing climate.”

Kratt said, “We have a lot of people interested in the waterway and the environment coming into this event, so we’re here promoting our Community Climate Action Plan. It’s a plan that’s in line with New York State Community Leadership Climate and Community Protection Act and the New York state climate plan. The goal of this plan is to get people aware of how climate change is affecting Erie County. We’re here trying to get people to read about it and give us feedback on our strategies, just so it’s community-based, not governmental-based.”

Anne McCooey, executive director of the Black Rock-Riverside Alliance, said she’s working with the National Wildlife Federation “to encourage people and businesses and schools to start planting purposefully for wildlife, to encourage pollinators and birds to be part of our living environment. There’s a certified program, where people can get their yards certified as habitats. There’s a quick, simple checklist that they can get. They just go through their yard to see that they are providing some food, some water, and some shelter for wildlife, and then they can become a certified habitat.”

McCooey said this certification is something that can be given to any size habitat, even one as small as a container garden on a second-floor balcony.

For more information about how to certify a garden as a wildlife habitat, check out the National Wildlife Federation’s website at https://www.nwf.org/CERTIFY.

Denise Clay, who works with the U.S. Fish and Wildlife Service as a fish biologist, said, “We do a lot of work in the Niagara River, especially with lake sturgeon and lake trout. This is a mini refuge to show what we have at the Iroquois National Wildlife Refuge. We educate about some of the environmental issues: conservation, different habitats. There are a lot of topics that we cover.”

In addition to the exhibitors, there was also a videographer present to document the day’s events. Marcus Lazarre said he works with Full Circle Studios in downtown Buffalo.

“Today, I am taking video for the Niagara Falls visitor center kiosks,” he said. “They’re touchable screen kiosks, and when you click the selection, the video will come up. We’re doing this all along the North Tonawanda-Buffalo-Wheatfield areas, and this is one for Beaver.”

Lazarre, who specializes in creating visual effects, said he enjoyed the event: “It’s a lot of fun. I’ve met a lot of cool people today, and I got a lot of cool shots.”

Menter said there were many people and organizations to thank for the success of the event, including the Niagara River Greenway Commission, New York State Department of Parks, Recreation and Historic Preservation, and the group that made up the safety teams. That unit included members of the New York State Parks Police, the Grand Island Fire Co., the Buffalo-Niagara Waterkeeper, and Grand Island’s Recreation Department, as well as volunteers from the community.

“We couldn’t do it without the safety team,” Menter said.

Julie Madejski, her daughter Rachel and her son James, participated in Paddles Up to honor Greg Majewski. They honored Majewski's memory by paddling in wooden boats that he had built during his 26 years of boat building. Pointing out one of the boats, she said, “We brought three boats that he built for us. There’s a few more back at the house. This boat is a hybrid. It’s called a Sassafras. It’s a two-person boat. It’s a hybrid between a canoe and a kayak. You sit a little bit higher, and you paddle it like a kayak.”

Rosalie Madejski talked about what Paddles Up meant to her husband, who “was in just about every Paddles Up.” The last time he participated in Paddles Up was a year ago. He needed his grandson to help him get in and out of the kayak. He couldn’t get into it because he was so sick (with cancer).

“As a family, we decided to gather his boats,” she said. “My grandson and my granddaughter and my daughter decided to paddle in honor of Gregory (Julie, James, and Rachel). He built all those boats. He built one boat every winter. He got pretty good at it.”