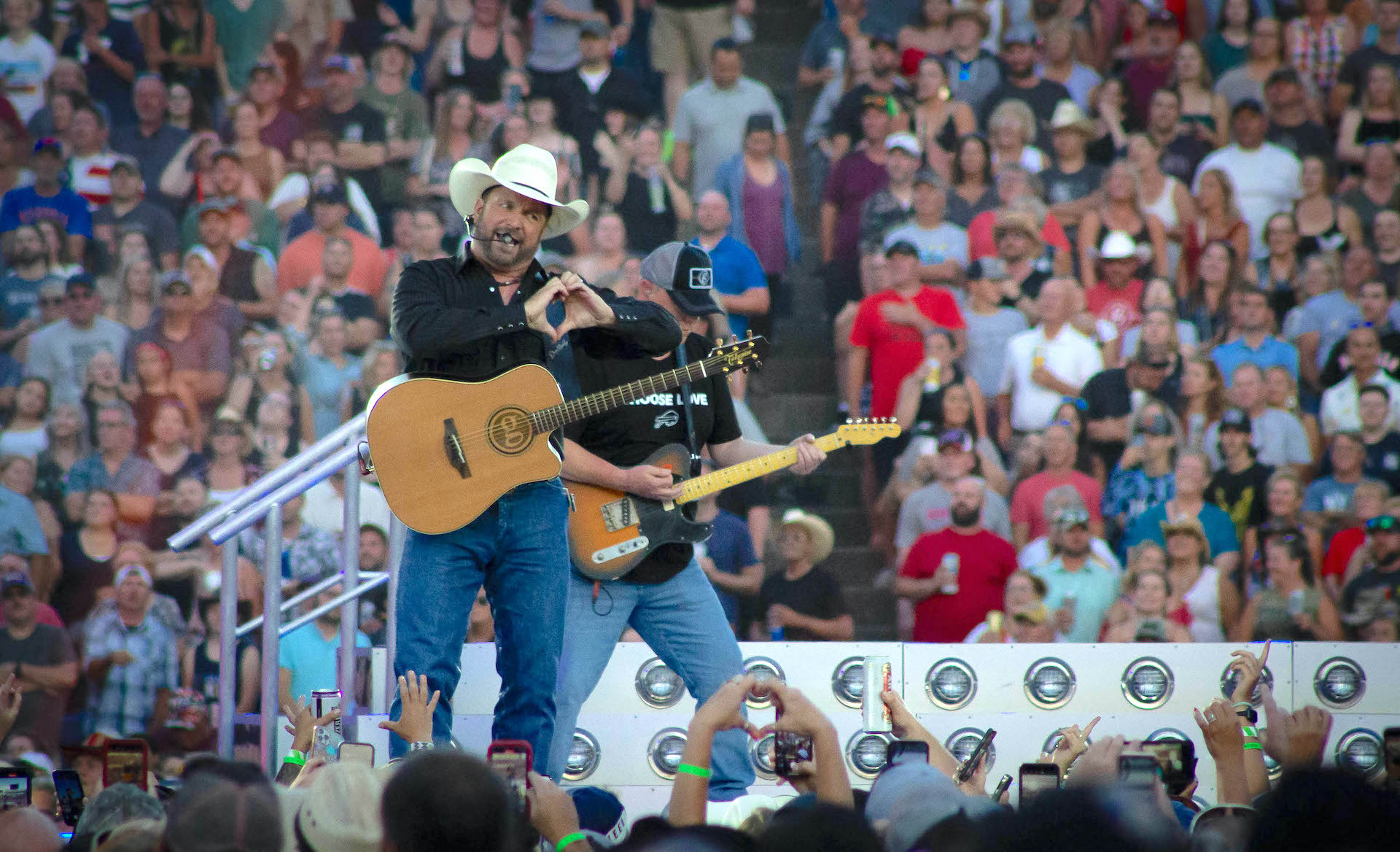 Garth Brooks shows his love for the Highmark Stadium crowd.

Article and photos by Thom Jennings

It’s 8:20 p.m. on a hot Saturday night in Orchard Park, and at Highmark Stadium, Garth Brooks is getting ready to make his entrance. As the drums rise up, they reveal Brooks underneath them, looking like Hercules lifting them skyward. It’s a grand entrance, and the fans respond with a loud roar. It’s finally showtime.

A day earlier, Brooks met with the press. His appearance was far more subdued: He simply appeared at the door to the press room at Highmark Stadium with no fanfare and began a conversation.

Brooks' career peaked in the 1990s when classic rock and hair metal bands became passe due to the rise of grunge. Unlike a stereotypical rock star who seems larger than life, Brooks built his career by building a personal relationship with his fans. Instead of projecting an image that he was above them, Brooks became one with his legion of fans. He was more than a musician – he was a son, a husband and a father – and at his core, he was just as much a music fan as them.

The concert, like the press conference, is a study in contrasts. Here is one of the best-known and top-selling artists in the history of recorded music in jeans and a baseball cap fielding every question with enthusiasm and respect. The following night, he will be commanding the attention of an NFL stadium filled with fans.

Brooks mentioned the press conference multiple times during his performance Saturday night. One of the questions he was asked was “Why Buffalo?”

“At this age, you don't pick a spot you haven't enjoyed yet; and we're not here to see what's going to happen, we're here because we know what does happen,” Brooks answered.

It was clear he knew he was in Buffalo. Multiple band members sported “Choose Love” shirts, and one of the evening’s musical highlights was an over-the-top rendition of “Shout” with Brook’s background singer, Robert Bailey. It turns out that Bailey was part of the fictitious band from “Animal House,” Otis Day and the Knights, who sang “Shout” in the film.

In concert, Brooks is a unique combination of talents. At times, he emulates Bruce Springsteen with his intensity, and at other times he draws fans in with just an acoustic guitar, performing requests that fans have held up on signs scattered all over the venue.

After opening the show with a rapid-fire succession of hits that included “All Day Long” “Rodeo,” “Two of a Kind, Workin' on a Full House,” and “Two Piña Coladas,” he snuck in a cover of Nitty Gritty Dirt Band’s “Fishin' in the Dark.” That set the tone for a magical evening of music. 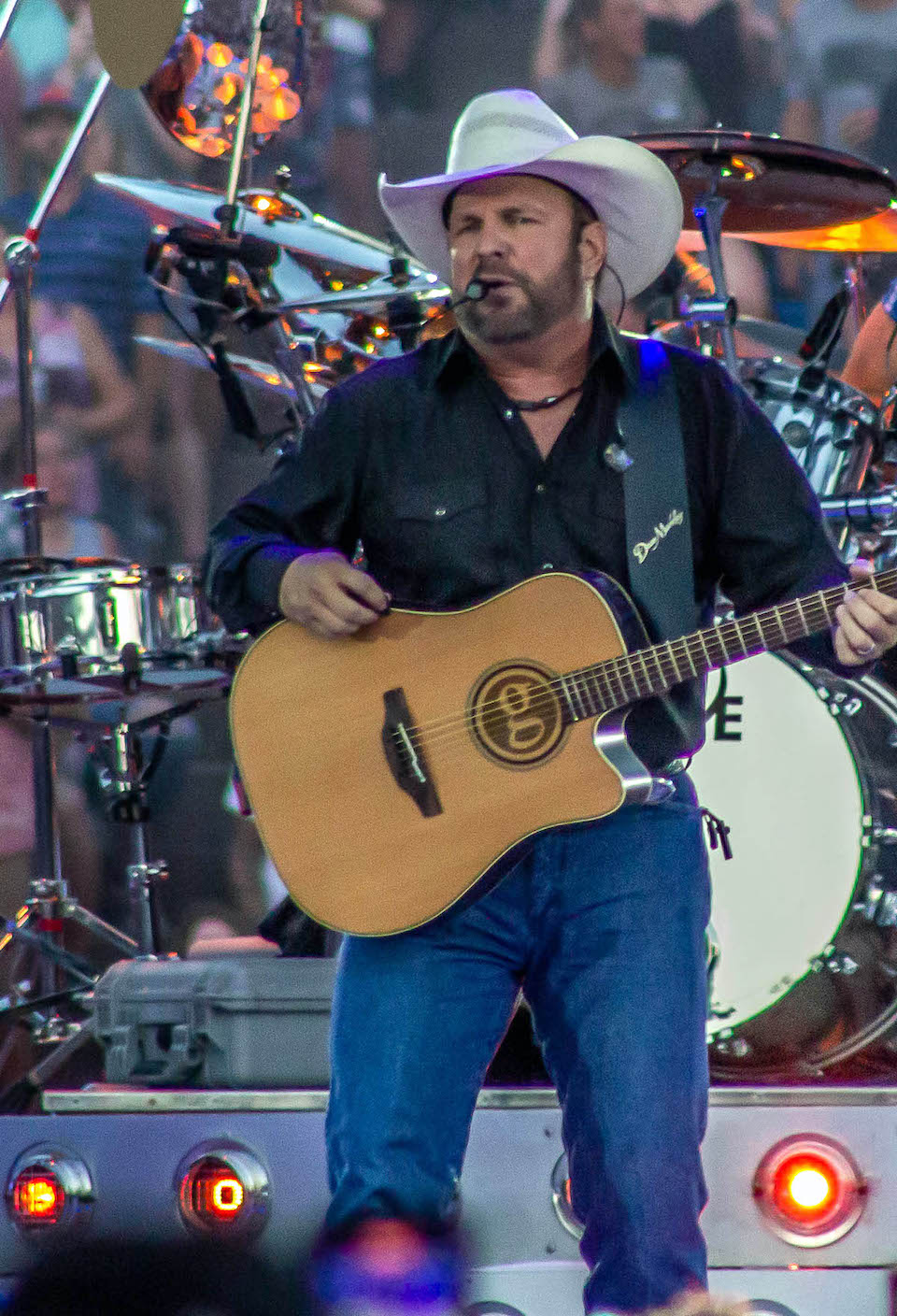 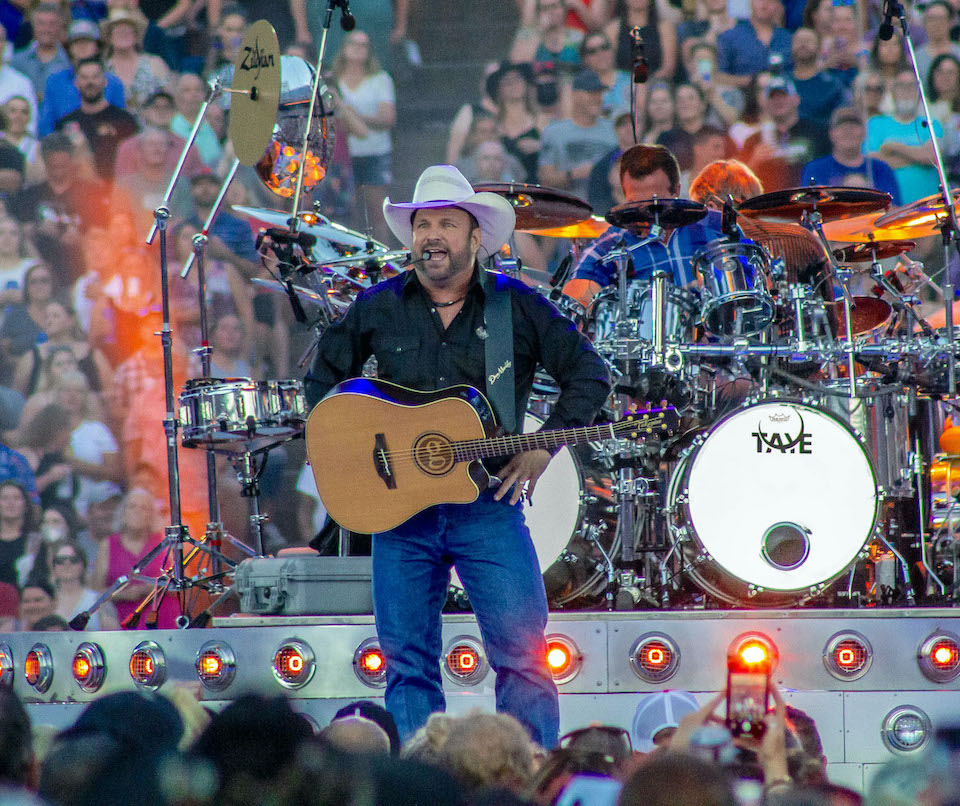 A day before, Brooks was asked how he could make a stadium show feel intimate, and he said, “We did a dive bar tour and our job was to make dive bars feel like stadiums, and it’s a lot easier to make a stadium feel like a dive bar. I'm amazed, it's one of the warmest, if not most sweetest kind of feelings. You feel like you're just in warm water the whole time, like you're taking a bath. They've got you, and I wish I could explain it, because I would have bet everything – including maybe two of my daughters – it wasn't going to be sincere.”

There was definitely a sincerity to Brooks’ performance. He is one of the few major performers to give his band members lengthy, formal introductions, and he even adds their names on the big screen as they are introduced.

The show's apex came with a raucous version and massive sing-along of “Friends in Low Place,” and while that would be a safe way to close the set before the encores, Brooks ended with “The Dance.”

Brooks returned by himself with an acoustic guitar for the encores, and pulled songs from signs and chatted with the crowd, just like he was in a dive bar. The band kicked in on the tail end of “We Shall be Free,” a song that is even more relevant today than when it came out in the 1990s.

Trisha Yearwood did make an appearance, and her reception may have been louder than the one for her husband. After a lovely duet of “Shallow,” Yearwood performed a couple of her songs, and then assumed the role of backup singer for the evening’s closer, “Standing Outside the Fire.”

The last thing he told the press corps the day before was that “I don't know what's next, but I know this: Right now, I can go home after Saturday night and, if I never get to play again, that’s OK.

“They showed me that they can come in these numbers but, if it’s three or 300,000 people, it’s always going to be about sincerity.”

And people sincerely loved his show in Buffalo. 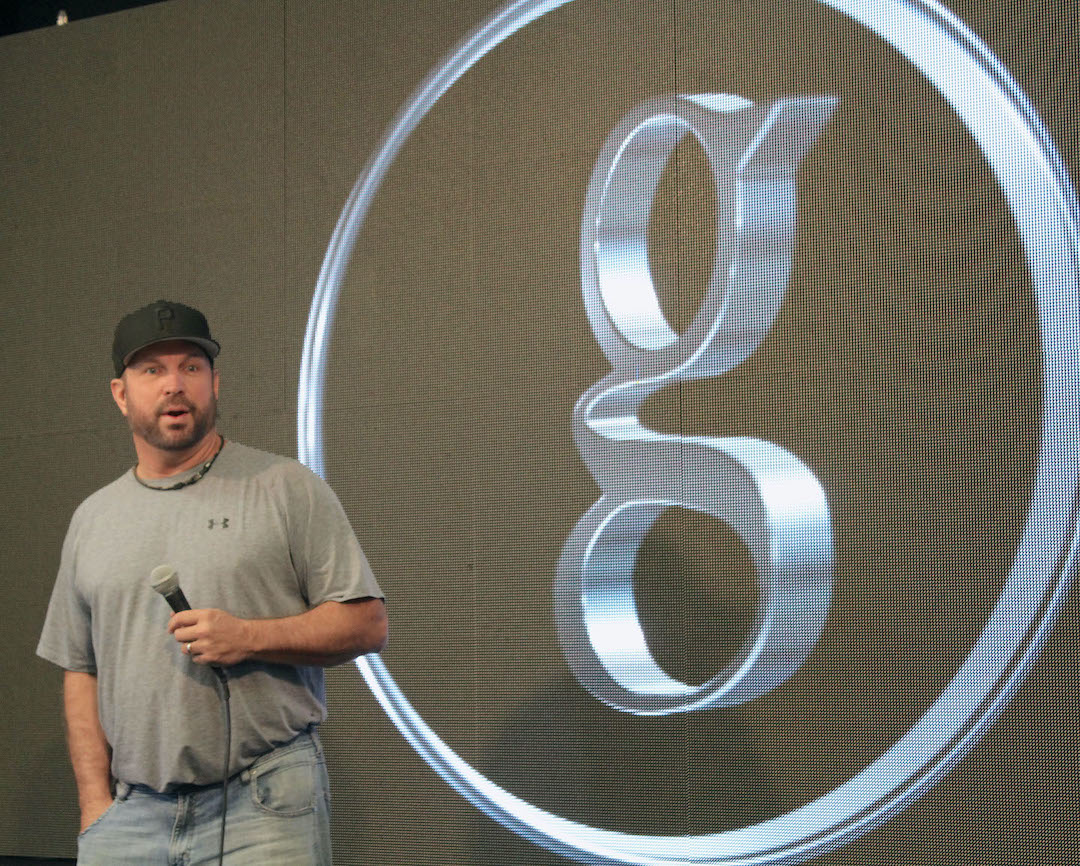 Garth Brooks speaks with the media at a preshow press conference.