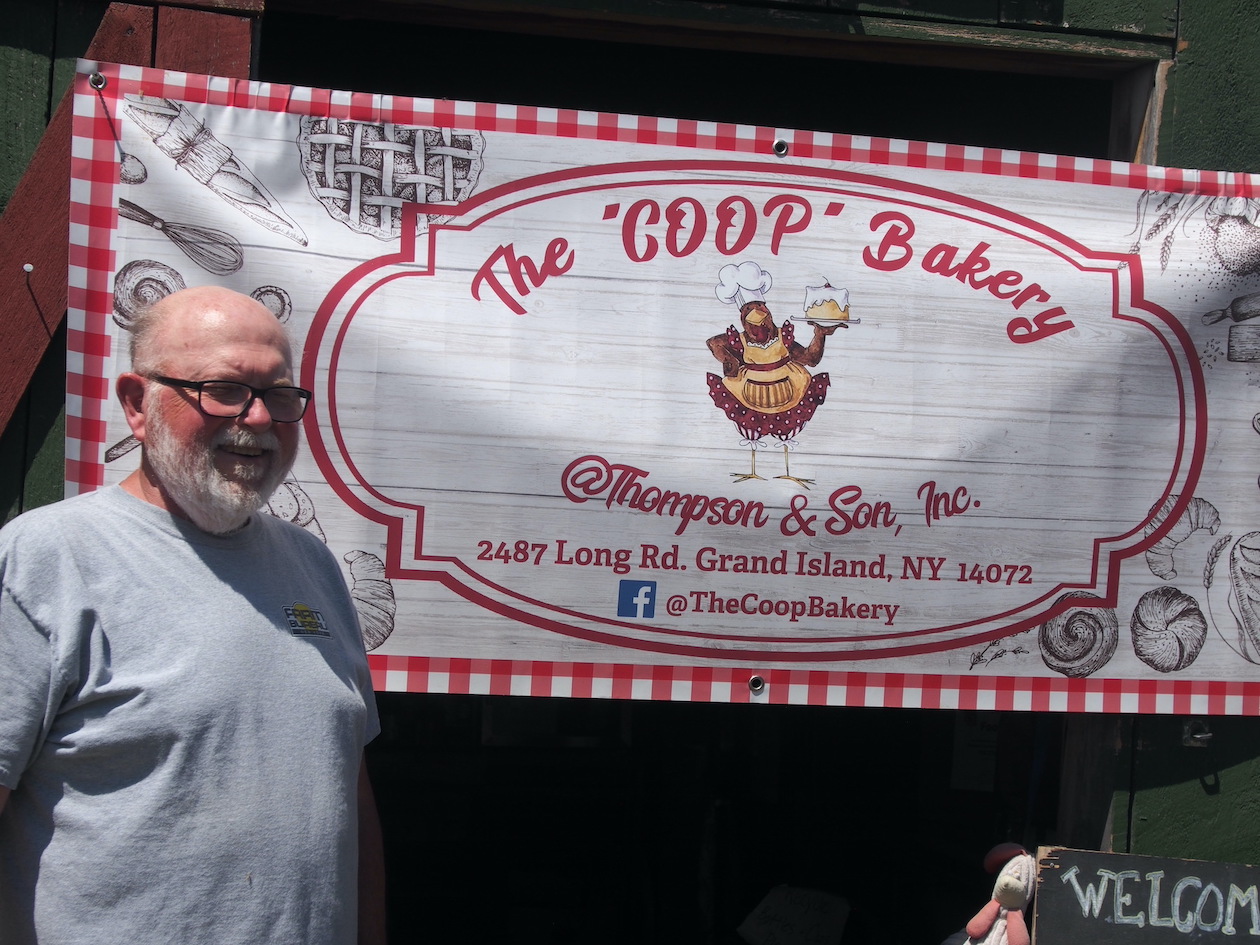 Tom Thompson stands in front of a sign advertising home-baked desserts, prepared by the Coop bakery.

A video crew visited the Long Road farm of Tom Thompson on Saturday as part of a Farm Bureau of Erie County project “to produce video work to help explain local agriculture to the general public and, sometimes, for specific targeted audiences,” said David Eckhardt, a photographer who is part of a video team hired by the Farm Bureau.

Eckhardt said he owns a business called Agricultural Imaging. In addition to Eckhardt, videographer Lenny Potwora was working on the project.

“The purpose of the video is to address a lot of the concerns that farms have that are not necessarily beneficial to farming,” Eckhardt said. “That’s why it’s a concern. The finished video may end up going to legislators. It may go to the state level. It may be shown at local fairs and things like that. The goal is to get the word out to the public that farming is not a 9-5 job, Monday through Friday. It’s a seven-day-a-week job, and it’s not necessarily dictated by a 40-hour week. They may reach 40 hours somewhere around Wednesday or Thursday. They may have to bail on a Tuesday night, up until about 10 or 11 at night if it’s going to be raining in the morning. So, they have to deal with the weather and work around it. We just feel that there should be more information to the public on the challenges of farming.”

Eckhardt said the video team, which was hired to produce the video, came to Thompson’s farm because “Tom invited us. He said that, on Saturdays, he has a little more traffic that comes by to buy produce. Some of his produce is from his own operation. Some comes from a few other farms.

“Tom invited us, and we said, ‘Sure, we’d be happy to come by.’ We thought that we would be able to interview some of the shoppers and ask them questions. Before you came, Tom did that. He asked somebody a few questions, and, on camera, they answered a few questions. So, a few clips here and there will be part of the video.”

Eckhardt said he was asked to participate in producing the video because “I do agricultural photography for exhibits at different fairs and carnivals and, because of that, they saw my work, and they asked, ‘Would you like to help produce a video to help to explain some of the challenges of farming in Erie County.’ We said, ‘Sure.’ So, I partnered with my videographer friend. I’m more of the photographer; he is more the videographer. We’ve been going around to different farms taking video and photographs.”

Thompson said farmers on Grand Island experience a variety of challenges. He talked about one farm that has been raising sheep to be brought to graze under solar panels in solar farms.

“There were some questions being brought up that the sheep were being starved, that the sheep weren’t being watered,” he said. “That was one of the issues that one of our local farms ran into. They have a statewide business raising their sheep under solar panels. This is the only place that had any issues. People asking questions like that.”

Another issue that Thompson faced was roadblocks to his plan to install solar panels in 20 unused acres in the back of his property. He said, “The town put in a bunch of regulations that made it so I can’t do solar here without the ZBA (Zoning Board of Appeals) agreeing to let me get within those limits set by the setback requirements. It cost me somewhere around $10,000 just for that in legal stuff, not to mention the fact that the contract’s going to expire in a couple of months.”

Another issue that Thompson faces has to do with the unintended effect of development. “Currently, I had to stop growing corn because the encroaching houses around here have brought the deer in. I have a giant herd that ate all of the corn. Not only did the deer eat it, the raccoons eat it, and I had to start storing my chicken feed in a separate building that keeps it away from the raccoons.”

Thompson said that other challenging issues include the cost of diesel fuel and water, both necessary to run a successful farm.