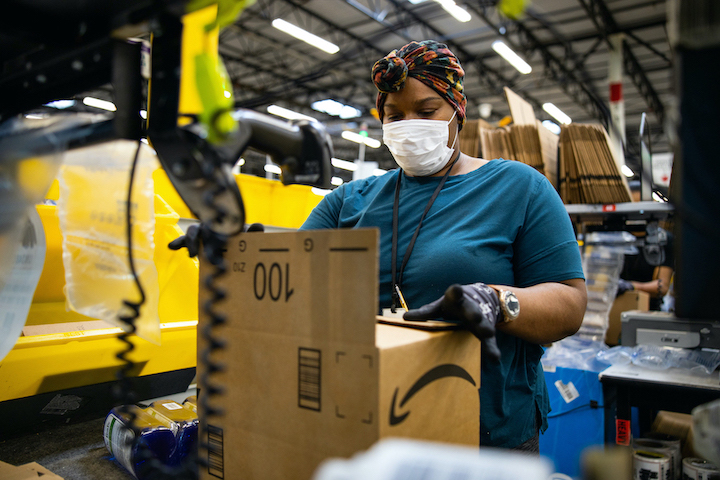 Still no consensus on Amazon benefits, even as town approves project

While Town of Niagara officials put their stamp of approval on the Amazon warehouse proposed for 8995 Lockport Road, questions still lingered Tuesday.

Both from a number of irate audience members and from reporters, after Supervisor Lee Wallace spoke for the second consecutive meeting about potential financial benefits an Amazon facility could bring.

Negotiations are ongoing, Wallace said publicly, for town-specific incentives Amazon may pay to locate its five-story, 650,000-square-foot fulfillment center at the intersection of Packard and Lockport roads.

Wallace provided few details about any asks from the town when questioned after he and the rest of the five-member Town Council approved the site plan for the facility by a 5-0 vote Tuesday.

“We’re in the process of developing a list now,” he said. “We will be negotiating with (developer) JB2 (Partners LLC) and Amazon.”

Wallace added the town’s biggest concerns are for what an Amazon facility would do to the town’s police and fire departments, as well as other infrastructure related to the building’s presence.

He and Councilman Richard A. Sirianni will represent the town, Wallace said.

Any results would be in addition to one of the other few remaining processes left to finish before the project gets started: negotiating tax incentives with the Niagara County Industrial Development Agency.

Amazon representatives appeared before that board earlier in July and will do so again, likely in August, to finalize any tax breaks one of the world’s largest corporations will receive for bringing what is expected to be about 1,000 jobs to the county.

Any of these tax breaks would have minimal effect on the town, as the Highway Department is the only generalized tax paid by property owners. Other taxes are in special districts like fire and water and do not affect the entire town.

Instead, the breaks would lower the amount of property tax paid to both Niagara County and the Niagara Wheatfield Central School District, likely coming in the form of a payment in lieu of taxes, or PILOT.

Should the town be successful in negotiating its own compensation, Wallace said, the money could go a long way toward helping what is a difficult financial situation looming on the horizon.

Wallace said the town’s landfill is quickly filling up. And the operators are significantly helping Niagara residents through several payments made annually to the town’s coffers.

About $200,000 comes directly from the landfill, Wallace said, which could dry up soon. He estimated it could be a matter of four years or less.

Bringing Amazon in could offset some of this, if lost, and help the town maintain its general fund without needing to implement a townwide tax.

Currently, Wallace said, Niagara residents pay nothing for their trash pickup, a feature that could end when the landfill fills up.

How would Amazon’s arrival, two years away, help this situation if ground is broken later this year? Wallace said any Amazon payment could help reduce the subsidies the general fund does on the Highway Department’s budget. In turn, Wallace said, the town is dipping annually into its savings accounts to prop up the general fund instead of turning to its residents for tax revenue.

“The Town of Niagara doesn’t raise enough money to fund (the programs in town),” Wallace said during comments before Tuesday’s vote. “We can’t continue to operate this way. It’s not good budgeting.”

Crowd Concerns and Were They Addressed?

A number of meeting attendees spoke up, once again, against the Amazon facility’s application. Traffic remained the largest issue, along with the reputation of Amazon as an employer.

Recent news reports have alluded to Amazon’s efforts to prevent worker unionization, and reports that truck drivers delivering product to customers didn’t have enough time to take bathroom breaks during their shifts.

But their concerns, again, fell on deaf ears.

Robert Taylor, who lives on Packard Road near the site, said the project will force him to move from the town. Turn lanes will not help, he said, with him backing his vehicle out of his driveway.

Taylor added the decision to work with Amazon is likely to bite the town later.

“This isn’t (General Motors) or Ford coming in here,” he said, after referencing the reports on Amazon’s business practices.

Regarding traffic concerns, at least, the councilmen made clear they’ve heard – and Amazon has heard – concerns throughout the months-long process and that mitigation will make things safer, not worse.

“I live (in a subdivision) off Packard Road,” Councilman Marc Carpenter said. “I’m not as impacted by this project as the people who live on Packard Road, but I drive it all the time.”

Carpenter said he’s voiced the same concerns as residents in the area and feels the added turn lanes and traffic signals, including at the intersection of Packard and Lockport roads, will reduce the number of crashes and help alleviate traffic flow issues.