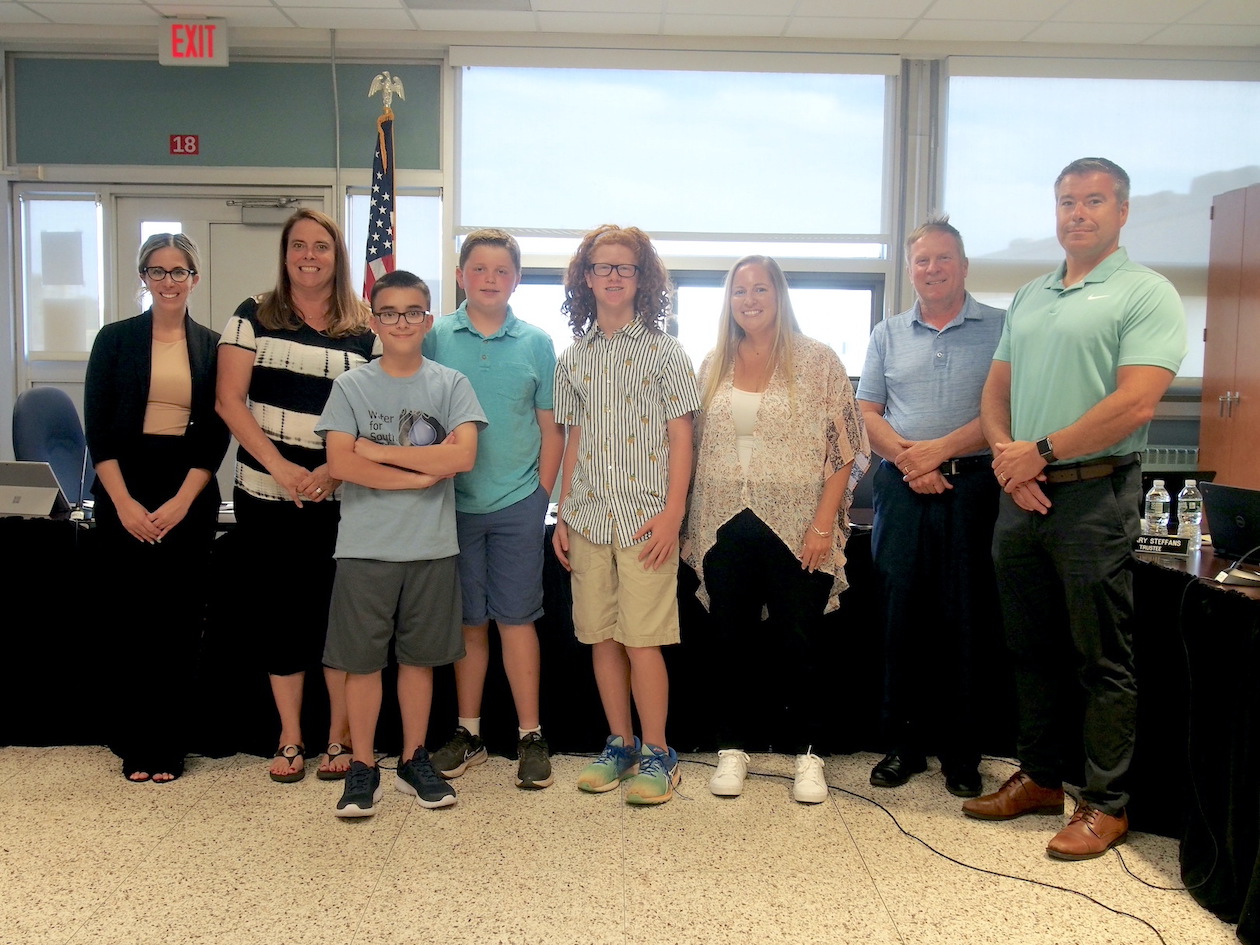 Veronica Connor Middle School students, who were honored for their role in raising $2,000 to buy a well for South Sudan, with the Grand Island Board of Education.

At Monday’s Grand Island Board of Education meeting, eight students were recognized for efforts made outside of the classroom. Jon Minton, Connor Lenhard and Zander Crevlin, all members of Troop 630, were honored for their work in achieving the status of Eagle Scout. Veronica Conner Middle School students Wesley Pelczynski, Maxx Anderson, Mitchell Dylag and Andrew MacConkey were recognized for their part in raising $2,000 for the Water for Sudan project, which made it possible for a well to be built in South Sudan. In addition, sophomore Natalie Kopf was honored for traveling to Washington, D.C., to participate in the Cystic Fibrosis Teen Advocacy Day.

Connor described the challenges that he faced in achieving the rank of Eagle Scout. Just as he was ready to start working on a project at Buckhorn Island State Park in 2020, the COVID-19 pandemic caused widespread shutdowns. His work had to be suspended.

When restrictions were lifted, Connor was informed that he could not proceed until he got approval from the federal government because there were federally protected wetlands in the park.

He said he was working under time limits, that “an Eagle Scout project has to be completed within six months of your 18th birthday.” Because getting approvals from the federal government would take time, he said, he looked around for a different project and found one at the Nike Base, which involved making a sign at the entrance of the Nike Base trails.

Connor found out that getting a sign made was more challenging than he expected. The sign had to be engraved, rather than painted. He said he first asked family and friends, with negative results. Then he went to ASI Signage Innovations.

“They had the sign made, and we barely had enough time. I think that I had a few days to spare,” Connor said. “I want to say that I made the arch that the sign is on (at the Nike Base), but, logistically, it would have been too hard to do within my time frame.”

Zander said his project came about because of the many firefighters among his friends and family: “So, when I did my Eagle project, I asked what I could do for them.”

As a result, he made a basement training piece so that the firefighters could “practice in their full equipment, going in and out of a small basement window. That’s pretty hard. It’s a small space. There was a lot of work buying all the lumber, cutting it, preparing it. Then, when we were assembling it, the entire troop was on a campout, so it was just my family and I who were making this entire basement piece. It was a good experience.”

Jon’s Eagle Scout project was the construction of a ticket booth for St. Stephen Roman Catholic Church “for all their events. My dad and I went shopping for lumber, and we started working on it. It was a cool project,” he said, noting construction of the ticket booth took three months from start to finish.

Connor said he would encourage other young people to join the Boy Scouts. He said the skills and the engagement with the community “are so invaluable.”

“It’s a great opportunity. A lot of friends you make, good experiences going camping, spaghetti dinners. It’s great for a small kid to learn all that stuff,” Zander said.

“I would totally recommend it, for the life skills and all of the merit badges that go along with Scouting,” as well as “moving up to the next rank and the motivation to keep going,” Jon said.

“It’s a lot of work and a lot of dedication on the part of the Scouts and their parents. They have been working on this since first grade,” said Sue Marston, vice president of the Board of Education. “Congratulations to all of you and your parents.”

“These boys were part of our team of people who participated in raising money to purchase the well in South Sudan. It’s really based on a book called ‘The Long Walk for Water’ about a young boy who led refugees to a refugee camp in Africa. Over 1,000 refugees were led by this boy. He talks about his travels to get food and water.”

That boy, Fitzpatrick said, now lives in Rochester. “We connected with his father. … That’s where the inspiration came from.”

“These boys were part of a class that raised $2,000 for South Sudan,” Fitzpatrick said.

“We basically went around and asked family members and friends. We walked around the track for the entire day,” Wesley said.

Fitzpatrick added that, in previous years, the students carried jugs of water when walking around the track, but that the weather conditions this year was not conducive to that.

“Raising $2,000 is incredible, and it’s going to serve some people very well. Congratulations, boys,” Graham said. “I appreciate your leadership in that.”

Natalie traveled with a friend from Clarence to Washington, D.C., as part of a group of more than 60 teen advocates from all over the country, to advocate for the Pasteur Act, which would revitalize the global market for novel antibiotics, according to the Cystic Fibrosis Foundation. Natalie said she met with staff members from the offices of Congressmen Brian Higgins and Chris Jacobs, and U.S. Sen. Charles Schumer.

When asked if she would go again, Natalie said, “If I can, I would go again because there would be different things that we can do.”

“My little brother has CF,” she said, explaining her personal connection to the issue.

Board of Education Reorganization

During the Board of Education’s reorganization meeting, members elected Ashli Dreher to be President and Marston to serve as vice president.