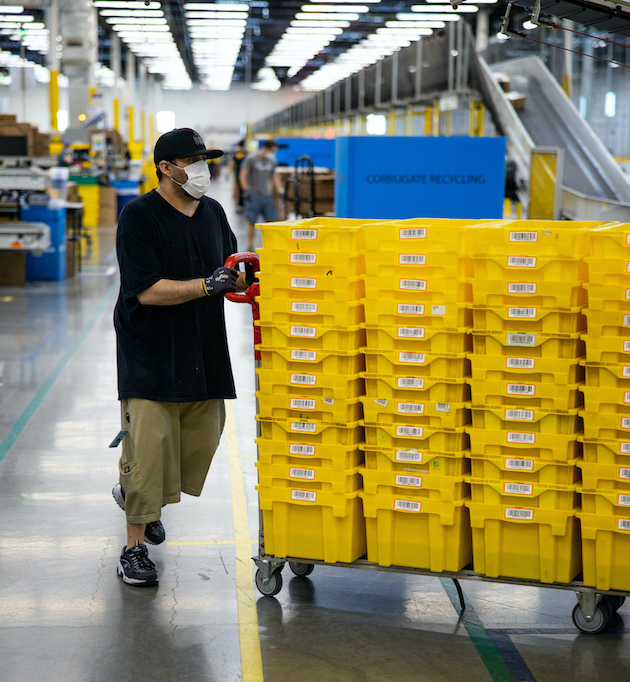 Amazon is looking to build a shipping and warehouse facility in the Town of Niagara. (Amazon photo)

By Timothy Chipp
What once looked like a long and arduous process bringing an Amazon warehouse to the Town of Niagara is now down to only a few remaining steps.
On Tuesday, Zoning Board of Appeals members approved three different types of variances for the project, according to Supervisor Lee Wallace.
With those complete – granted for the five-story building height, signage size and placement and driveway location – site plan approval and finalizing any tax agreements remain.
Wallace said the project is expected to come up for a vote at the Town Council’s meeting at 6:30 p.m. Tuesday, at Niagara Town Hall, 7105 Lockport Road.
And according to several media reports, the tax questions could be finalized with the Niagara County Industrial Development Agency board soon.
According to reports, the NCIDA board agreed to set a public hearing on granting Amazon more than $120 million in tax breaks over a 15-year span.
Any payment in lieu of taxes, or PILOT, wouldn’t have much impact on the Town of Niagara, though, according to Wallace. Niagara only collects taxes in special districts, with no general fund town tax.
Amazon’s facility would impact the town’s Highway Department funding only, with the overwhelming majority of Amazon’s negotiated tax breaks affecting Niagara County as a whole and the Niagara Wheatfield Central School District.
But Wallace and other council members have argued previously that the presence of Amazon’s facility, valued at $550 million in the latest estimates, would allow the town to repave and maintain roads at a cheaper cost to residents.
Those roads, Wallace said, would go across the entire town. But Amazon may take care of a few of Niagara’s biggest problem spots for them right away.
Amazon’s plan is to make significant changes to the way traffic flows on Lockport and Packard roads, which Wallace said are expected to make things safer, not more dangerous.
“This isn’t going to stop the traffic, but it will control it better,” he said after a work session Wednesday.
Wallace added he expects residents from the surrounding areas to continue voicing their displeasure with the proposal, but that there are several residents in the town who are excited by what Amazon is bringing and want the project to move forward.
He said their job on the council is to balance all of those opinions with financial and safety issues to make a decision.
“Our job is to make a decision of what’s best for the whole town,” he said.