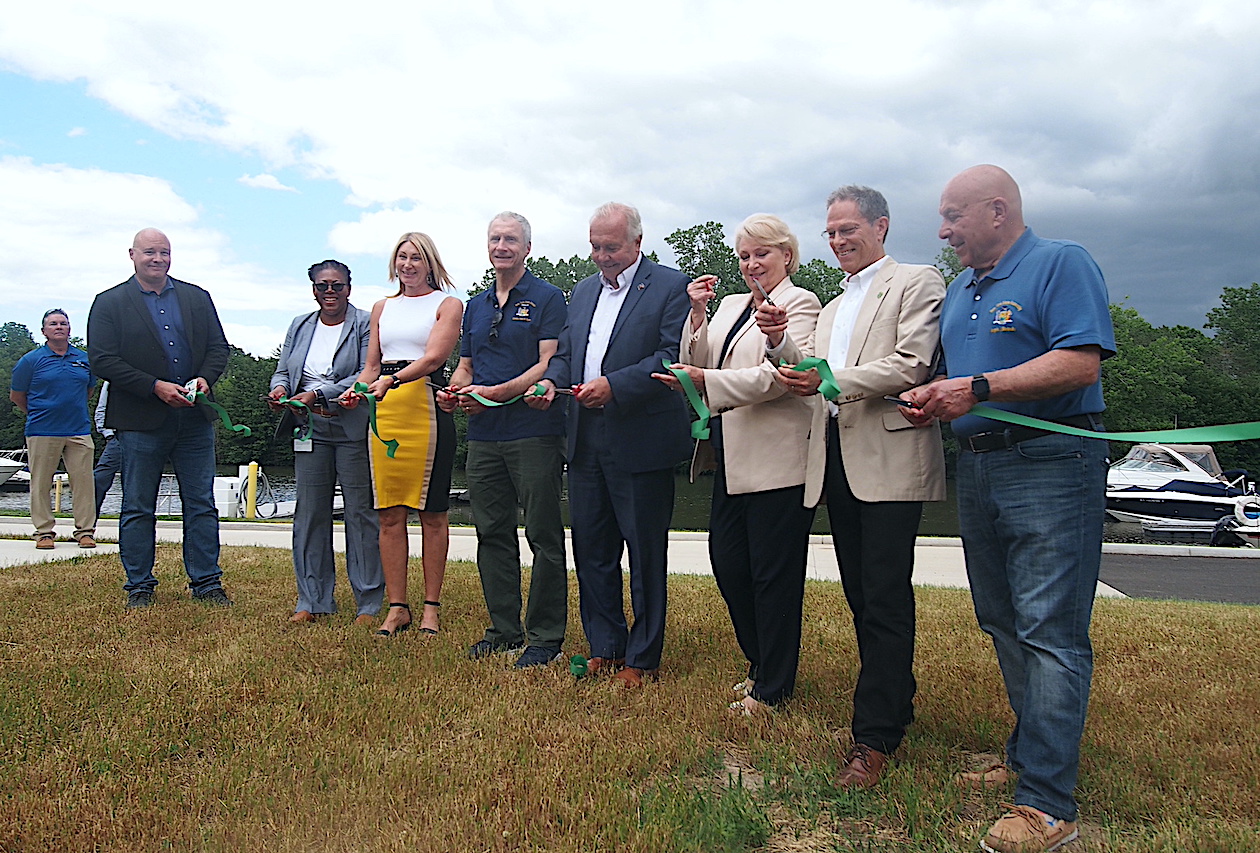 Elected officials, as well as representatives from State Parks, use multiple pairs of scissors to cut a ribbon.

On June 28, a ribbon-cutting ceremony was held to celebrate the improvements and upgrades to Big Six Marina State Park. Mistretta explained that work on the park occurred in phases.

The first phase started in 2014, “when we invested $1.4 million into the docks,” he said. The second phase, recently completed, involved $2.4 million in renovations. Changes included improved parking, “a state-of-the-art boat launch, with plenty of room for maneuverability. We renovated the building and improved the restrooms. It’s a little more amenable for Cyndy Montana and Montana International,” concessionaire for Beaver Island State Park and for the Big Six Marina.” Landscaping has also been renovated.

Montana said she shared Mistretta’s feelings about the marina: “I am so excited about the things that we can do to bring Beaver Island State Park back to life, and to make Big Six Marina one of the most coveted marinas in Western New York.”

Daniella Piper, regional manager and senior vice president for the New York Power Authority’s Western Region, said NYPA is committed to environmental stewardship: “We recognize that these resources are part of the legacy that we pass on to future generations. It’s our responsibility, especially those of us from Western New York, to preserve and enhance the experience of visiting these wonderful locations.” 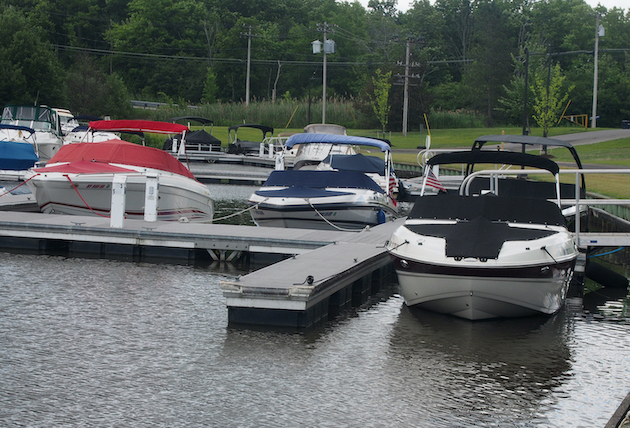 Boat launches are part of the renovations that were accomplished in the second phase of work done to upgrade and make the marina more accessible. The renovations include making the entire facility more accessible, based on guidelines provided by the Americans with Disabilities Act.

Mistretta, as well as all of the elected officials who spoke, mentioned Gov. Kathy Hochul’s support of State Parks.

“Gov. Kathy Hochul has been a huge supporter of parks,” Mistretta said. “With the time and attention she is giving our agency, there’s never been a more supportive governor.”

According to New York State Sen. Sean Ryan, “We all know that we live in Buffalo for the summers and you want to be able to get out on the water, to touch the water, to fish, to swim. There’s no better way to do that than to go out in a boat. We’re always looking for ways to expand access to the water. This fits right in with that. Gov. Hochul is a big fan of state parks. We consider them the people’s country club. It’s free for all of us, so it’s a wonderful thing.

“This marina will be a destination for Grand Island residents and around Western New York. Well done, by New York State Parks.”

“State Parks has a piece of every part of my district. You cannot find a better partner or a harder-working group,” he said. “And, of course, you have a governor who is willing to send your tax dollars back. What I want to do is to thank Gov. Hochul. I want to thank the vision. I want to thank (State) Parks. I want to thank everyone that’s going to come and look at this. Get on your bicycle. You can ride 38 miles with loops. You can come here. You can get to Buffalo. You can get to Fort Niagara. We are now the epicenter of tourism when it comes to nature.”

Grand Island Town Supervisor John Whitney said, “Thank you all for coming. First, I’d like to thank Gov. Hochul, Sen. Ryan, Assemblyman Morinello, and the New York State Office of Parks, Recreation and Historic Preservation. New York State Parks is a major component to Grand Island. Beaver Island to the south of the Island, the whole West River trailway all the way around to Buckhorn Island State Park at the north end of the Island. This marina. They are great contributors and great partners to have. We’re very fortunate to have them.”

The future looks bright, said both Mistretta and Montana.

“We want to make the path from the boat launch up to the West River Shoreline Trail nice and clear,” Mistretta said. He also talked about projects to facilitate fishing. “So a couple more projects, and this will be rocking.”

“There are 16 more years in the contract, and I can’t wait to see what we are going to do together, because we have done so much so far,” Montana said. “Montana International has all kinds of ideas.”

She added, “I love being the concessionaire, but I also want to be part of building ecotourism and having Grand Island not be just the pass-through between Niagara Falls and Buffalo. This is bigger than just running a company for me. I have a great team behind me. Just wait and see all of the wonderful things we are going to do to make Grand Island and all the parks a wonderful place.” 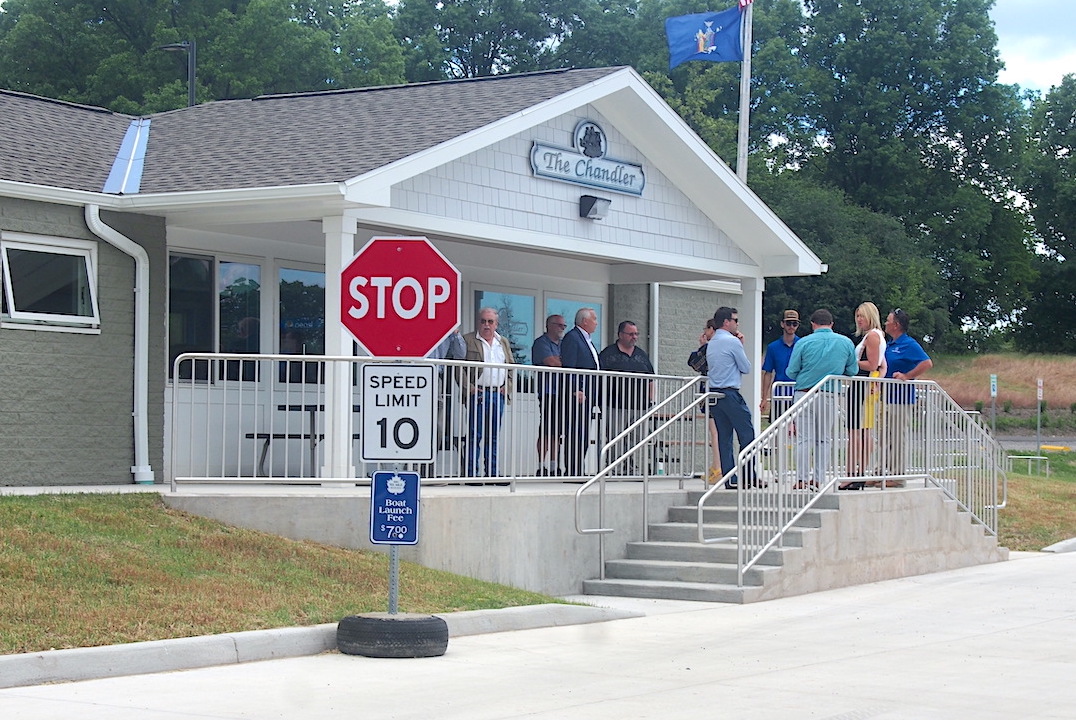 This structure has been renovated as part of phase two of the Big Six Marina State park renovations.