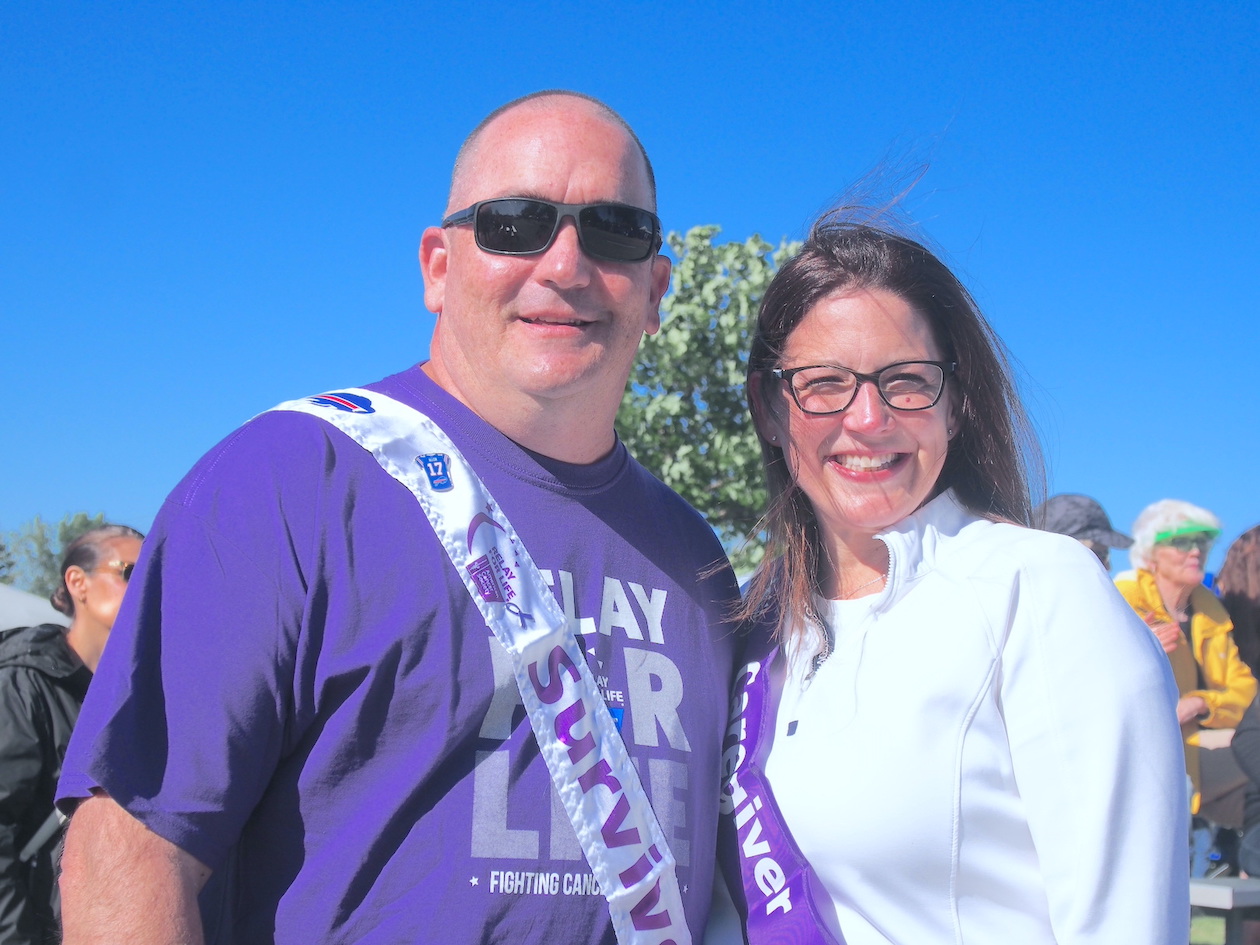 Eric and Alicia Fiebelkorn enjoy "Taste of Relay" together on a sunny, windy Saturday.

Cancer changes a person forever, said Relay For Life Honorary Survivor Eric Fiebelkorn, who was diagnosed with cancer in 2012. He said the time that he spent fighting cancer gave him the opportunity to explore his faith and to reassess the direction of his life. He said this time of great pain and suffering also provided him with blessings.

Fiebelkorn said that, during chemotherapy, he had the time to focus inward, to think about where his life was headed, and to contemplate what comes when a lifetime is over. Sitting and focusing inward was difficult for Fiebelkorn, who said he has always been an impatient person with “frenetic energy.” Going against his energy and his impatience has changed him, he said, making him more patient, although he still has a high energy level.

“There are no clocks. Time stands still in a cancer center,” Fiebelkorn said. “My first thought, when my doctor called and told me (that I had cancer), was ‘How long do I have?’ Everyone cycles differently, but mine was ‘Who’s going to take care of my wife, my kids? What’s going to happen with our finances?’ All of these kinds of things start tumbling around.”

After Fiebelkorn recovered from lymphoma, he was invited to serve as a coach to others who were struggling with a similar type of cancer.

“Roswell has a formal program. That what got me started,” he said. “Dr. Czuczman called me a year later and said, ‘Eric, do me a favor. I have a guy in here. He’s 36, has two kids. He has lymphoma.’

"Dr. Czuczman is mainly a lymphoma/myeloma doctor. Sometimes he called for other disciplines if he knew the age and he’d say, ‘Can you just come talk to him?’ First and foremost, people need to see that not everybody dies.”

Death, however, is a constant presence for cancer patients, Fiebelkorn said. He encourages the people that he coaches to look directly at it. “‘You’re facing your mortality sooner than you thought and for much longer. It’s not a car accident, where you get your life before your eyes. The unfortunate or maybe fortunate part of cancer is you get the very slow play before your eyes.

“I’m Christian, that’s what I believe in. I investigated what I believe and why I believe it. Whatever it is, make sure that, before you’re potentially going to meet your end, you have looked at it. Think about it. Let’s hope that it’s not now. Later down the road, rather than sooner. People don’t live their lives like there’s an end.

“I’m not panicky, but I live my life like the end is coming, and I don’t know when. I want to leave a mark that’s positive and gives glory to the person who created me. I encourage people to look to their faith. Are you at peace with your maker? Do you have any idea of what happens next? Because the only peace that I had through all of that was when I came to peace with that. Because it’s happening.”

One of the biggest challenges of cancer is the reaction of other people to serious illness. During the course of his treatment, Fiebelkorn lost 90 pounds and became extremely weak.

“It was very hard during treatment to have people, who meant well, say, ‘Oh, I know what you’re going through,’ ” he said. “When you’re in that kind of suffering, your first reaction is ‘Don’t say that.’ I had my experience with it, and many others did. It almost angers you. They don’t mean to, but it minimizes what you go through. They don’t understand. Instead of showing empathy, there’s a lack of empathy there.

“You can share in people’s pain and emotion. That’s one thing that I tell families. When they have someone suffering, I tell thing to say and not to say.”

Fiebelkorn said surviving a very aggressive and potentially fatal cancer helped him to do a reset on his life. He said he adjusted his priorities after coming face to face with his mortality.

“I had a faith before I had cancer, but I wasn’t committed to it,” he said. “I hadn’t really thought about what it meant, how I believed, and what it was supposed to mean to me. And there are a lot of people in our era who have walked away from faith and religion. The requirement for me is a personal relationship with God. Anything else that comes after that is extra.”

Physical pain is a constant reminder to Fiebelkorn of his fight for life.

“Ten years later, there are things that are probably physically changed forever, and there are things that I’ve gotten back,” he said. “For a year or two, I had pins and needles in my hands and feet and neuropathy really bad. Now I just have some deadening in my fingertips, nothing major. The type of chemotherapy that I had destroys joint tissue. I don’t like telling people because it sounds like a complaint, but it’s not. Every day, I wake up in some sort of pain. Hands, elbows, knees. It’s not excruciating, not the end of the world, but it’s a reminder every day. When I speak about my situation, I say that cancer was awful, and I don’t wish it on anybody.

Fiebelkorn described his wife, Alicia, as his “biggest blessing.”

“My wife works full time as a teacher. She had a 4-year-old and two 2-year-olds at that time. And she took care of me. I spent almost all of that time in bed. As it went on, it got worse. Between losing your hair and the physical aspect, the pain you’re in … she took care of me, she took care of the kids, she worked her job, ran the household.

“One of those blessings – and it sounds kind of morbid – I was talking to somebody who suffered through some brain cancer. When my kids do something. Something good. Something where there’s a moment or a birthday. Sometimes, it’s something small. My daughter was playing basketball, and she made a shot. My very first thought now is, ‘I could have missed this.’ And my very next thought is ‘Thanks, God, for giving me this opportunity for being there.’ It is a gift. I have them. I have you. I have everybody I meet. I believe that God put me in the path of people.”

Fiebelkorn, who has served as president of the Grand Island Chamber of Commerce for 12 years, said, “I believe that God gave me certain gifts, skills and talents. He didn’t give me some that I see in others. But the ones he gave me, I look for every opportunity to really honor him for this opportunity in serving other people. I carried this mantra since I was healed. I will be a faithful servant. I will serve others. Less of me and more of everyone else. It’s been a blessing since then.”

Fiebelkorn’s cancer is now in remission.