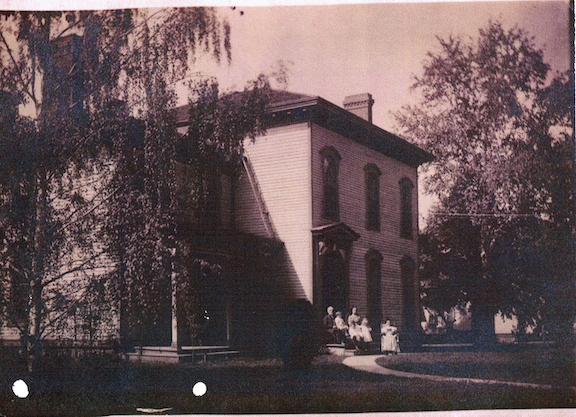 This photo of the former "Kelsey Hotel" dates back into the 1800s.

Counting down to Lewiston's bicentennial: Kelsey Tavern a magnificent marvel

Well, I guess it was bound to happen! Writing a series of 15 articles on buildings in excess of 200 years old, we were bound to cause a stir somehow. And we did. In our article on 2147 Ridge Road, we focused on the home sitting on the northwest corner of Ridge Road and Dickersonville Road. In the article, we said it was the northeast corner; that was our first error. The second was we chose to elucidate the location by referring to one of Lewiston’s oldest family-run farms, the Raby Farm.

Harry and Janet Raby received lots of feedback on that and reached out to clear the air – and rightfully so. Although our subject house is surrounded by that farm, it has not been a part of the property for a long, long time; and perhaps more irksome to Harry was he never did live in that house. This is a long-running story for him – clearing the air about never having lived there – but the article caused him to receive many jibes about him being wrong. He was not; he never did live there.

Sorry about that, Harry, and thanks for being such a good sport. I hope the record stands corrected.

Now onto the final installment of our run-up to the bicentennial celebration.

The golden age of historical Lewiston came alive from the early-1820s to the late-1830s, when travel through Lewiston was required to get further into the states without hassle. During this period of time, the Kelsey Tavern, on 625 Center St., flourished. Built by Thomas Kelsey around 1820, the tavern was made to accommodate the upper class that visited Lewiston. It had two large ballrooms on the first floor, a second-floor ballroom, and several bedrooms all equipped with their own fireplace.

It is likely that Gen. Lafayette, the famous French military officer who fought in the Revolutionary War, stayed a night at the tavern. He even selected the Kelsey Tavern as the most desirable place to hold a reception.

The tavern was originally square in shape, but this changed when an addition was made in 1866 to the east side of the building.

To add to the myth of this home, when the house was moved back from the street, they discovered a French soldier was buried under the stone floors. Now it is rumored that the ghost haunts the house – and they have even taken to naming it the “Spirit of ’76.” His body still lies there to rest in peace but, when the floor board creaks and strange things happen at night, one wonders if it really is a peaceful sleep.

The building itself has magnificent architecture, which reflects a transition from Federal to Greek Revival, with elements of Italianate and Gothic. The elements that stand out the most are the original staircase with handcrafted black walnut rails and spindles, and a colored glass skylight above it dating to the 19th century. The mantle is ornamented with a pattern of acorns and oak leaves, as well as hand-carved moldings around the doors and windows that are also of particularly high quality.

The antiquity of the house can be seen in the wood work of the older sections, which went through a process that leaves a grain effect and an ochre color. In the cellar, this is particularly clear, because the wood still has remnants of bark and axe marks on it. The high-quality architecture and remnants of its old history combine to create a unique atmosphere in this historic home of Lewiston.

Well, that brings to a close our review of the town’s and village’s oldest buildings. These were standing in 1822 when the village was formally created as a standalone entity. We sincerely hope you have enjoyed the journey. Many Thanks to Tom Collister, curator of the Lewiston Museum; and to Austin Heinz, our intern, who gathered all of the facts and photos from our often-intimidating historical records.

The time is now nigh! Let’s all band together for four days of remembrance of the people and events that make Lewiston’s history so unique and fascinating. For all the details, refer to www.Lewiston200.org.

See you in the park!