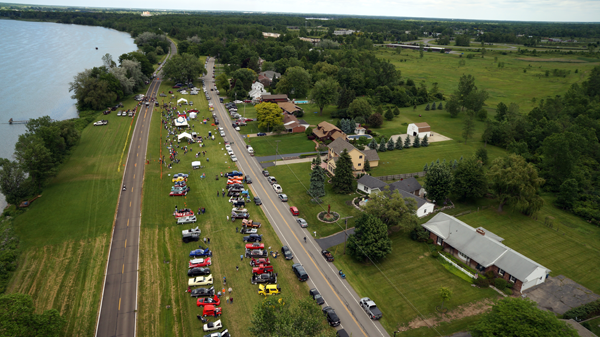 Shown is a file photo from a past Mary Dunbar-Daluisio Memorial Lawnmower Race event.

When Floyd and Chie Doring moved to their home on West River Road on Grand Island in 1976, one of their first acquisitions was a lawnmower. It didn’t take long before Floyd realized that mowing his large lawn with a push lawnmower wasn’t going to be a long-term plan.

“I went out and bought a riding lawnmower,” he said.

Two years later, Doring was cutting the grass on Father’s Day. Doring related his neighbor, Pat Murphy, approached him and said, “ ‘Today’s Father’s Day. I bet I can beat you in a race on Father’s Day.’ And I said, ‘I bet I will beat you.’ And that started the lawnmower race. Two guys. Me and Pat Murphy.”

Doring said that he won the race that year.

The competition between the neighbors continued on an annual basis. By the third year, Doring and Murphy began using the race as a fundraiser, with the money going to a charitable cause.

“It wasn’t a lot of money, but I went over to the brewery in North Tonawanda. It was on River Road, and they donated a keg of beer. We sold the beer, and the money went for Children’s Hospital,” Doring said.

The event began to grow, with other people, such as the late Gene Roesch (father of former Councilman Gary Roesch), joining as “our first really official starter,” Doring said. Money raised in 1981 was used to purchase a Jaws for Life for the Grand Island Fire Co. By 1989, approximately 50 people were racing both push mowers and riding lawnmowers. West River Road was closed down, as the lawnmower races had become an event. And then, the lawnmower races came to an end.

Twenty years passed with no lawnmowers being raced along the West River. But then, in 2009, the situation changed. There was interest in restarting the races as a fundraising event. According to Doring, he was approached by the late Mary Dunbar-Daluisio, who asked him to run the lawnmower races as a benefit for Relay For Life.

Doring said that, after the lawnmower races became part of Relay For Life, the event “blossomed.”

Today, the Father’s Day event, now called the Mary Dunbar-Daluisio Memorial Lawnmower Race, is an integral part of Relay For Life. It has expanded beyond two men competing to see whose lawnmower is the fastest, and it now includes a kids’ lawnmower race, a walk/run competition, and, of course, a series of lawnmower races. All races will occur on the West River multiuse trail between Long Road and Sunset Drive.

The kids’ race is open to children aged 4-10. Plastic lawnmowers, which are also bubble machines that release bubbles when the machine is pushed, will be provided to the children on the day of the race.

According to June Crawford, president of the West River Homeowners Association, “There is one race with regular lawnmowers and a race where people soup up their lawnmowers. This one guy last year went 95 miles an hour down West River Road.”

Crawford said she wasn’t always sold on the idea of lawnmower racing. “I had just moved to the Island, and someone told me about these lawnmower races, and I thought, ‘What kind of community did I move into?’ ”

Jim Mazza, who noted he began participating in lawnmower races in 1985, said decorating lawnmowers is a big part of the event.

“One thing that I do every year is I put together a lawnmower with a whole bunch of stuff,” he said. “One of the things that I put on the top of it is a helmet from Grand Island High School with the horns. It’s to represent the Viking. And then, I put the sign that represents the donations that we get. And then, a lot of Fourth of July stuff. Flags are a big thing. I have three sons-in-law, so I have the three flags that represent their ethnicity. There’s a Polish flag, an Italian flag, and an Irish flag, and, of course, an American flag. And I’ve got to represent the Bills.”

Doring said that he, too, will decorate his lawnmower and that he will have a special guest drive the lawnmower. Caesar Silvetra, a former exchange student from Brazil, who attended Grand Island High School in 1975, will be the guest driver.

“He is a Supreme Court judge in Brazil,” Mazza said.

In addition to the races, there will be a vintage car show, which will feature cars, bikes and trucks. This will be held on the grass median between 10 a.m. and 2 p.m.

Registration for the Mary Dunbar-Daluisio Memorial Lawn Mower Race, as well as for the Kevin Doring Memorial 5K Walk/Run, will be held at 9 a.m., and the cost to enter is $10. There will be no charge for the children’s race. A drivers meeting is scheduled for 10:30 a.m., and mowers will be tested at 11 a.m.

Food will also be available during the event. Between 10 a.m. and 2 p.m., hot dogs, hamburgers and beverages will be served. According to Doring, Supervisor John Whitney will cook the food, which will be served by members of the West River Homeowners Association.

There will also be a yard sale, Crawford said. The sale will feature “all kinds of things that are left from the Historical Society garage sale. Whatever we don’t sell will go to the Amvets.”

This event has already received donations, including $1,000 from Michael Manuszewski, pharmacist at the Island Prescription Center; and four $50 gift certificates from Gui's Lumber and Home Center. 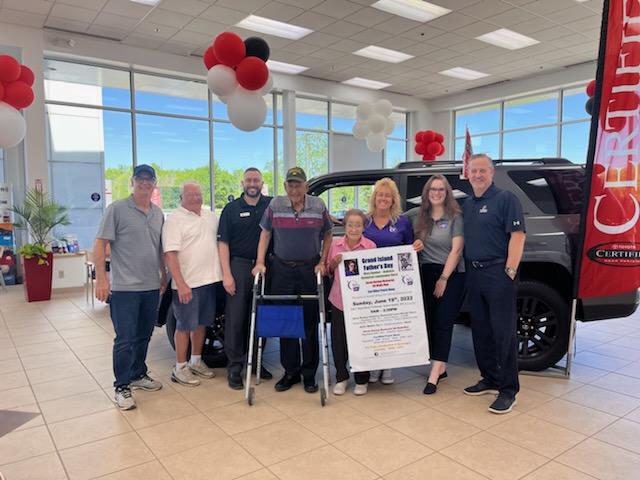 A check presentation took place Tuesday at Fuccillo Toyota on Grand Island. The dealership is sponsoring the 20th anniversary Relay For Life weekend, with cars on display at the “Taste of Relay.” Fuccillo also is a silver sponsor for the Lawnmower Race, an advertising sponsor, and is sponsoring the hole-in-one contest at the golf tournament on Monday at River Oaks – with $50,000 going toward the purchase of a new vehicle with a hole-in-one. Pictured are Caesar Silvetra, Gary Roesch, Russell Tabone, Floyd Doring, Chie Doring, Lynn Dingey, Dylyn Harrison and Tom Fogarty. (Submitted)