Jack Bedell and Curt Nestark with the Bedell House lithograph at the Grand Island Memorial Library, where it is being displayed.

Story and Photos by Alice Gerard

The story of the Bedell family, told through memorabilia dating back to the 19th century, was told by Curt Nestark, president of the Grand Island Historical Society, at the annual meeting of the Friends of the Grand Island Memorial Library on May 19.

Ossian Bedell, who was an attorney, “put a book together advertising how nice the hotel was, how clean the water was, no mosquitoes. You could ride your bike around the Island. Rent a carriage, rent a horse and catch a ferry,” Nestark said.

Bedell listed all of the ferries available for people to travel between Buffalo and Grand Island, Nestark added.

Years later, the Bedell family memorabilia was in a garage in the City of Tonawanda, saved in trunks and boxes by another Ossian Bedell, known as “Osh,” who had been the owner of the Bedell Coffee Shop in Tonawanda before he passed away in 2001.

At one time, Bedell lived on Grand Island, and his family owned some property. His nephew, Jack Bedell, who was at the meeting of the Friends of the Grand Island Memorial Library, said he remembered, as a boy, spending time on Grand Island.

“We had some property on Grand Island on Bedell Road,” he said. “It was left to my father and my uncle. It was an orchard-like type thing. We would go over there. There was a house there that my family rented out to people. Eventually, my uncle Ossian, who was named after Ossian, lived there for a while. He remodeled it and lived there for a while until they goofed up with the highway over there. He used to like the dock over there. Then he moved over to the other side of the Island. He had a nice house there.” 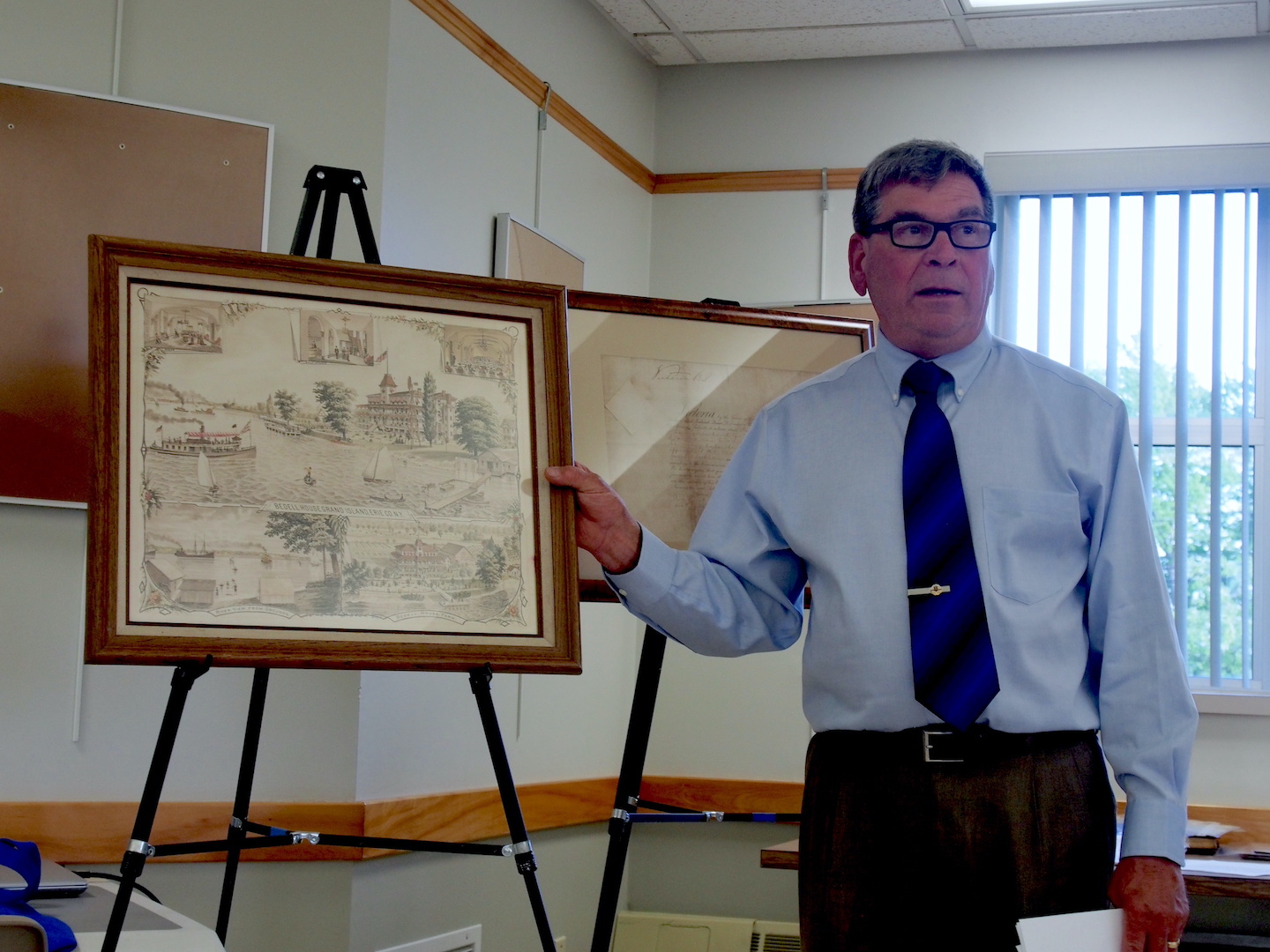 As a young adult, Jack enjoyed visiting the Bedell House Annex: “The hotel wasn’t around. The only thing that was around was the annex. It was a bar and a place that I went to when I was 18 years old. They could drink then at 18. We all kind of hung out there. We never really owned that part of it.”

“So, my family, my father John Bedell, we never lived on Grand Island. We always lived in the City of Tonawanda,” Jack said.

Osh Bedell maintained a collection of a large quantity of memorabilia related to Grand Island. Jack said that, after Osh passed away, he and other family members discovered of all of that memorabilia.

“We went through his (Ossian Bedell’s) whole house and into the garage. He had all this stuff in boxes and old trunks,” Jack said. “I went through it and said, ‘You’ve got to save this stuff. It can’t go out to the street.’ So, I took it all over to one of my buildings, put it in the garage there for safekeeping. It was safekeeping at the time.

“Then my son, Joel, got married. He and his wife bought a house next to Curt. They got to talking, and my son, Joel, said to Curt, ‘Call my father up. I think that he has some stuff you’d be interested in.’ So, Curt did. He made arrangements. He came down, and the first thing I saw was that lithograph of the picture. He just fell in love. I kept bringing stuff out of the garage. He kept putting it into his truck and took it over to the Historical Society.

“I’m very happy we did that. It’s in safekeeping there and it’s on display, as it should be. I don’t know how long my Uncle Osh had it in trunks in his place. Probably a long time.”

A year after Nestark picked up the Bedell family memorabilia, the garage where it had been temporarily housed was destroyed in an arson fire. 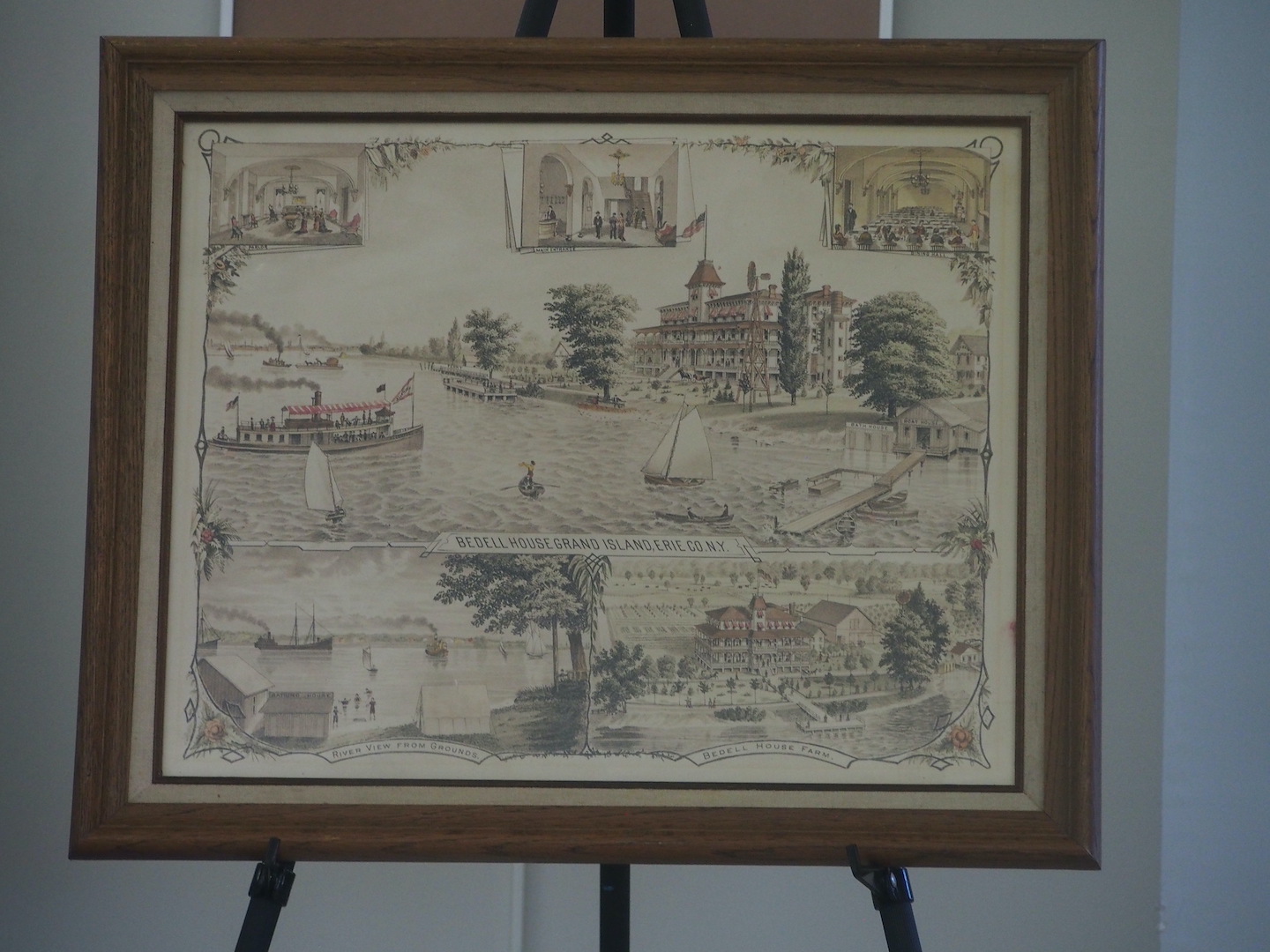 Image of the Bedell House, donated by the Bedell family to the Grand Island Historical Society.