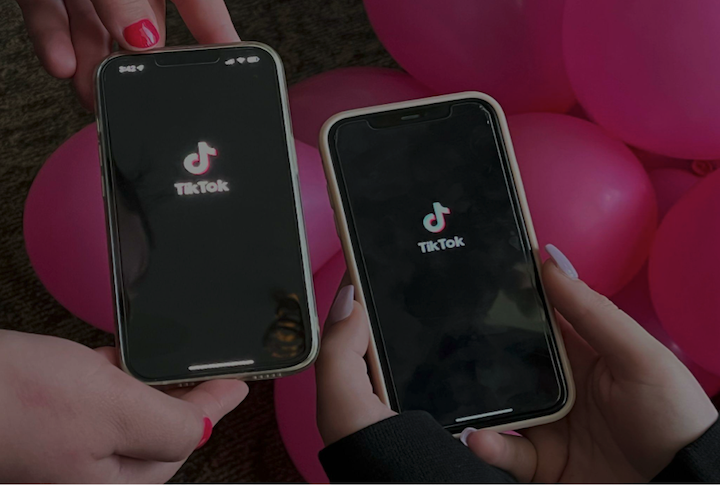 TikTok started as a brief swipe on your phone to find endless videos, getting you captivated by 15-second-long clips of funny, charming, quick content. As the app progresses, people are getting more and more preoccupied with scrolling. It is a quick way to look at certain trends and basically what other people are up to.

Many people have even gained fame from this app, considering it can give you a pretty big audience if you create the right content and attract the right viewers. Young content creators on this app have now achieved goals nobody ever expected coming from an app or even 15-year-olds in general. Videos can range from cooking, jokes, music, decorating, dancing, singing, tips, etc. You can find everything you are interested in and more on this app! The downside? It's distracting.

Consumer engagement is perfectly sculpted in this app since it is portrayed to be used as a quick laugh. High consumption has more than likely affected everyone who has this app downloaded in many ways. Some may not even be aware that they have a connection to the app.

Donna Fisher-Thompson, professor of psychology at Niagara University, speaks out about the mental and physical effects of scrolling mindlessly on social media.

At a faculty senate meeting, there was a presentation on first-year students and seniors, “We looked a lot better in 2018 than we did in 2020. Two-thirds of these college students had higher rates of mental and emotional exhaustion compared to two years ago, and half reported increased anxiety and ability to concentrate,” she says, in regard to social media consumption.

So, what crosses the line from casual to concerning with students’ usage of social media?

“Questions have been raised in studies about losing track of time, not getting work done, and thinking about what’s happening on your social media when you’re not on it,” Thompson says. “The kids who scored higher on these scales showed that, the higher you are for addiction, the higher you are on the anxiety and depression scales. This makes me think, ‘OK, this is probably when it crosses the line.’ ”

“You’re comparing your real life to whatever they’re claiming to be happening. You can’t know what is real. I can see the self-comparison thing,” Thompson says.

TikTok has now turned into a darker, unhealthy, more consuming app, instead of one that just makes people smile.

However, college students have especially been impacted by TikTok. Some students say it distracts them from schoolwork and makes them lose focus.

“Just the other day, I was trying to study and couldn't put my phone down because of TikTok,” says Emma Schoenfeld, an avid user of the app. Schoenfeld’s screen time on her phone states that she uses TikTok one hour per day. “I'm sure it’s impacted my study skills, if not my grades.”

Dylan McDermott says, “Seeing that my screen time daily average for TikTok is two hours and 33 minutes is not a surprise. Once I get on the app, I cannot stop. The shortness of the videos is probably what makes me continue scrolling. Although, how I have a 13-hour weekly average on TikTok definitely concerns me.”

The two college students both realize how much this app has impacted their studies and work ethic.

“My daily average is about five hours and 54 minutes, and it is probably because of how much the videos relate to me. My ‘for you’ page is filled with everything I find interesting, bad or good,” Melissa Mazurek says.

However, some people are not as impacted by this app.

“The only reason why my screen time is so low is that I delete the app often. I personally don't let myself get distracted easily, especially by TikTok,” Chatt says.

She also mentions, “I see how easily distracted my peers are, so I don't even let myself have the option to open the app.”

“I don’t have time to do this, and I can’t get myself to get caught up in other people’s lives.” Dr. Thompson says.

So, what opinions do these users have to stray people away from TikTok?

“I think it would be easier if I started using a time limit. If I set a time limit on my apps, mostly TikTok, I would remind myself that I have other important things to do, like school work,” Mazurek says.

“It is harder to stop than to start, so I would just have to focus on keeping my phone out of my hands,” Schoenfeld says.

“I think it just depends on the person. You have to want to stop in order to make it happen. So first, they have to realize how much it is impacting them. Then, they can figure out what is best for them,” McDermott says.

“Making them feel guilty, I think, for using the app would help. Reminders of how much they have been on it are useful. It all depends on the person’s self-restraint, how motivated they are, and the goals they have,” Thompson says.

How should we feel about our future children? Scared? Since they will be brought into a world where they only know of social media as entertainment, these users are even more concerned about the children than themselves.

“In my future, I honestly don't know if I will let my children have TikTok after seeing how much it has affected me and my friends,” Mazurek says. “Even simple apps, like YouTube, concern me. I don't want them to think that is the only way they can entertain themselves.”

If TikTok is affecting college students, we should be questioning how it is affecting younger children and their developing brains. Although many users find TikTok to be a safe way to communicate and laugh with their community, it has to be looked at as an addiction. This can prevent younger children from forming bonds with social media and depending on apps for comfort.

“With what people are posting, saying about other people, and how it affects middle school kids or high school kids, do you really want a child to have access to these things?” Thompson says.

“I don't want to give my child something that changes my attention span and ability to focus at 20 years old,” Mazurek says. She is devastated anxious, and mournful for what's to come for younger generations.

“I think we need to come together and realize how much this is affecting our health, futures and overall lifestyles,” McDermott says.

“How is this going to get under control someday, or is it already out of control?” Dr. Thompson asks.