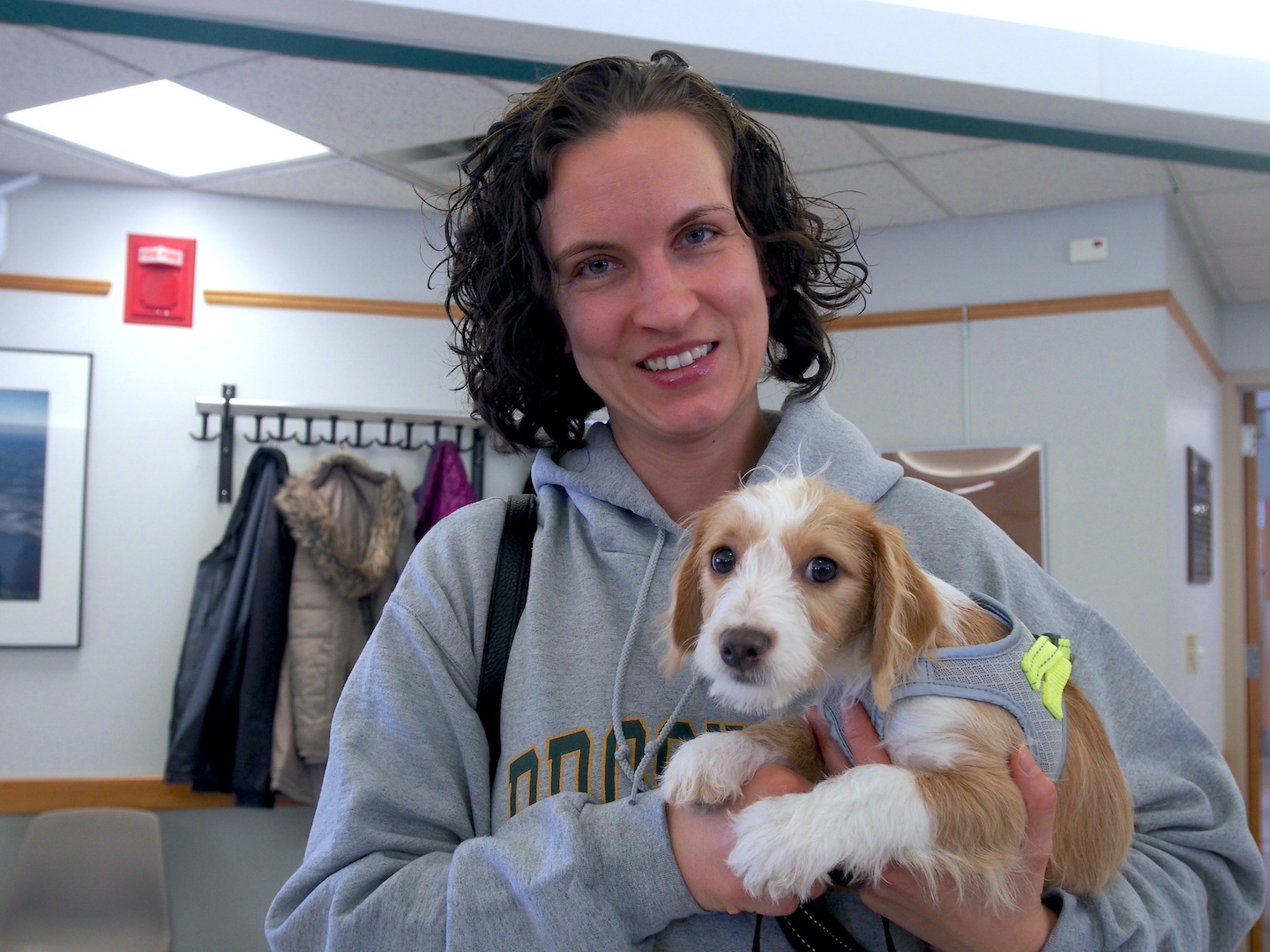 Ashley Kraska with her most recent foster puppy.

Story and Photos by Alice Gerard

On Feb. 26, visitors to the Grand Island Memorial Library had the opportunity to meet a puppy being fostered by a volunteer with Diamonds in the Ruff animal rescue, as well as support the organization through the purchase of shirts, hats and other merchandise.

According to Stacy Rainey, community outreach coordinator for the rescue, Diamonds in the Ruff is a Niagara County pet rescue that was established in 2011.

“Diamonds in the Ruff is an animal rescue that deals primarily with dogs and cats, and it’s a foster-based rescue, which means that they don’t have a facility where people can go and view the dogs and cats, so we do heavily rely on the community for fosters and things of that nature,” she said.

Rainey first got involved with Diamonds in the Ruff in 2014 when she fostered and then adopted a pit mix named Bianca. Since then, she began working as a volunteer with the rescue. “The way I pay them back is to give them my time. Bianca is such an amazing dog. As much as we’ve helped her, she’s helped us.

“We were looking for a companion for our other dog, Moose, that we got from the SPCA. They hit it off beautifully. They are pretty inseparable, which is great. As long as those two get along, it was easy for us because we’re animal lovers. When we met her, she needed two ACL surgeries. We fostered her, did a fundraiser for her for the rescue to pay for it. She is a super sweet dog. All love. All white with a little black patch. She loves to give you kisses. She has the cutest little prance. In that time, I wasn’t working, so we spent a lot of time together, and I fell super-duper in love.”

At age 10, Bianca is “slowing down. She has cancer, so her time is pretty limited with us here, so I’m trying to take advantage of everything that I can with her.”

Rainey said she encourages people to foster cats and dogs: “Fostering is something that is definitely needed. The rescue pays for everything. They pay for medical and supplies and the vet visits. Foster homes do get checked to make sure that the foster home is suitable for the animal. It is kind of the fosters’ responsibility to put their animal on social media for events such as this, to help show them. We do have a website, but it’s hard to get an animal adopted only through that. We have the presentations that we do.”

Stacy Rainey poses with merchandise sold to raise money for Diamonds in the Ruff, as well as with Ashley Kraska’s foster puppy. This puppy had gotten so much interest by potential adoptive homes that the rescue removed his picture from its website.

Volunteers from Diamonds in the Ruff, which is a volunteer-based nonprofit, travel around Western New York and visit such places as the Grand Island Memorial Library, bringing animals for people to meet, merchandise to sell, and information about how to adopt a new pet.

Rainey said that, for people who are thinking of adopting, “Do your research. People should understand exactly what they are going to get, especially with dogs. There are a lot of pit mixy dogs, but there are other breeds. Make sure you know the breed and what you’re getting into. Also, the house checks are done, and the reference checks are done. To adopt, it’s going to take someone who has a lot of patience and is an animal lover. The biggest thing that I could say for a potential adopter is to do your research and be ready to commit, because owning an animal is a commitment. It is lifelong, however long that life is.”

For people who are interested in adopting a senior animal, Rainey suggested, “It’s quite an undertaking, because you know that you are with the animal through its golden years – however long that is. It could be another year. It could be less than that. I think that, if someone’s taking on a senior animal, obviously we applaud them for doing that, because it is probably the best thing – not only for the animal but for them. When they get to a certain age, they start to realize how fortunate they are. Then they hopefully offer a lot of love. I think that, if you take on a senior, you also have to be ready to take on the responsibility of medical expense.”

Ashley Kraska and her husband, Matthew, have been fostering puppies with Diamonds in the Ruff for the last year. In the past, the couple fostered dogs with a Rochester-based rescue called Big Dogs, Big Hearts. She described the first dog that they fostered, a dog named Pebbles, as a “foster failure.”

“My dogs are particular,” Kraska said. “One has medical needs, so I’ve only taken puppies so far. My first foster, I failed. I kept her. I tried not to, but I did. We got her in April, and it was in November that we decided to keep her. She just fits in.”

Since she fostered Pebbles, she has fostered other puppies. “Of the six fosters, I’ve only kept one,” Kraska said.

For more information about Diamonds in the Ruff and about the 68 dogs and cats currently available for adoption, check the organization’s website at https://diamondsintheruffanimalrescue.rescuegroups.org/index.php.